another dish that came about the ways of what do i have in the fridge/pantry...there was a package of cold smoked salmon that needed to be used, too much rice in the pantry, still some dried wild mushrooms (they seem to last forever!), some parmesan that was almost too hard to grate...is there a recipe in this? hmm, sort of. if fish isn't your thing, just omit it, recipe will work without it 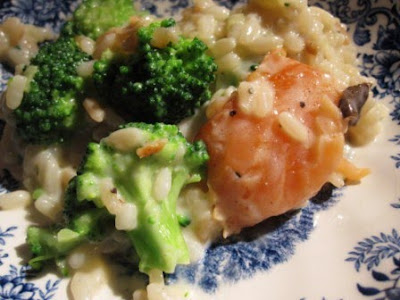 i used risella-brand risotto rice and followed (loosely) the package instructions on how to cook it. other than the rice i used: 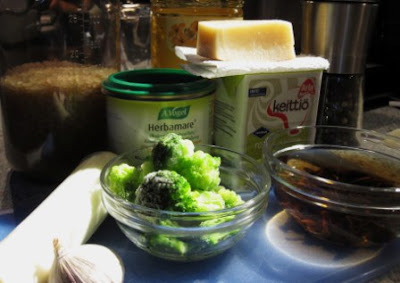 started by sauteeing the rice in oil until opaque, then added the leek, garlic, mushrooms with the water they soaked in (full of flavor) and 2 dl of the stock (kept it hot during cooking), mixed and let cook until most of the stock had absorbed, kept addind stock as need until most of it was used 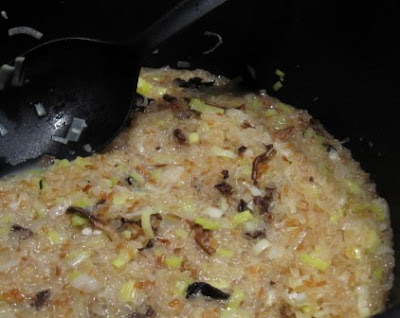 by the time the rice was almost cooked (time depends on what kind of rice you use) i added the semi-thawed broccoli and cream... 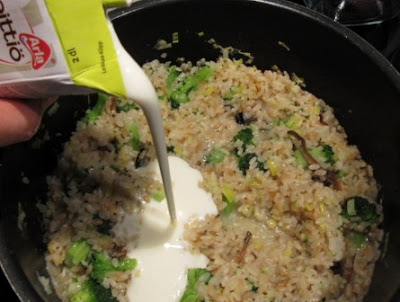 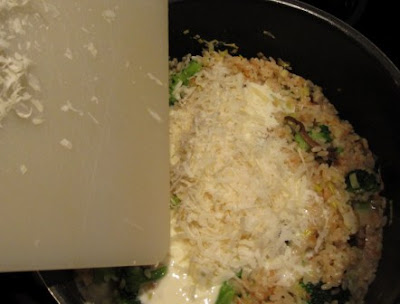 ...and the salmon. i find the easier (and tidiest) way to chop is to just remove the top plastic of the package, leave the fish on the bottom part of package and chop on it. i buy my salmon sliced so very roughly chopping it to pieces will suffice. the fish will flake further once mixed into the other ingredients. now, if you want you salmon fully cooked leave it on the warm stove for a few minutes. i like mine a bit rare, also, i didn't want to cook the broccoli any further, it had time to thaw completely int eh pan, cooking it any further would have made it mushy, and that's yacky (at least i think so). i took the pan off the stove and gave the pepper-mill a serious workout.

did i forget the salt? nope, like always and even with rice, i very seldom use salt when cooking. i find it's easier to add saltiness later, each according to their own taste, whether it be maldon salt, soya- or fish-sauce. and let's not forget, there is plenty of salt in the salmon...

like i mentioned above, this works well without the fish. you might want to add more leek and maybe an onion for more flavor. 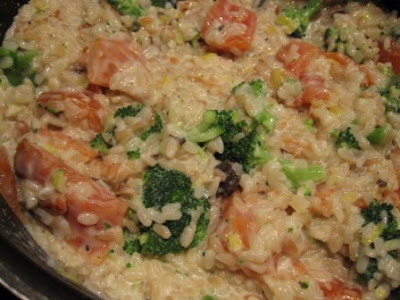