zucchini frittata, fresh from the garden

i was so happy with the frittata i made at the cottage some time ago, i wanted to try if zucchini would make a decent filling for one. first, i have to complain a bit...gardening this summer...oh, boy, took forever for everything to get going because of all the rain and chilly weather. in my book +8C on a july morning is chilly. now that the weather is finally getting a bit warmer, everything is puffing up in record time. like my zucchini, just last week they were tiny, barely bigger than my thumb, this week they are almost bursting at their seams! 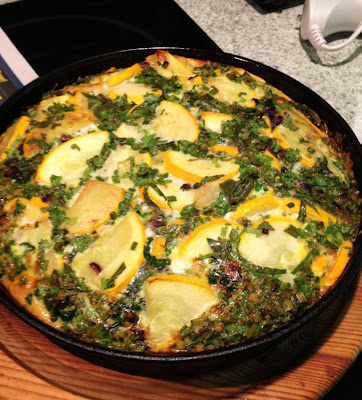 took out my late grandma's well seasoned cast iron pan and placed it in cold oven, then cranked the oven to 220C. rinsed my veggies (zucchini, kale (which grows like crazy), radishes (certain someone eats them as they are), chives, oregano) 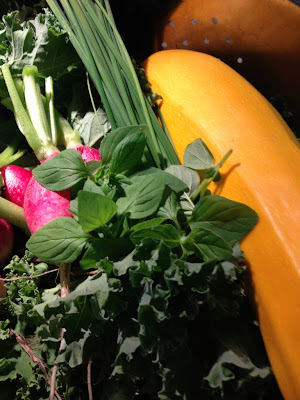 quartered the zucchini and sliced each quarter, placed them on a hot pan with 1 tbsp canola oil (i didn't know until recently that canola oil is plain old rapeseed oil, but that that name isn't used because of what the first part of the name implies), and browned the slices for 2 mins. too long and you end up with zucchini mush, you don't want that, all the goodies, vitamins and such, will disappear. remove the slices from pan and keep aside. 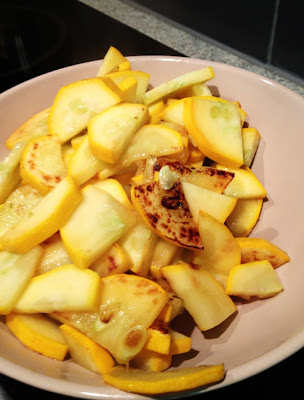 next placed the roughly minced kale on the hot pan, added ½ dl water and steamed the kale just so, keeping it still bright green. again, too long and all the goodies go elsewhere. you won't believe how good the kale is, compared to the green things you get in the winter. and aren't i lucky, the deer nor rabbits have found them! yet... 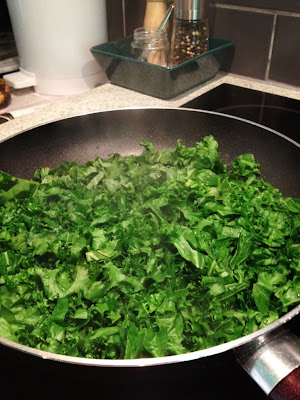 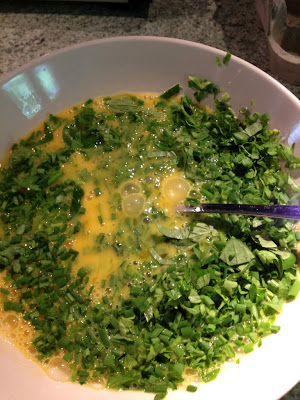 ...took out the by-this-time very hot pan from the oven, first layered half of the zucchini on the pan, then all the kale, then sauteed red onion (red only for the fact that there was half of a big one left and i wanted to use it, 1 medium white minced is good replacement) (oh, forgot, i did sautee the onion until translucent, and it pays to drain the kale, otherwise you'll end up with soggy frittata.) 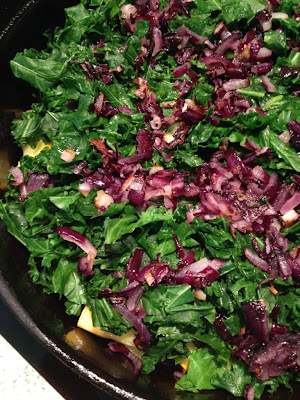 rest of the zucchini went on top... 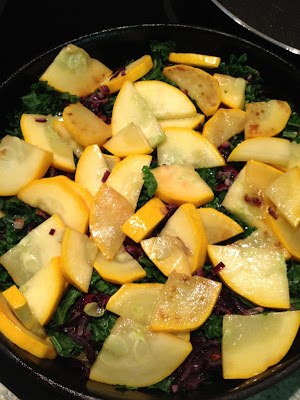 ...then poured in the egg-herbs mixture, and wiggled the pan in order to get the eggs to go everywhere. placed the pan back into the 220C oven for 25mins. 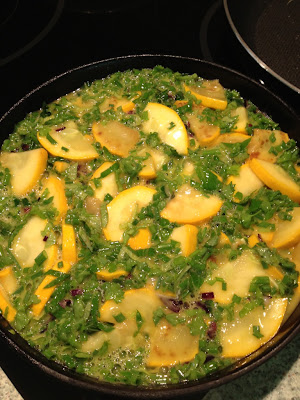 this makes a light lunch for 4, we had it warm with tomato. later in the day i had a piece straight from the fridge, equally tasty. i only added salt (maldon flakes) while eating, little salt goes a long way like that. however, i will admit that not using salt while cooking takes some getting used to. 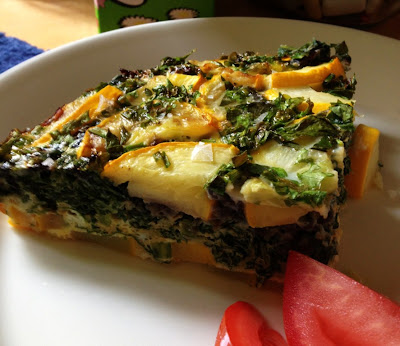 oh boy, summer leave is gone, days are getting shorter, it seems nothing gets done and i'm generally feeling "quite not right". i'm trying to tell myself that "it's just life, get over it".

anyways, certain someone wanted to see this band perform and i had kindly agreed to go with him. it had been a glorious day (i was told, was working indoors) and the evening looked pretty decent at 7pm when we were walking past the helsinki cathedral towards kaisaniemi puisto where the band was playing. 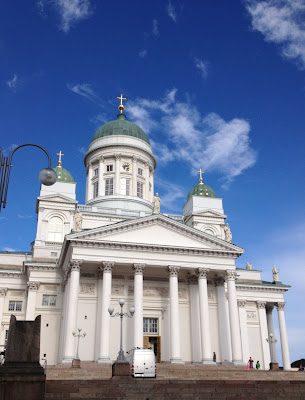 did i just say decent? that cloud looked menacing, but not to worry, i had my umbrella with me. 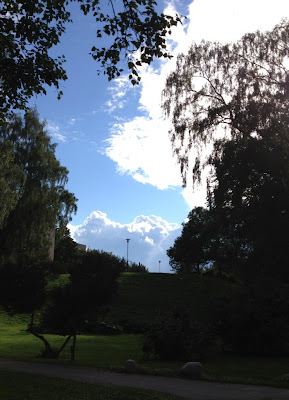 "there will be security checks at the gate". great, had to give out my umbrella. luckily i had one of those disposable raincoats in my bag, pretty hard to cover two persons with it, though. we weren't that badly soaked...yes, it rained, on one occasion pretty heavily... 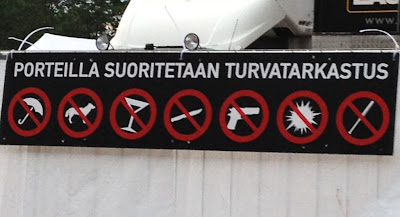 no introductions needed, i presume. 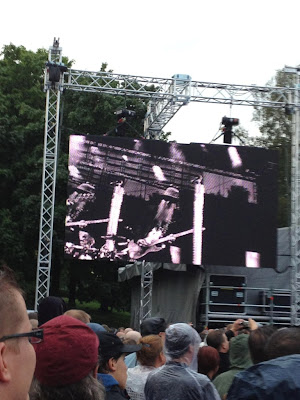 those guys started playing in 1979. i think they must have been growing out their beards ever since...

certain someone says they played well and precise, not like on some gigs he's watched on youtube. i think they were loud, but it was a ROCK concert, and maybe possibly i should have known that and brought ear-plugs. 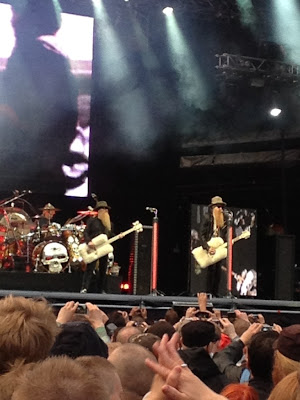 the band was closing just before 10pm, and we headed home before the crowds. this ugly, boxy building is the annex to kansallisteatteri (finnish national theatre). the orinigal theatre was finished in 1902 and i wish the 1954 annex had been true to the style of architecture of the original. maybe that's just me.

on the right helsinki central railway station, on the left apartment buildings. 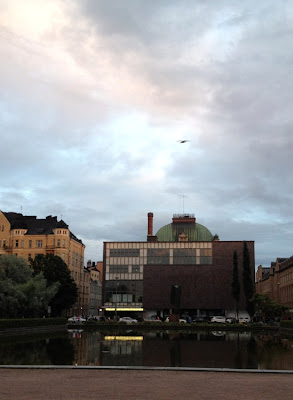 walking towards the car thru kaisaniemi park the setting sun was finding its way thru clouds and trees. by the way, do NOT go there after dark, unless, of course, you're very tired of life, seek extreme excitement, or you're martial arts expert. other than that, you might loose your last penny. 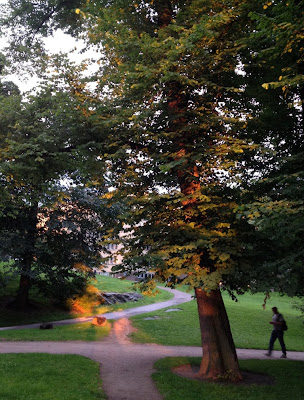 "some day I will ignore my doubts". no one knows who put it there, here's better pictures. 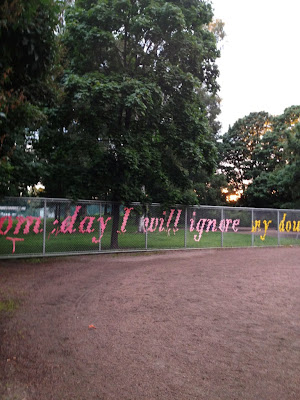 the top of helsinki cathedral was also basking in the setting sun... 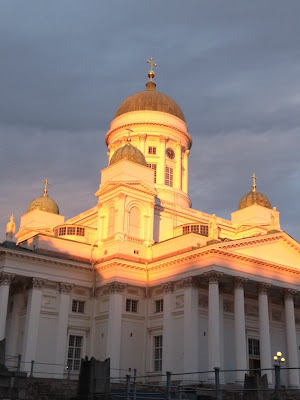 ...and made a reflection on the windows of the national library of finland. 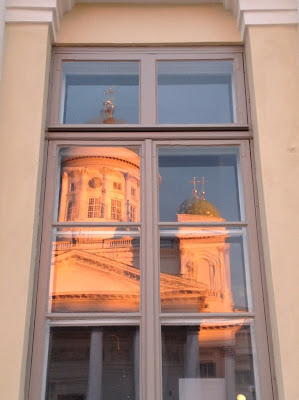 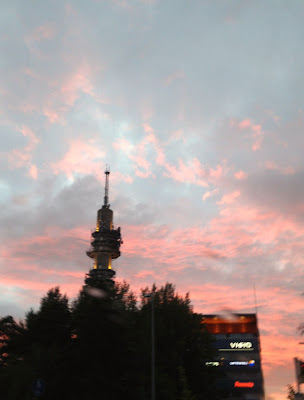 ps. while i've been sitting, editing, writing and whatnot, the dog has been in and out the house several times. i wish i could get it on tape, he rings the door bell, quite vigorously, if i don't go to the door fast enough. indoors he bores pretty quickly, if/when i ignore him, and wants to go out...only to ring the bell 15 mins later.