salmon on fennel and leek

on saturday certain someone had gone shopping and bought salmon and fennel for sunday lunch. i had not felt like eating much all week, let alone cook anything so i was looking for something very easy... 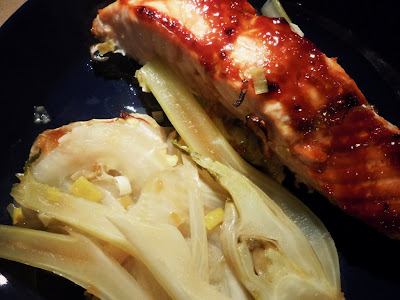 for some reason i've started to like fennel, i figured it would go swell with salmon. there was some leek in the fridge, so that went in as well. 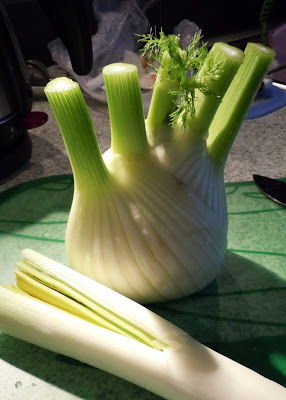 sliced the fennel lengthwise, on hindsight, the mandolin would have been very useful in getting nice thin slices and getting everything in the oven at the same time. 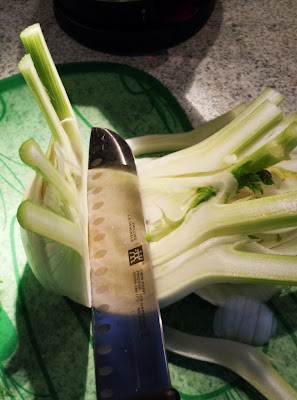 placed the sliced fennel on an oven dish... 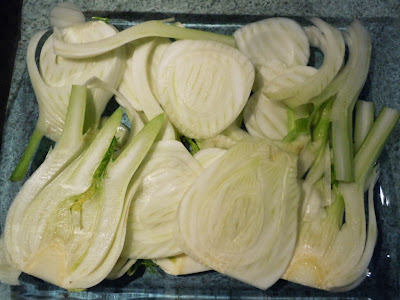 ...and the chopped leek (just the white part) on top, then added ½ dl of white wine (just because there was some left in the fridge) and 1 tbsp of butter and ½ tsp of salt on top and placed the dish into 200C oven for 15 mins. now, had i sliced the fennel much thinner, all would have gone in at the same time. live and learn. 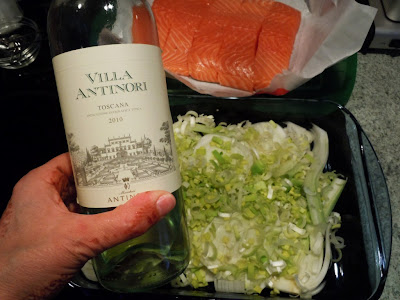 meanwhile, i checked there were no bones in the fish. 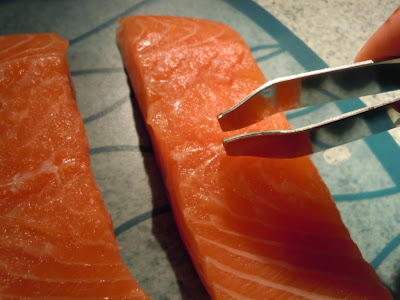 after 15 mins i took the dish out, placed the salmon on top, smeared the salmon with teriyaki sauce (certain someone is daft about it) and placed the dish back into the oven for 25 mins, the last five with the fan on. the salmon pieces were well over an inch thick, if smaller use shorter time in the oven, you don't want to overcook fish, it gets dry. 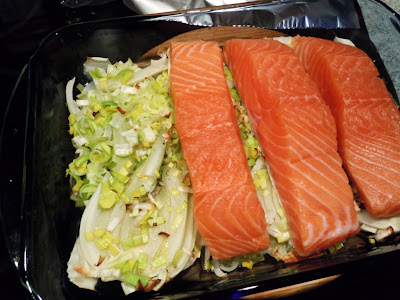 the fish was yammy, fennel and teriyaki are so good together. there was leftovers for lunch today. 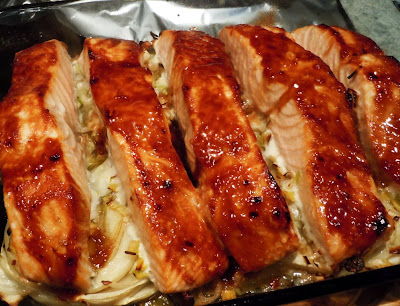 the weather improved much since yesterday and the dog is spending his time outside. 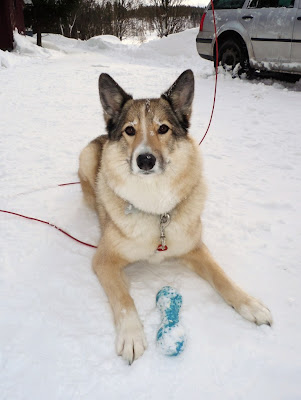 i went out to get the snow off my car, broke a sweat, the flu can really drain your energy. did have some left to throw the rubber bone with the dog for a while. 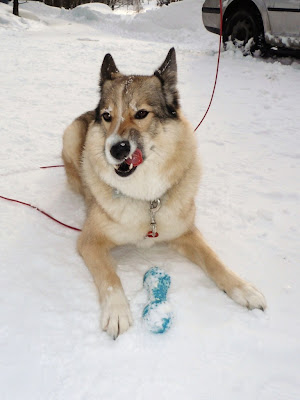 powershot of the dog. 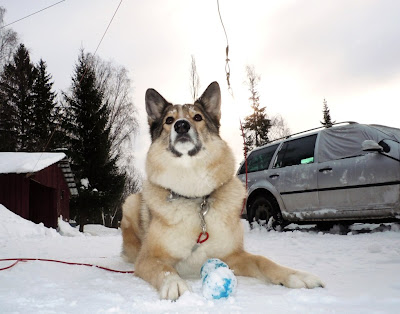 curly oak in the yard. 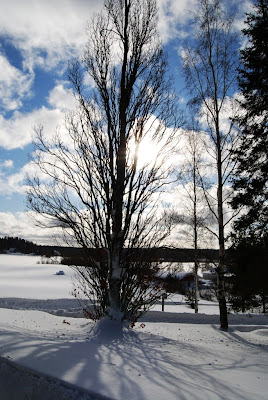 what is this? why aren't we going for a walk? maybe next week, she says, when i'm feeling better, i promise. 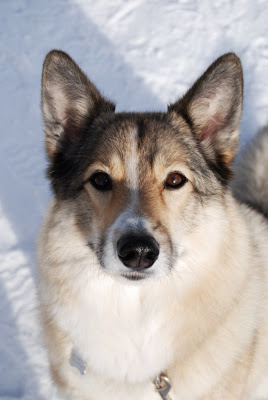 i got back from my trip a week ago monday evening, very tired after long flight and a layover. tuesday morning i felt semi-ok, little tired despite the 12 hr sleep. by tuesday evening i started feeling like the biggest flu is coming my way, wednesday i tried home remedies and by thursday i needed to see the doctor. bad sinusitis and whining in my right lung is what i had and from thursday on, i've more or less been in bed. the doctor recommended nasal irrigation (with the blue device) and i've been drinking blackcurrant cordial as it has lots of vitamin C. i'm starting to feel fairly well, the cough is persistent, though. 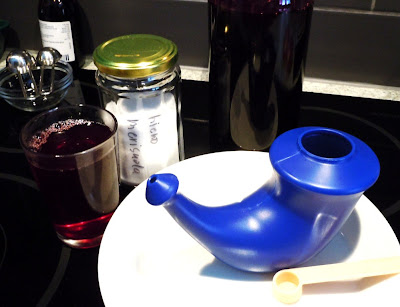 on the evening of my return, the dog used the warm transformer of my laptop as his pillow... 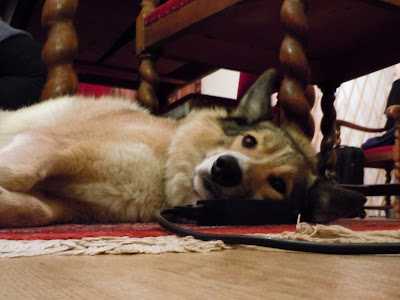 last few days we've been getting more snow than certain someone likes. it seems it's going to snow all day today, already the snow has made strange contours on my car. 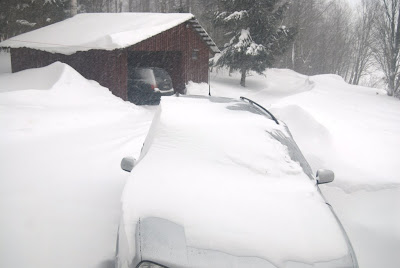 the wind is whisking the snow in every which way... 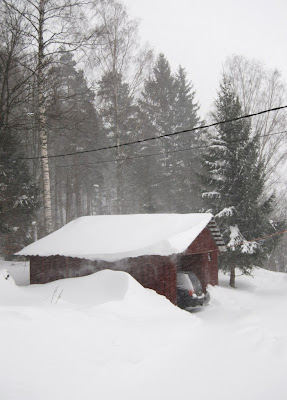 fortunately one of the village guys comes to plough when there is snow. 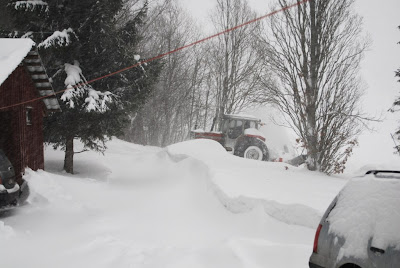 with this type of snow it's best to use the blower attachment in his tractor. 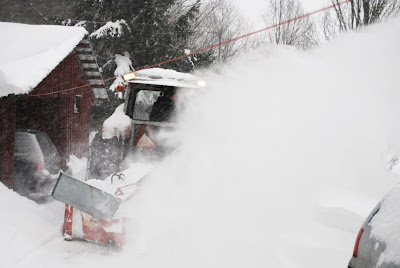 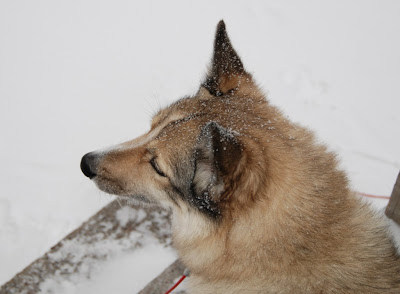 ...and is back in his armchair right after the tractor leaves. 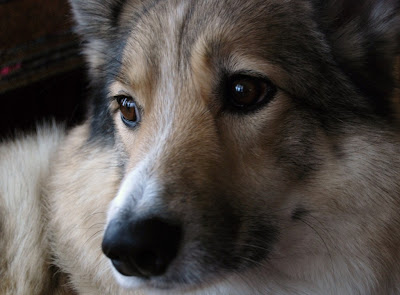 it will take a few more days for me to sort thru the travel pics, will post some later next week.