these snowy pics are courtesy of certain someone, all of them were taken around 1 pm. the slopes have lights on for a reason... 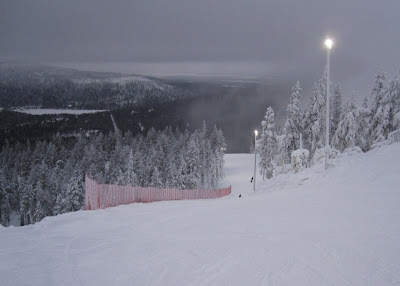 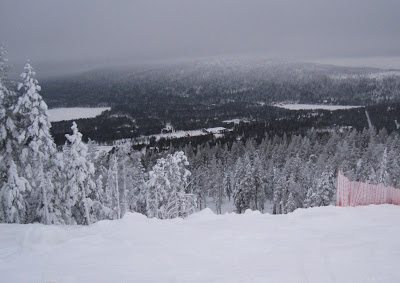 the reindeer don't mind skiers...they dig for lichen under the snow. 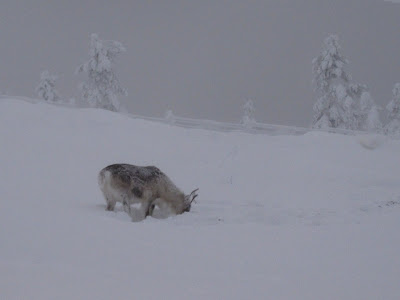 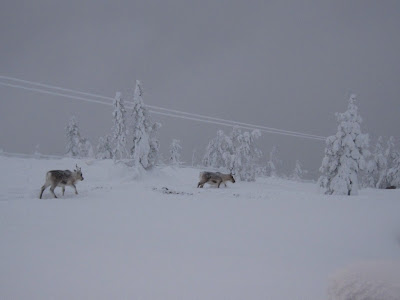 blogger stopped working on my previous web-browser...changed the browser, now the spell-check works! i guess this means i don't have an excuse for bad spelling, i wonder if it'll catch bad grammar, too...

kittilä, lapland, medley of this and that

this picture was taken on new year's eve at 1.19 pm at kittilä airport, the sun had just set and we are waiting for the bus to take us to town. 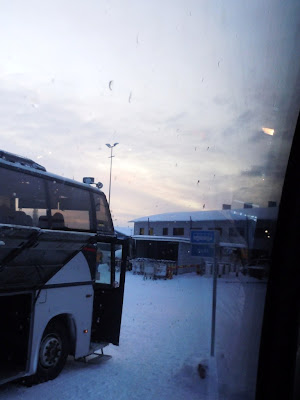 when in lapland, you gotta try reindeer stew with obligatory mashed potatoes and lingon berries, the pickle is optional. 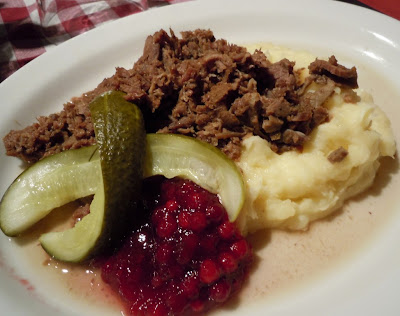 a birthday happened while in lapland, this was the first cake of 2012, lactose and gluten free. the recipe is on the package of cornmeal that was used as "flour". lactose is for some reason problematic for many in finland therefore we are fortunate to have all sorts of dairy products from which lactose is removed. most hard cheeses are lactose free anyway, but there is chocolate, yogurt, buttermilk, cream, ice cream and whatnot. 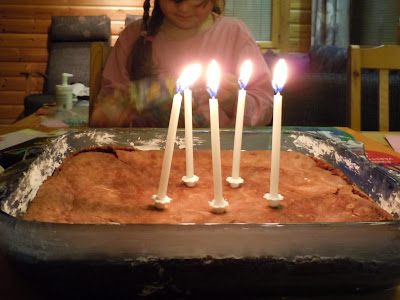 i was surprised that this turned out quite tasty, but a couple of scoops of vanilla ice cream would have...well, made me eat more of it! will try to find the recipe online to post it here later. 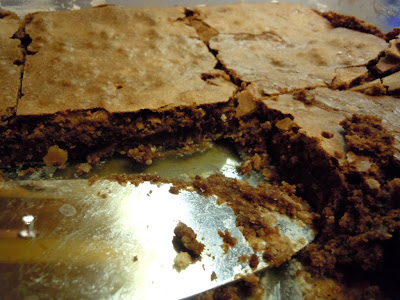 the birthday girl aka the little monkey seemed to enjoy the party, too. 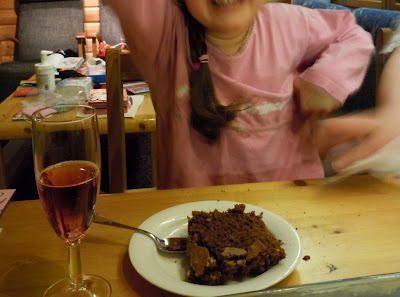 certain someone skied for two days... 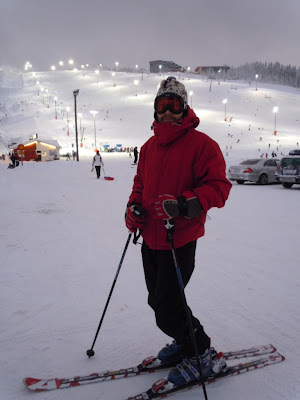 ...i spent my time just monkeying around. there was no way i was going to to ski in the slopes, too many daredevil (read big money will buy the best equipment but no skills) skiers from an unnamed country, and it seems that close to 20 yrs has passed since i last tried cross country. it looks easy enough, but once you're laying on the ground with your feet up and skis in a tangle...not funny, besides, i'm so tall that it really hurts when i fall down. 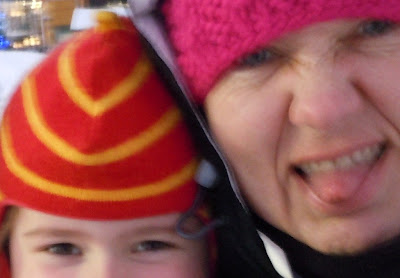 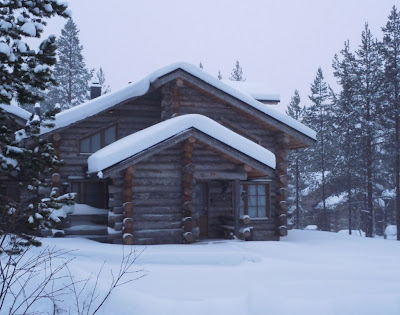 these holiday makers learned the hard way that the sauna really isn't for drying your clothes...

they maybe could have used this felted angel... 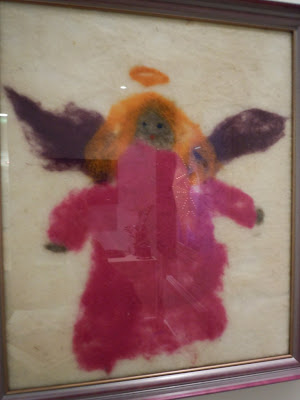 skis used to look like this when i last owned a pair! 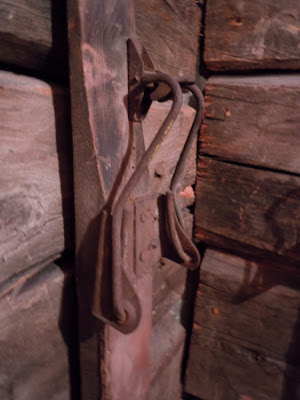 shame this boutique was closed, i eyed that cape...the one pictured was way too small for me but they seemed to have adult sizes as well. maybe sew one myself? 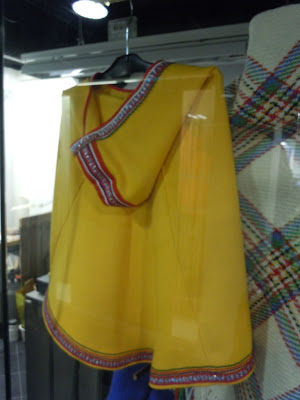 along one street in levi there were numerous shops selling everything lapland, some very touristey. this particular one, the wood jewel had several interesting pieces. all these earrings are made of wood. 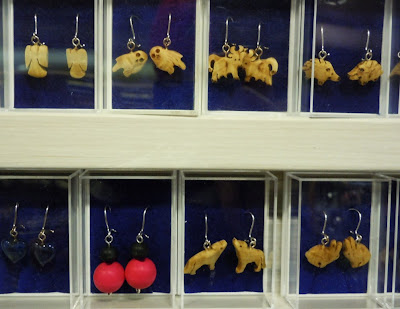 the wood jewel had also a handsome display of knives. the sami knives look really good, but there really isn't that much use for it in the city, and in the city you'll be fined for carrying one... 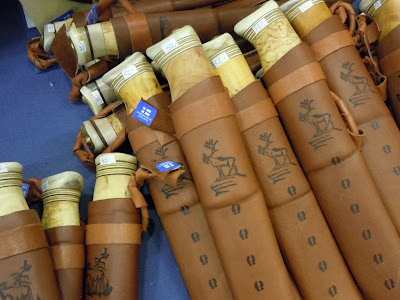 we wanted to get to the kittilä airport in time to avoid a herd of tourists from an unnamed country, they still have to learn what a line is. we did avoid the herds but ended up spending 4 hrs at the airport, fortunately my laptop was fully charged. 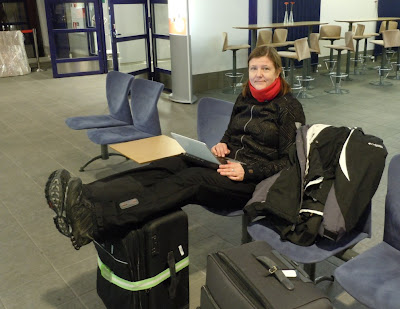 some of the souvenirs, the reindeer droppings are very tasty (liquorice covered raisins), crowberry jam and roseroot syrup, which will keep my stress levels down. the latter will be much needed as i went back to work last week... 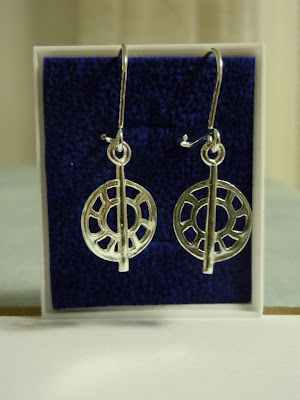 ring from ainut. model "aurinkuu" (sunmoon). the sami have unique designs, as have all other indigenous people. 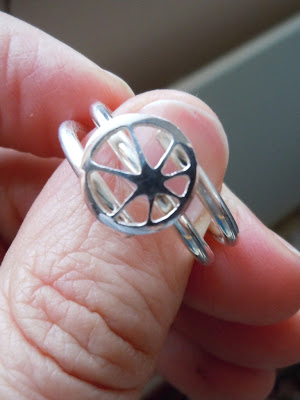 i've been in lapland twice in my life, including this trip. the first time was about 10 yrs ago when we drove thru finnish lapland to norvegian sea in june. there was snow on the ground and smaller lakes were still (already?) frozen, because of snow there were no mosquitoes! i really, really don't like mosquitoes as they get everywhere in a flash. you make the mistake of opening your mouth to speak and your mouth is filled with daily need of protein in the form of zillion mosquitoes. let me be clear, i don't like mosquitoes. so basically, there is no way i will ever go there in the summer.

winter then, with snow, for one hour around noon it's bearable. i have known all my life that it's dark in lapland in the winter and yet the darkness took me completely by surprise. i need light, there was no light and at 5 pm i was ready crash to bed only not to be ready to get up at 9.30 am...

so then, if i ever go there again, it needs to be at a very specific time in the autumn. late enough so that all the mosquitos are gone, early enough that there is still some light during the day, to a destination that isn't a tourist trap.

thank you P for having us!