as there was a lot of left-over, on purpose, of the roasted chicken, there was bound to be a chicken soup... 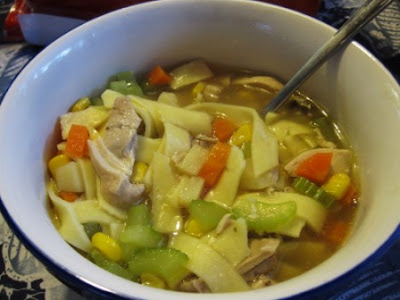 i had saved the scraps from the day before when preparing the veggies for roasting. made the stock by simmering the scraps, chicken bones and skins for about an hour. then strained the solids and skimmed some of the fat on top.

then added a fresh set of carrots, parsnips and celeriac and cooked for 10 mins 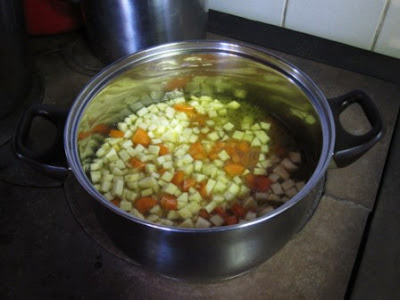 i don't usually go for white pasta, but this fresh fettucine was on sale at the local grocery store, and i thought it would be great in the chicken soup (it was). 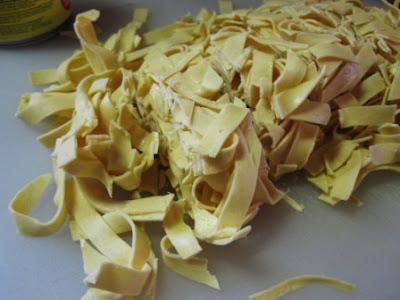 after 10 mins i added the fettucine, chicken, a small tin of sweet corn and cubed celelry (3 stalks) and simmered for 5 more mins.

this batch served the 4 of us at the cottage two lunches. the next day i added a few drops of toasted sesame oil to my portion for a little asian kick... 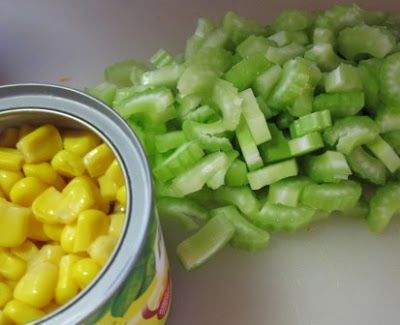 i had wanted to roast a chicken, and make chicken soup, for a while now. brought two fresh roasting chickens with me to the cottage. i end up cooking a lot more at the cottage as there are more people to feed. had these babies for dinner yesterday and they were delish! 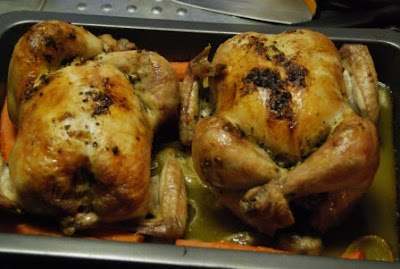 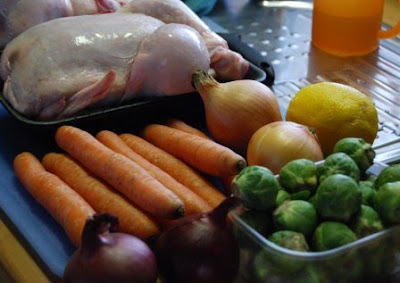 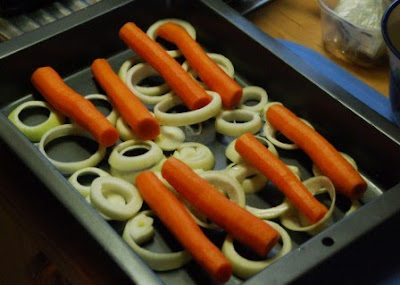 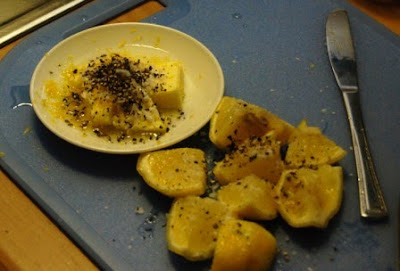 stuffed the lemon chunks into chickens, mixed butter well and smeared it onto chicken before placing them in 200C oven for 1 hr. 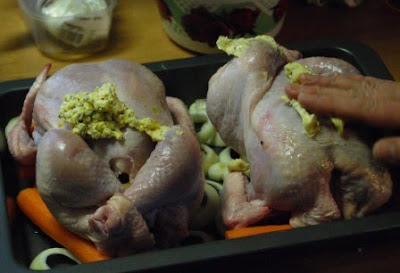 close to when the chickens were done, i started the side dish. first rinsed and halved the sprouts, then sliced the red onions quite fine. 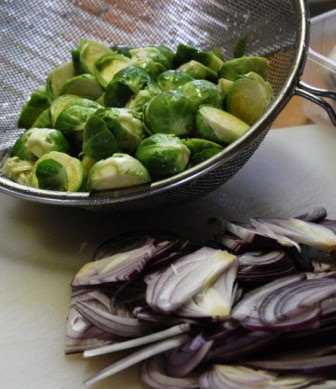 started by sauteeing the onions for a few minutes, removed them onto a plate and first sauteed the sprouts in 1 tbsp butter before adding some water (in two batches) to steam them. when the sprouts were almost done, i added the onions to the pan to warm them. just before serving poured some balsamico on top.

i did take a picture of my plate but i guess i was too hungry to pay attention to its quality...

there was plenty of chicken left over but that was intentional...that was for the chicken soup that i made today (but that is for tomorrow to post about) 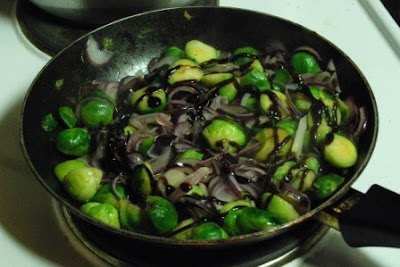 certain someone had asked if there was a reason one couldn't have eggnog besides christmas...well, i guess there isn't. and as there were what was needed, and plenty of booze to choose from... 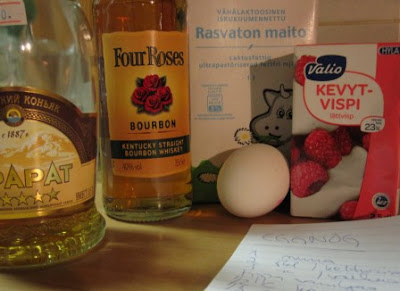 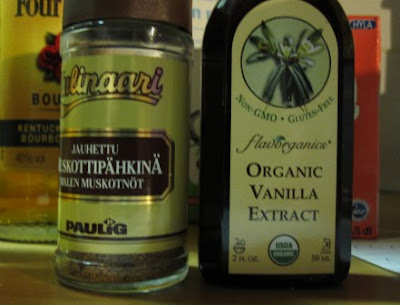 i made what one of the recipes called "one portion"...it made 8 glasses...mom and i both had one, the guys ended up drinking the rest, i think they might have spiked them up, a bit...

my first attemp at eggnog, not bad but overly sweet for my taste. certain someone seemed to develop an addiction... 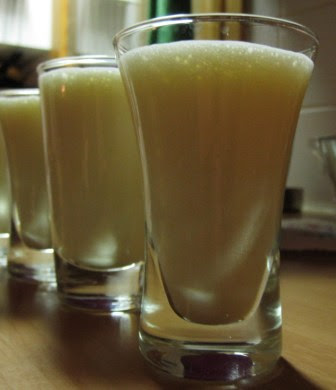 spending some time at the cottage visiting my parents with certain someone and the dog. lunch today was simple and very easy vegetable soup, here's certain someone's portion with a blob of spreadable cheese with tiny specks of smoked reindeer meat. 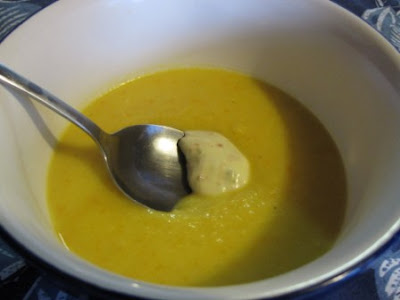 i grated everything with a microplane grater (by now, you all must know how much i like mircoplanes...). if you're worried about your eye-makeup getting smudged, you might want to consider using a knife for mincing the onion...grating it will certainly make you cry (on the other hand, a goog cry never hurt anyone). and for those of you who might occasionally have the need to hide onion in any dish, grating it makes it dissappear... 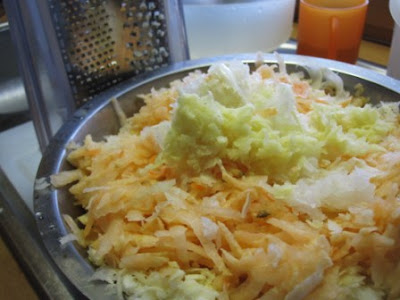 placed all the grated goodness in a pot on the (wood burning) stove, added water to barely cover the veggies and let it simmer for 15 mins... 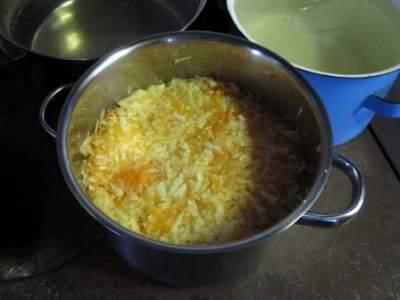 once everything was cooked i took the immersion blender and gave the soup a whirl before adding 1 dl creme fraiche and mixing well. no salt, except for dad who thought he soup tasted sweet... 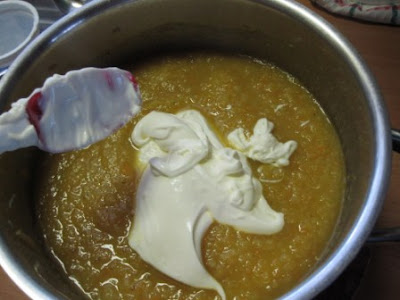 added some crisp bread on my portion. the amount of ginger was spot on, i think i might have added some thyme if not for my dad...there is something about thyme that disagrees with him...or rather, the other way around. 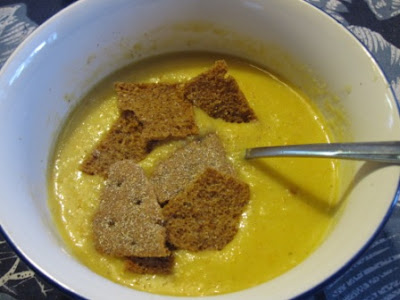