i saw nice big beets in the shop yesterday and borscht came to mind. i bought two kilos because if you make a mess, a slightly bigger mess isn't that much harder to clean up...

started by peeling the whole bunch. in this dry winter weather it paid to wear surgical gloves, no bright red fingers! 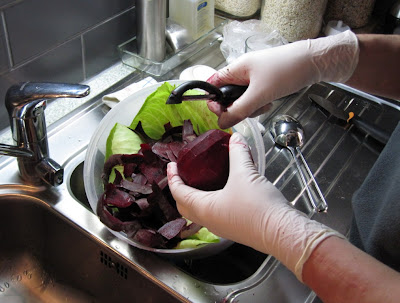 i love that shade of red. on beets, that is, not on me, the wall, my clothes or the rug on the floor 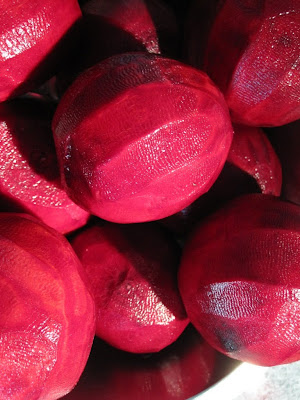 now the mess part... took out my kenwood processor for the grating part. i would have only needed 1 kg of beets for this soup but it pays to grate more 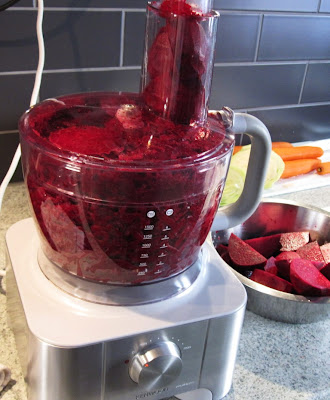 besides having enough for the soup today, i got two 500 gr bags to freeze for later use. only one mess but three borschts (what a mouthfull that word is!) 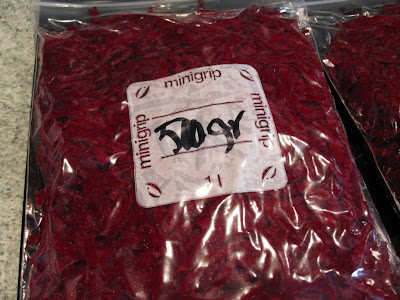 it's also worthwhile to pay very close attention when working with kitchen appliances... i meant to grate the carrots with the same blade as the beets, but certain someone had something very important (not!) to tell and i left the kitchen for a minute.

when i got back, i put the blade on, fixed the lid and 5 seconds later i had sliced carrots. i'm rather proud of myself on not shouting and cursing out loud, instead i counted to 50 by which time i had figured what to do with the sliced carrots. took a knife and kinda chopped them into smaller pieces, not as pretty as i would have liked but didn't want to waste the carrots 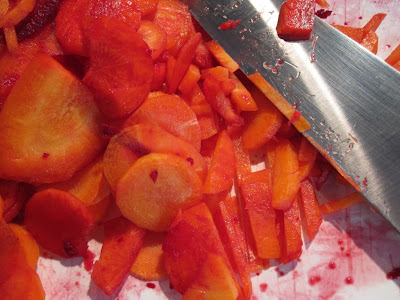 now that the mess section is over... here's what went in

i took out my big pot since i've learned that my soups tend to feed an army. this batch certainly would have, the recipe is easily halved and still feeds four...

put the pot on to heat on medium high, added the oil, leek, carrots and cabbage and sauteed them for a few minutes 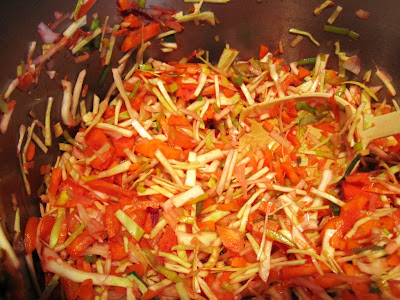 then added the beets, bayleaves, fond, white pepper and boiling water. turned up the heat to bring a boil, then to medium low to a slow simmer 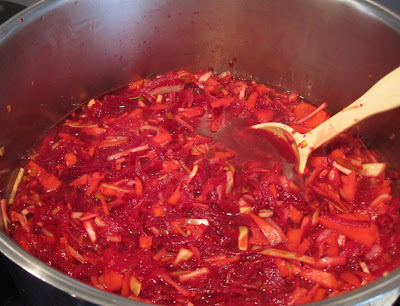 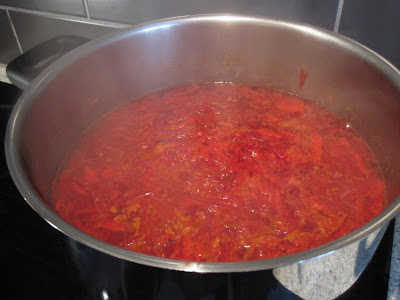 at 45 mins turned off the heat, added the red wine vinegar and parsley 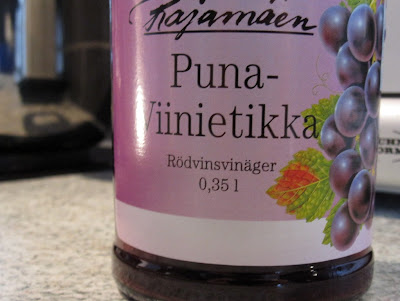 if you're in for the vegetarian version, skip this next ingredient, namely hotdogs! sliced them into 1 cm slices, browned them quickly on a hot pan before adding them to pot.

there was so much that i divided the soup between two pots, the other stayed strickly vegetarian, the other got the hotdogs. i will take some to certain someone's mom tomorrow, some to work and there'll be plenty for certain someone to eat as well. 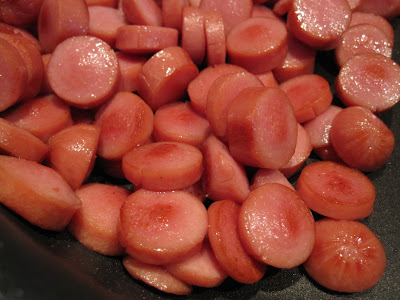 plated with creme fraiche. i had smetana in my hand at the store but for some strange reason i bothered to see how much fat there is in it... needless to say, and eventhough creme fraiche isn't exactly diet food either, i took the lesser of two evils 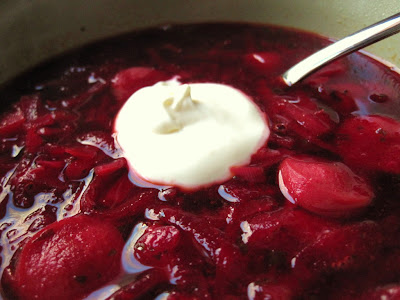 as with any soup, rye and crisp breads are a natural 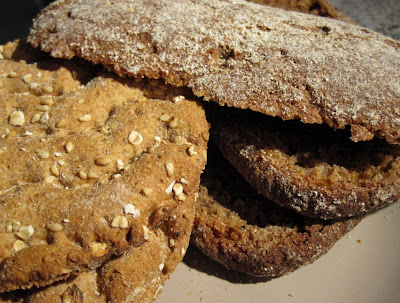 the outside temperature is at -20C... not the coldest in finland at the moment but thank god for the fireplace at the shack!
Lähettänyt liisamarja klo 6:06 PM No comments:

when i don't have time for anything else, i make this pasta dish. it's 20 mins from start to eating, no kidding, and faster if you use pasta that cooks quick. well, sometimes i make it just because i think it tastes really good...

my shop across the street at the apartment is nowadays open from 7am to 11pm (which in itself is quite convinient, yet very dangerous as to fighting cravings at 10.30pm) i'll be able to get these ingredients whenever.

i started by bringing water to a boil for the pasta. i have used up all white pasta in the pantry, so it's whole wheat from now on (you can never get too much fiber). white pasta would look nicer with salmon, so if you made this for the looks, feel free to use white, it's equally tasty. i used whole wheat fusilli, cooking time for that is 10 mins. 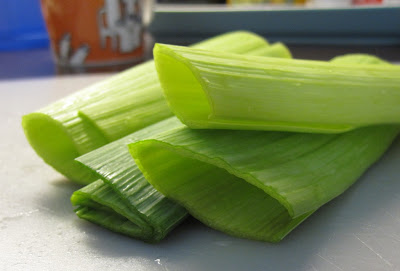 slice it fine, like here. on occasion i've used button mushrooms instead of leeks, works equally well (if not better when sauteed in butter). i'm still looking for a perfect knife, this victorinox is quite good and not that expensive, but time will tell if it'll become my absolute favourite 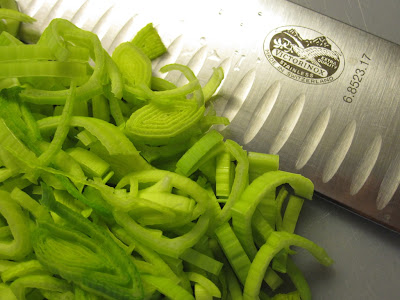 once the water is boiling, add pasta. i always cook plenty, if there is some left over, you get a base for a quick salad. heat up a skillet on medium heat to wilt the leeks in 1 tbsp of oil, for approx 2 mins. i used rape seed oil, if you have non-stick pan, no fat is needed, just add few tbsps of water to steam the leeks.

i buy the salmon sliced in 150 gr package, it's easy to roughly chop to smaller pieces 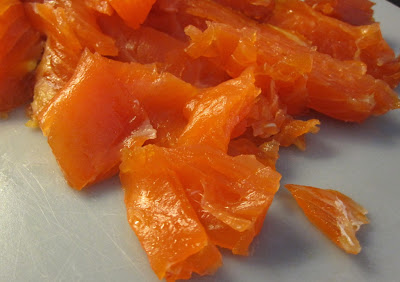 i could not resist, a dip in soya sauce, it is so goooood! 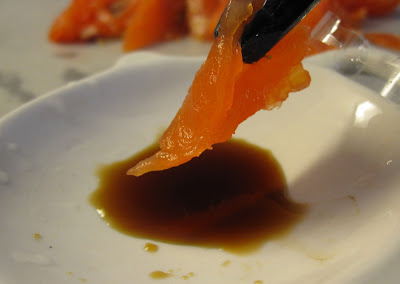 once the leeks are wilted, pour in 2 dl of cooking cream. i used 4%, but go as fat, or lean, as you like. bring the cream to a boil, turn off the heat, add the salmon, season with black pepper (lots of black pepper!), mix well and leave on the warm stove until pasta is done. this salmon could be eaten "raw" but if eating raw fish is repugnant to you, do leave the stove on and cook the sauce a bit longer 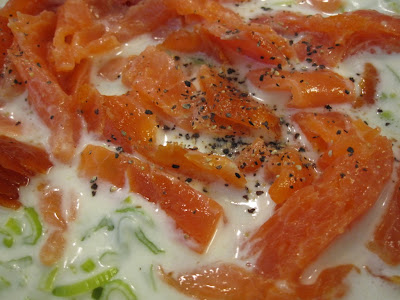 again, no salt added. there is some in the salmon, and i did splash some soya sauce on top. if the sauce looks too thick for your taste, thin it out with some water. serve either plated or from a big bowl, bon appetit! 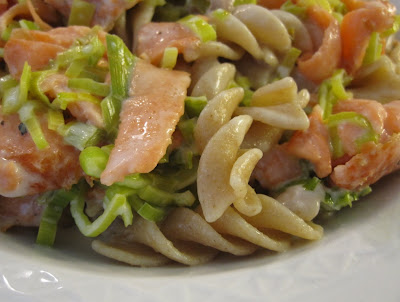 mush? yes, eventhough i liked the taste, this wasn't perhaps one of the prettiest dishes ever made, but taste comes first, right?

it all started already last week, you remember, not enough eggs to bake, etc? well, eggs were not the only thing that i'd forgotten. anyways, i decided that there just has to be something in the pantry and/or freezer that will make up a lunch and some left over to take to work.

first i raided the pantry, got plenty of rice (all kinds...), i chose quick cooking brown rice. then checked the fridge and found these 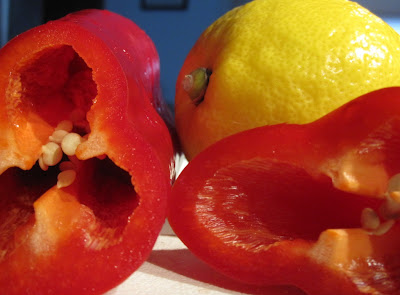 then the freezer, plenty to work with there! like these shimps 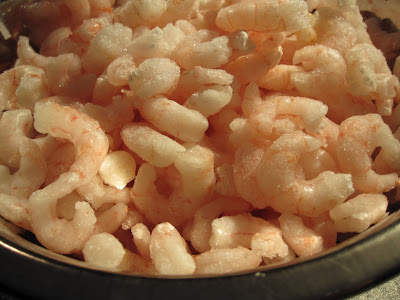 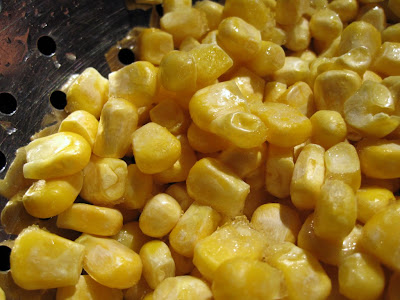 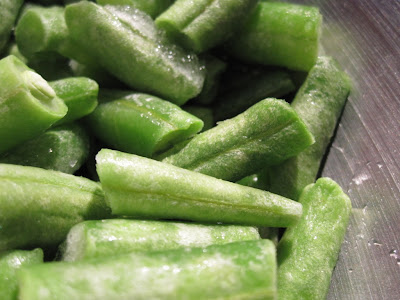 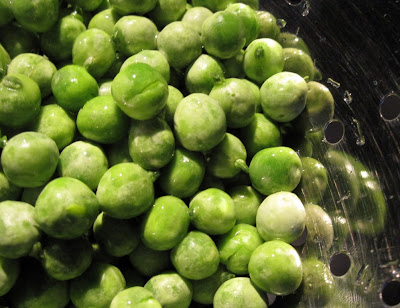 a merry mix in colander, thawing away 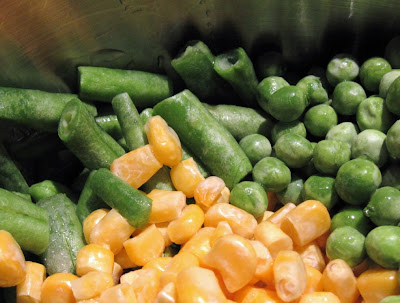 now, will this become a recipe, i doubt it, but here's what happened: i cooked the rice (plenty of it), sauteed 1 minced onion, added the thawed corn, beans and peas, chopped spanish pepper and grated peel of 1 lemon, mixed all this well. then added some chilli oil, ginger paste and pad thai sause (can't give amounts, 'cause i used what was left in the jars and bottle), perhaps i should say "add to taste" 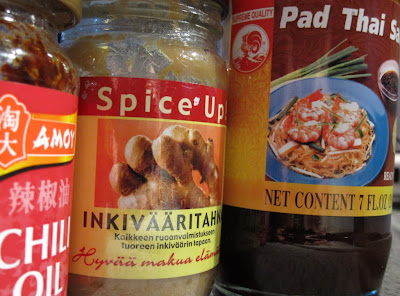 had the thawed shimp in a bowl into which i added juice of 2 lemons ('cause i like lemon...) and 2 tsp of chilli powder, mixed well and poured onto the pan with other ingredients. it looked like this, there was plenty of it, like for 10 people.

tastes equally good cold (had some for lunch today). certain someone seemed to enjoy his share, said it was tasty and easy to eat (go figure what that means!) feel free to leave the shrimp out and go all vegetarian 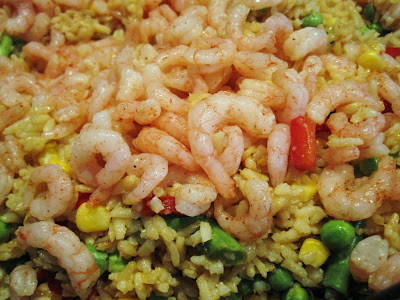 the air indoors is very dry because of this frosty weather. i do hang my laundry indoors to dry, but that isn't enough to humidify the air in my apt. i tried to figure out how to fix the problem and remembered that way back when we used have a humidifier that was hanging on a radiator. this made me think hard, very hard...

then i saw this alvar aalto vase sitting and collecting dust... and came up with a solution. i poured some water in the vase and placed it on my warm raditor... i now have a design humidifier 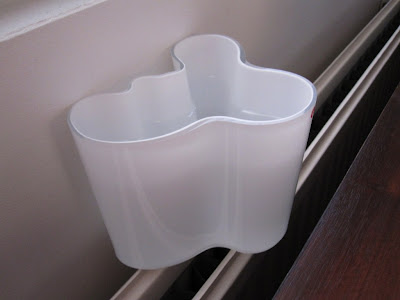 luckily the radiator is wide enough for the vase to lay on properly and balanced (and that there is kinda "flat" side to the vase to lean on the wall). perhaps not quite how mr aalto intended his vase to be used but on the other hand, i now have a use for the vase (other than collecting dust, i mean) 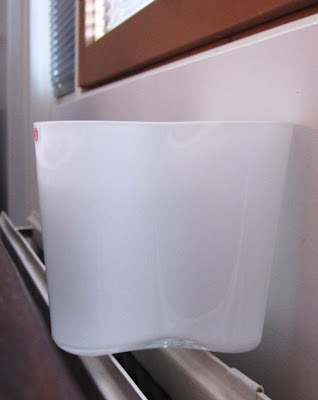