beestings, among other things

beestings doesn't have anything to do with bees nor stings, other names for the stuff are colostrum and first milk. nope, you're not alone, had to look it up in the dictionary myself, finnish name for it is ternimaito.

we used to have a summer rental way, way back in time near a farm that had lots of cows (and a crazy horse). on occasion, we would get a jug of first milk and mom would bake it the oven. few months ago i went to get something from the market hall and there, in a cheese shop, they advertised frozen first milk. i bought one liter and took it with me to the cottage at midsummer.

you can get first milk only from a cow that has recently had a calf. so basically, you're robbing the calf of its milk...i think i can live with this knowledge, it's not like i have this very often. so, if you manage to get some first milk (now would be a good time to get friendly with a cow, or a person who owns one, or more...) take an oven dish that holds your milk in 4 to 5 cm layer, add some salt to the milk, mix well (be sure to mix it well, the fat (did i say lots of it?) will gather on top) and pour it into the oven dish and place into a 180C oven until firm and slightly golden on top 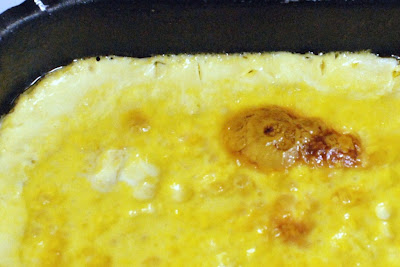 the milk solidifies in the oven, into kinda cheesy consistency, it should be sort of wobbly 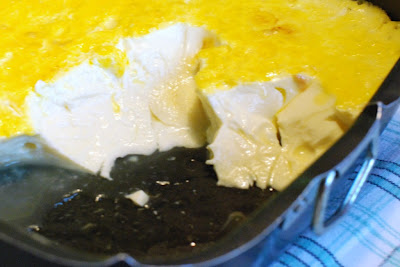 let cool slightly and scoop onto a bowl. i had mine with cinnamon and sugar and ate it too fast to take picture...we did a lot of reminiscing while eating this. i had a distinct recollection that would have had milk in as well, but my mom said that i didn't, she said cinnamon and sugar is the way to go 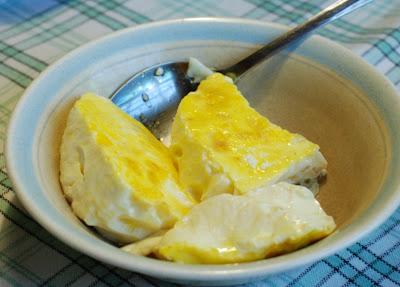 my nephew and little niece came to the cottage for a few days after midsummer. nephew always asks for pancakes, that would be the american pancakes made with buttermilk. usually i don't bother getting buttermilk but use sour cream and milk instead. these i made with buttermilk...and guess what? buttermilk is the way to go, the pancakes are a lot fluffier and do taste better. and as my dad considers buttermilk as "spoiled milk" he won't eat any... 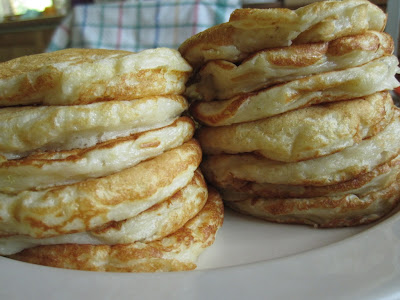 monday lunch, chicken (or might have been turkey) cutlets in coconut-peanut butter sauce. super-easy to make, just brown required amount of cutlets 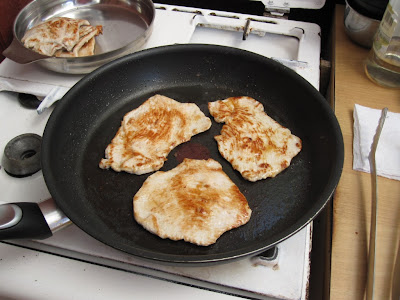 for the amount cutlets we were having, i mixed one heaping tsp of smooth peanut butter into 2,5 dl coconut milk, added a dash of chili powder (not too much, mom and little niece don't like it too spicy). had i made this to suit just my taste, i would have added some garlic as well 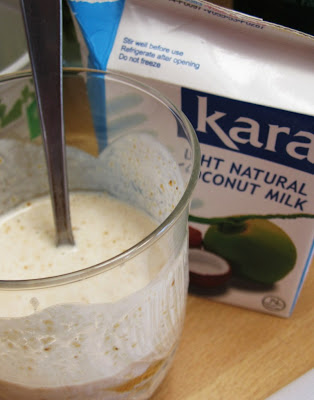 after browning the cutlets in batches, place all back into the pan and pour the coconut milk - peanut butter mix in and let simmer on low for a few minutes to make sure the cutlets are cooked thru. we ate this with white rice, but whole wheat noodles would be good, too, with some steamed broccoli 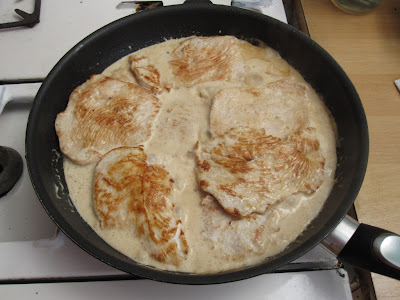 dad had caught some more fish that he smoked. we ate some of it "au naturel" but there was so much of it that i had to get creative. there was some leftover rice, and celery (4 stalks, sliced thinly), 5 cm of leek (white part, minced), flat-leaf parsley (two heaping tbsp, minced finely), one quarter of a small cabbage (shredded finely), peel (grated) and juice of half a lemon 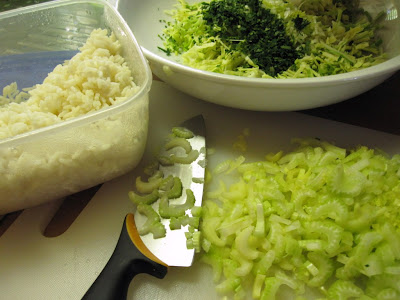 mix all of the ingredients and add the smoked fish on top. there was some salad leftover (sans the fish), quite enjoyed it on its own with just a tad of ranch dressing 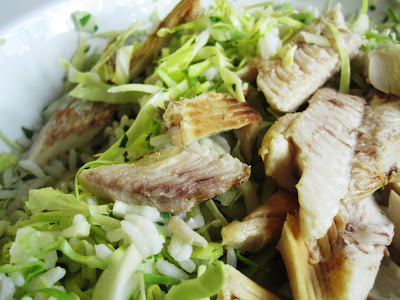 remember the crazy horse i mentioned in the beginning? well, it seems i've kept having this trauma over forty years all for nothing... first of all, we were renting this place when i wasn't even in school. talking about the the milk and the cows and the farm i suddenly remembered that their horse used to pasture with the cows.

i remember once occasion when i had to "run for cover" into the outhouse and safety as this huge black beast was running after me. naturally, i was scared that the horse would eat me, or something. i don't know how long i was hiding in the outhouse before the horse left but every time we went to the cottage after that, i wanted to make sure that the horse was either in the stable or otherwise "tied".

after telling this my dad says that the horse was the kindest, gentlest and most people-friendly horse he has ever met. dad, this information would have been very usefull about 40 yrs ago! i'm not sure if it really happened, or if it's just a part of a nightmare i kept having, but i have the recollection that the horse kicked the door of the outhouse while i was inside. what a trauma! hmm, could this explain some of my fobias...
Lähettänyt liisamarja klo 9:06 PM No comments:

i think midsummer might be a bigger deal than xmas in finland, judging by the amount of food (and drinks, let's not forget the drinks) people buy for the weekend. i'm all for good food (and lots of it) but some people were getting heaps and heaps...i cooked a lot, as well, but for nine people

we drove to the cottage with two vehicles as i’m staying here a bit longer. had my blogging set-up going on thursday evening but got distracted by my surroundings… the internet connection has been super-slow over here, that’s why i’m packing the pictures a bit tighter and that affects the sharpness, sorry about that. 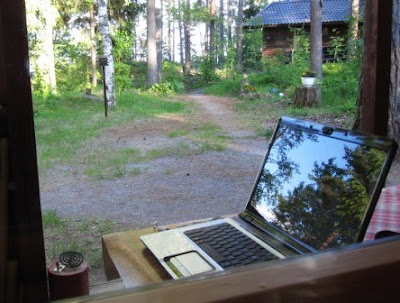 certain someone rode his new (toy) harley here. we left the dog home with a sitter, too much hassle going on here this weekend 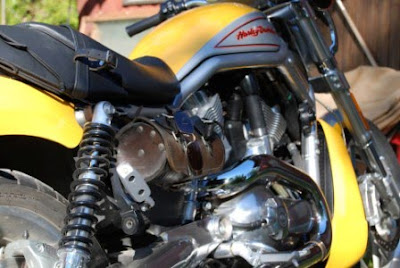 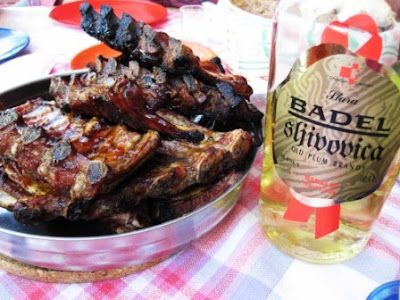 my drink had limes in it, and sugar, and mint and just a tiny splash of something strong. i only had one, honest! 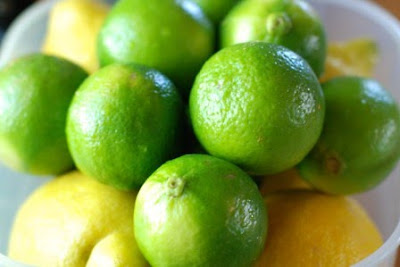 we have made bandit roast (pit roast) twice earlier but i thought that we could try something different this year with a “peka”. i suppose all croatians will throw a fit now, but let me finish first. this cast iron cauldron played the part of peka, in croatia they would cook the food in the pot but as you can see, this one is a bit weathered… 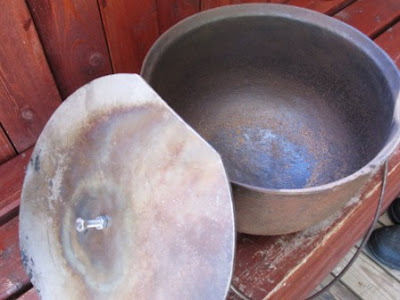 …so we wrapped the meats first in parchment paper, then 3x in foil and last with wet newspaper, quite similar like we’ve done pit roast earlier. mom had dug out a 2kg moose roast from the freezer, we marinated that in red wine over-night, seasoned with salt and black pepper, wrapped in bacon before the packaging. the other package was a pork loin that got just a bit of salt. on top i placed very wet newspapers, before putting the lid on 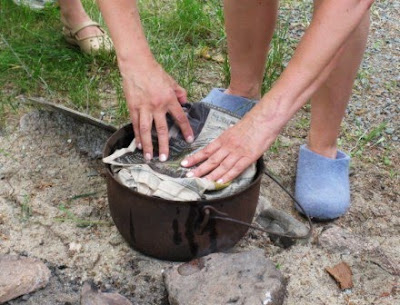 we had burned a fire in the pit for a few hours before placing the pot in in. there it is, under that fire. at this point we started to wait… 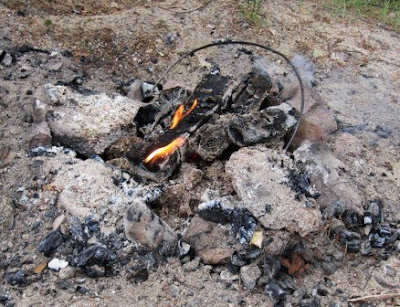 …and while we were waiting i grilled some chicken for a “light” lunch, seasoned with just salt and pepper. it pays to get the chicken fresh and organic, even the kids noticed the difference in taste 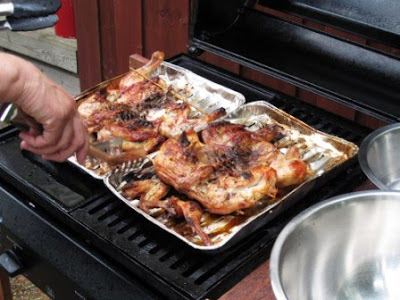 the chicken was accompanied with a very simple green salad with tomatoes, cucumber and cantaloupe, and mom’s bread 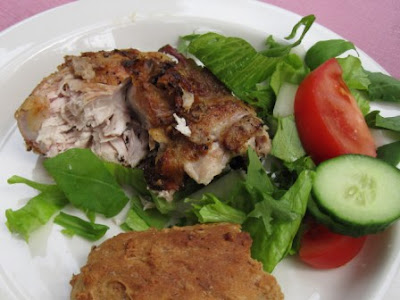 we had figured that the roasts would take a few hours, so after lunch we took turns in bathing in the sauna. i’ve often wanted to take pictures in the sauna but the heat and stema keep fogging up my camera big time. and i’m not entirely sure people would want their pictures taken whilst bathing. come to think of it, i don’t think i would! 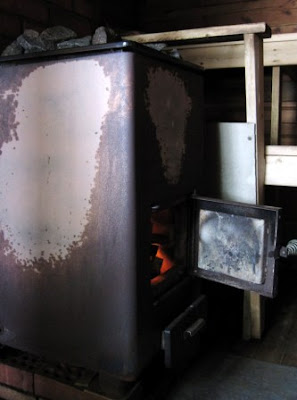 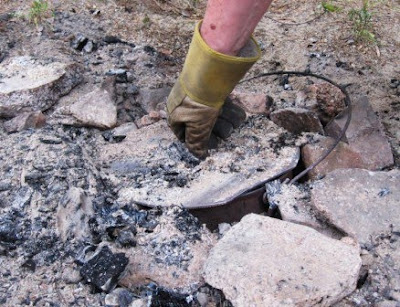 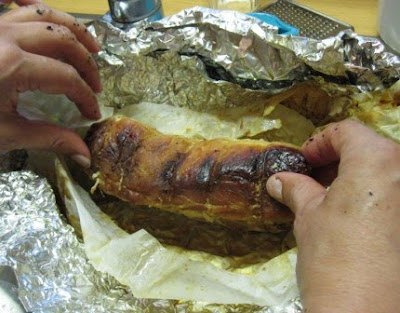 …and was, very done, very good 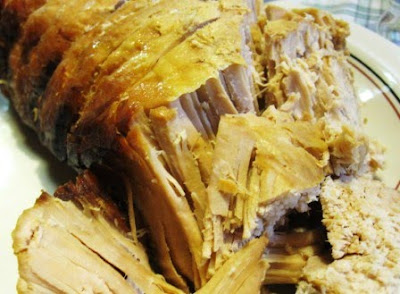 the moose then, it was superb when still slightly warm, but even better cold on the next day 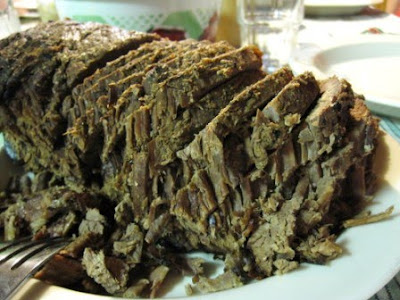 i got the inspiration for this salad at rehab. they served several nice salads but this really got my attention, i could taste celeriac and apple in it but couldn’t quite figure out the other ingredients. when i told my mom about it, she immediately said waldorf’s (well, she did work in a hospital kitchen for a few decades…)

my waldorf had 200gr finely grated celeriac, 4 stalks of celery thinly sliced, 200gr tin of pineapple chunks (will get crushed next time), drained and juice reserved for later, 2 peeled and grated granny smith apples. made the dressing with 2 heaping tbsps of mayo, “some” whipped cream (mom was making a cake and there was some left over and could be I went a bit over-board…) and some of the pineapple juice.

if you’re eating the salad right away the dressing can be a bit runny but if the salad needs to sit in the fridge you’d want the dressing to be on the stiff side. the pineapple and apple will give out juices and you’ll end up with a very wet salad, tasty, but wet. naturally, i forgot to buy wallnuts for the salad but had pumpkin seeds, which worked great perhaps even better... 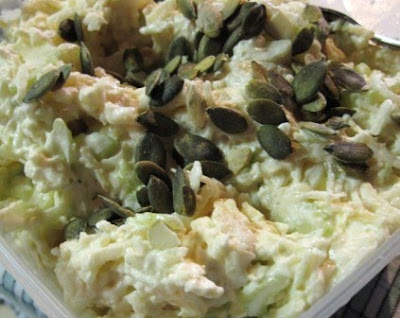 a very bad picture of a very nice guacamole (mushed avocados, finely diced and de-seeded tomatoes, parsley, cilantro, chili powder, salt). in the background two sour cream dressings (both with vinegar, salt, sugar, white pepper, the other had minced dill, the other garlic and parsley) 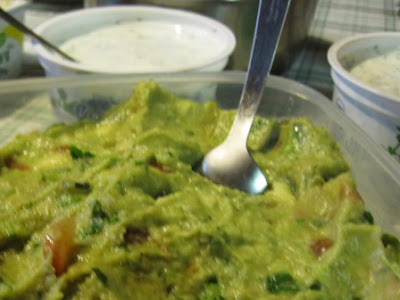 lake trout that my dad caught and smoked 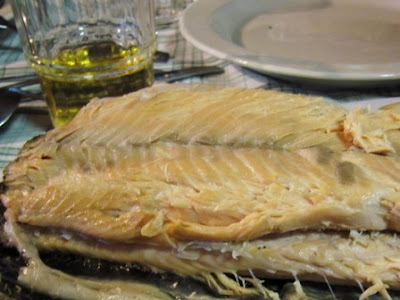 midsummer usually falls on the name-day of almost all the males in the family, therefore a cake. another bad picture but the cake was good! 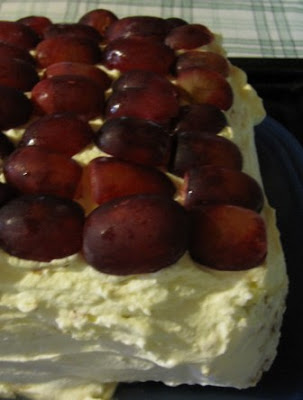 the weather then...it seems that the bonfire versus people wanting to spend time outdoors collide...we had been dreading and waiting for it to rain, because we did want to get the fire going, no rain, no fire. with enough rain it would have been safe to set the fire but not comfortable to go out and watch it burn. around 7 pm on midsummer eve we got the rain, and boy did we get rain, over 40 millimeters over 3 hrs. my dad had to play a trick or two to get the fire going in the rain. 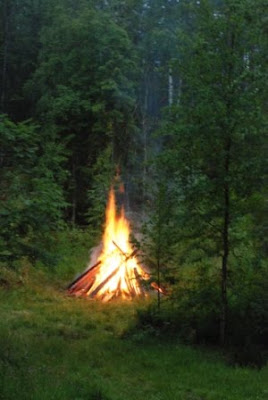