until yesterday i was a soufflé-virgin... 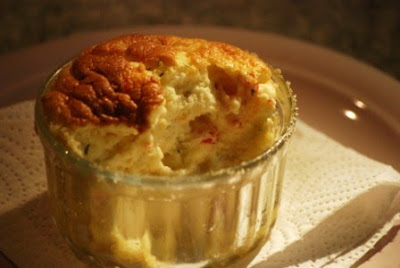 some time ago i noticed the existence of delicious magazine and with not much thinking i subscribed it...there's been many interesting recipes and in january issue i found a recipe for crab and gruyère soufflés. also, certain someone and i happened to be shopping earlier this week and i came about soufflés dishes that were on sale...clearly karma telling me the time for soufflé had arrived.

you'll only be seeing pictures of the dishes in various stages, i was nervous (and had something else cooking at the same time, not a good idea...). i made half the recipe since there were just the two of us. dishes buttered and breadcrumbed, ready for more 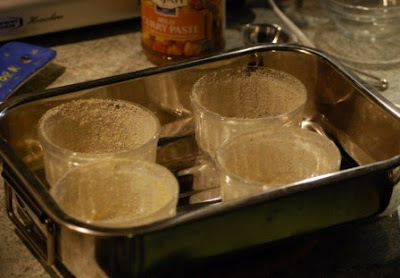 the recipe says to use 1½ dl soufflé dishes, i did, but with half the recipe i got 4 and the was plenty left in the bowl for the dog to lick. recipe should make 6 portions. i left the red chilli out, was too busy mixing and whipping to conduct a search in the fridge, and used different kind of crab meat. 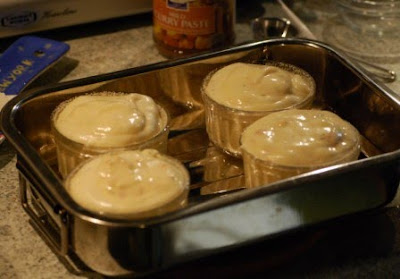 as the soufflés started to rise and brown on top, and certain someone not yet home from work, i was starting to get really nervous... certain someone appeared in the nick of time to help me get these out of the oven. 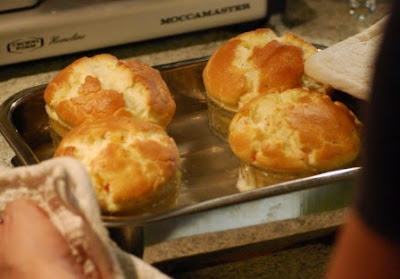 i was dreading for the moment the soufflés would collapse, it did not come!

the taste was amazing, like really delicious fluff with bites of crab meat. 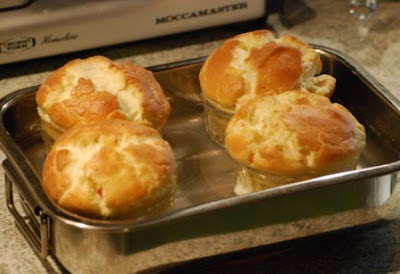 certain someone was asking whether this was fancy food and would we ever go to a restaurant to eat this...nope, we won't, but why would one, this really isn't that difficult to make. i'm thinking soufflé has a bad reputation as being "challenging" because fancy chefs don't want people trying this at home! besides, so what if it collapses...it's still eatable. 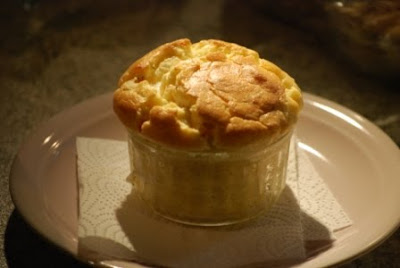 ps. went to the doctor's yesterday, namely three (!) surgeons. these guys seemed to think that prosthesis isn't what i need, not sure if that is good or bad news. it's now decided that they will scrape some more bone off and place wonder-material (i forgot the name of it) which will grow matter on and in itself to perform as buffer between my ulna and radius (i hope i got it right...). if this doesn't work there are still more options to try and fix my wrist. their thinking was that if they do the prosthesis now, it's pretty much it, all other options after that wouldn't be improving the situation, just barely maintaining what is left.

oh, and the schedule? there is no wonder-material to be had in the whole wide world, they don't know when there will be any, they need to call the factory. the surgery would take place, if extremely lucky in getting some material, late spring, but more likely in early august!!! i'm so not a happy camper!!!!!!! i did tell them that i will go bananas if i have to wait until august...
Lähettänyt liisamarja klo 10:07 AM 2 comments:

i was browsing the new york times website (hello, my name is liisamarja, i'm nyc-holic) and found a video for cardamom-scented oatmeal pancakes with apricots and almonds. i had been blissfully unaware of the minimalist, mark bittman, until i saw him on tv, the show where he travelled spain with gwyneth paltrow and mario batali, spain - on the road again. somehow, spain hasn't been on my list of countries to visit, but the food on that show made me wanna go...

hmm...where was i...right, the pancakes. the recipe looked easy (always a plus) and quick, and there was no baking soda in it (baking soda doesn't agree with my stomach) (there seems to be way too much information this morning!) 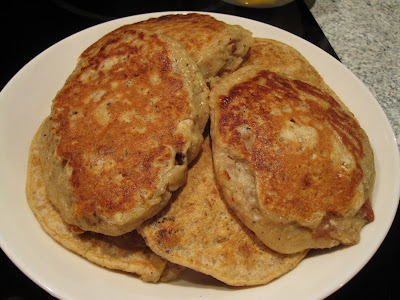 i started last night, cooked the oatmeal, and took out the dry ingredients... 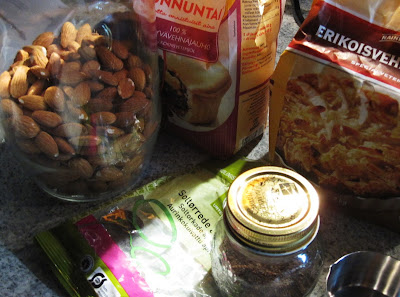 ...chopped the almonds and apricots (look for ones that have no sulfides in them)... 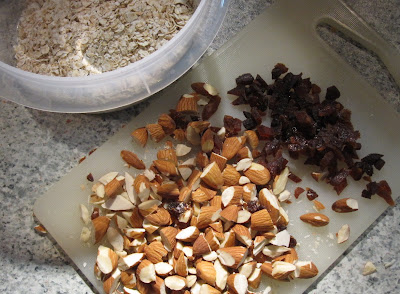 ...measured the dry ingredients into a plastic bowl... 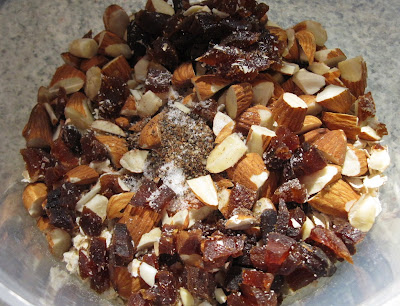 ...to have everything ready in the morning. 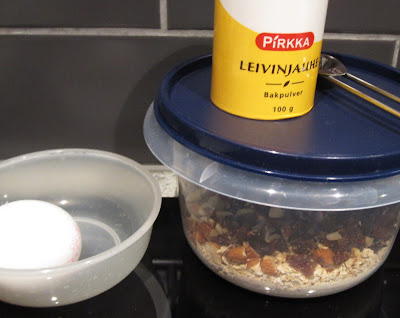 i made the oatmeal out of quick cooking oats, texture is a lot smoother that with regular oats. 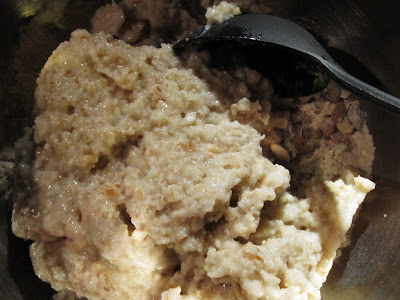 the wet go in, the batter was rather thick 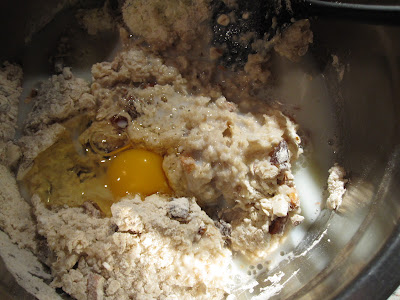 in the video bittman seems to use a lot more oil for frying these, i used approx 1 tbsp of oivariini for the whole batch, but i can imagine how much better a little more fat would make these... 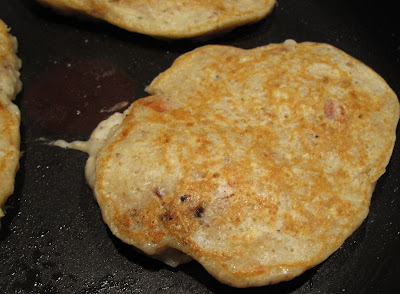 i got 12 pancakes out of the batter. i have, finally, learned how to adjust the stove at the shack in order to have the pan just right for pancakes. too low and they dry out and don't brown at all, too hot and they get too dark and not cooked the middle...

bittman says to eat these with honey, or nothing at all. certain someone had his "au naturel" as did i for the first one... 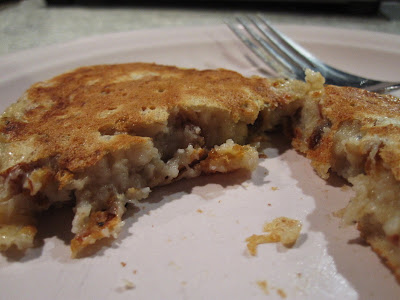 ...but as i'm still struggling with maple syrup addiction, had to have just a little with the second one... 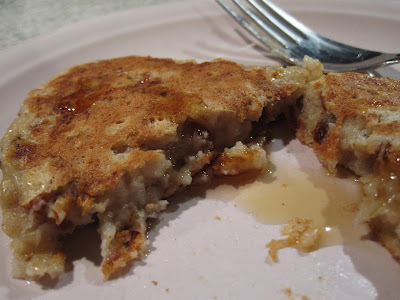 Lähettänyt liisamarja klo 9:18 AM No comments:

around new year's certain someone and i had dinner at my uncles's, his wife is an amazing cook. we had steaks with sauteed mushrooms and crepe suzettes for dessert. the steaks were cognac-coffee marinaded, the suzettes were flambeed...

this weekend i drove to my brother's for a visit, and ended up cooking for the whole crew. as i was going thru lunch options i remembered the steaks we'd had at my uncles. i decided to serve them with roasted fingerling potatoes and brussels sprouts. the little niece got her steak "au naturel", others marinated. the recipe in the link in in finnish, couldn't find one close enough in english. marinating steaks for four you'll need:

2 dl bbq sauce (any ready made, or your own)
½ dl cognac / brandy
½ dl strong coffee 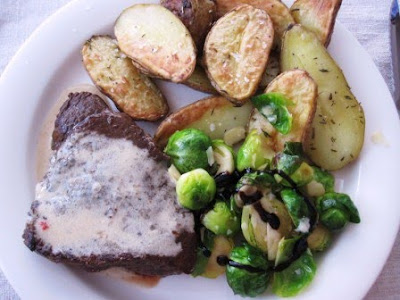 as luck would have it, once in a blue moon, when i cook in a kitchen where there's natural light for great pictures, i forget my "good" camera home, and the battery in the small one was running down...so, instead of giving you the whole PW tutorial, you'll get one lousy picture of everything on the plate.

the fingerlings went to oven with rapeseed oil, dried thyme and rosmary. the sprouts (which, by now, i'm starting to really like...) got my usual treatment, medium hot pan, no fat until slightly caramelized, slivered almonds for garnish.

for the sauce for the steak i used 200 gr cream cheese with black pepper (lots of it), 2dl water and ½ dl cognac. first cook the cheese & water un medium heat until smooth, then add cognac (and pepper if your cheese doesn't come flavoured) and some of the marinade to taste. i did add some sugar to round up the taste. i'm no sauce/gravy master, but this turned out so good, ask my brother, he dunked his bread in it...

i'm not going to tell you how to cook your steaks, some much depends on some many different things. this was first time cooking steaks at my brother's so i was more or less playing hazards...i was aiming for medium, we got medium plus, which i consider not so bad.

well, great lunch calls for dessert, right? my nephew asked for "english" apple pie. after asking him to define "english" here, he said "a pie with a lid". i went to martha for a recipe for pate brisee for the filling we peeled and chopped 5 granny smiths, added some sugar, cinnamon, all purpose flour and butter, filled the pie and put the "lid" on. i did make fancy holes on the top... 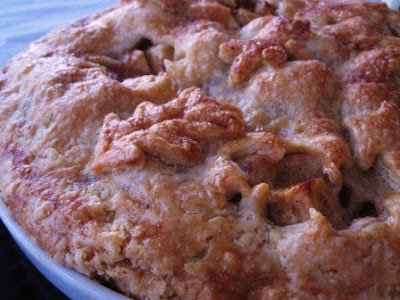 with apple pie you gotta have something vanilla...i was going to make vanilla custard from scratch but got lazy and ended up with store bought custard 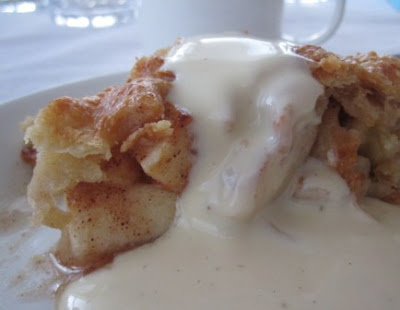 the pie was gone in no time...i think my best apple pie ever, seriously. i'm blaming the amount of butter in it... 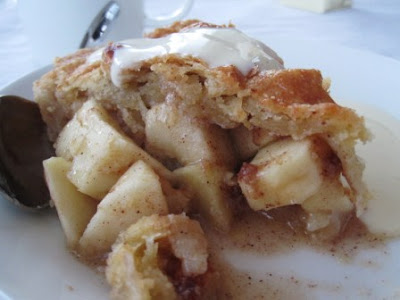 my sister in law suffers from the same disorder i do...or maybe it's because we're both virgoes...here is her "holiday destination brochure project" (she's going to be so mad at me for posting this picture...) 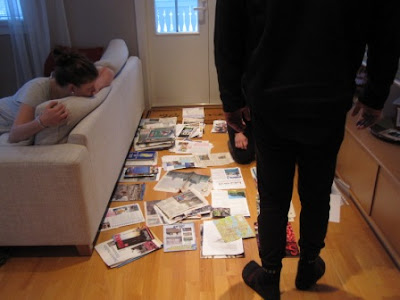 ps. another take on the steaks here.
Lähettänyt liisamarja klo 9:24 AM 5 comments: