as it is shrovetide pea soup is appropriate. this was my first time ever making it from scratch, turned out to be very easy. just not for a quick cook


i more or less tripled the recipe and got, well, enough for a while, and some for freezing

start by rinsing the peas, then soak them overnight in water. i did this in the same big kettle that i used for cooking the soup. here are the soaked peas before adding anything else in the pot 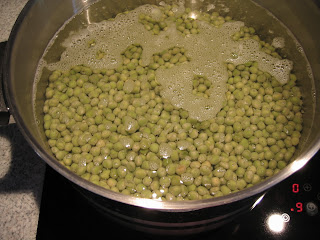 did not have shank but some smoked ham. there are some nasty bits like skin and some of the fat, but hey, that's where the flavour is! there was some bone as well and some nice pieces of actual meat, which was cooked in one piece, later cut up to bite size pieces. i did take out all the nasty stuff at the end 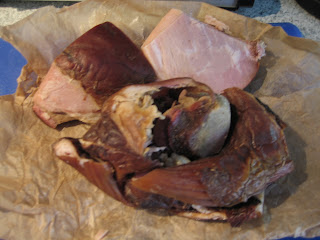 let the peas come to a boil before adding everything else, except the marjoram. simmer for 1½ to 2 hrs, stirring occasionally. add marjoram after the first 45 mins 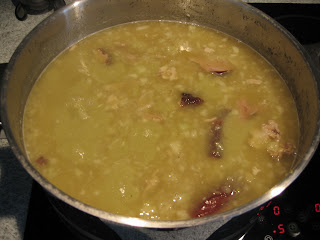 fish out the meat and bones, cut up the meat to smaller pieces and put back to the pot. taste for salt, pork in itself is salty so you might not need to add any. it seems i always eat my soups with rye bread and cheese, crisp bread is more traditional with pea soup (ask any man who has been in the finnish army...) 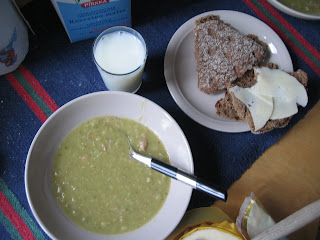 if you're not into meat, try a veggie version with carrots or potatoes (cut up to 1 cm cubes / 1/3 inch) or leek. if you have vegetable stock, use that for half of the required liquid, or add a couple of maggi (or any other brand) cubes

there was even one recipe that suggested adding ginger, was not brave enough to try it. mustard is another traditional condiment to add to pea soup, personally, i like mine without
Lähettänyt liisamarja klo 11:20 AM No comments: