february 5th is runeberg's day in finland, the day is mostly known for runeberg's tarts, not forgetting runeberg's literary accomplishments, though.

knowing that i would be away on the day, and the fact that certain someone loves these tarts, i made some ahead. certain someone also loves all things almondy, so i decided to try something with this recipe. the link is in finnish, my revised recipe follows. i wanted to use this particular recipe for the fact that there is no butter in it, the finnish version is called "lightened" tarts. 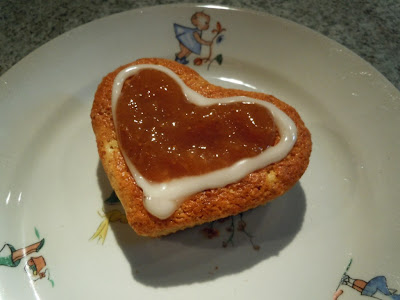 i've told the story on these tarts on previous posts, so if you're interested just type runeberg's tart on my search and you'll get the old posts.

first of all, this shape is far from traditional, but since these silicone molds haven't been used (i think) i thought i'd give them a try. plus, they are kinda cute, and valentine's day is approaching, and what not...

i found these amaretti cookies in the pantry. i had bought them in order to make a tart that i got a recipe for from claudia at our hotel in malcesine. naturally, i lost the recipe, so no amaretti tart. my train of thought was that since there are almond flour and almond extract in most runeberg's tart recipes, these cookies might do the trick and other cookie crumbs could be replaced with these.

my adapted recipe (in metric measures): 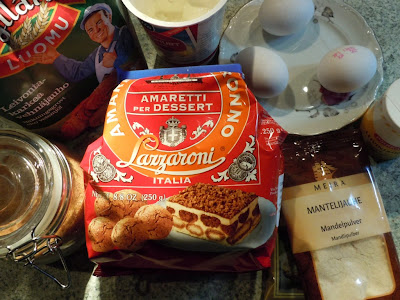 to start mix all the dry ingredients together and the vanilla with yogurt. then whisk the eggs and sugar until fluffy and the mixture holds a pattern on surface. fold in the dry ingredients alternating with the yogurt. bake in 200C oven for approx 15 mins on the mid-level. let cool, keeps in room temperature for 2-3 days, freezes well up to 3 months. 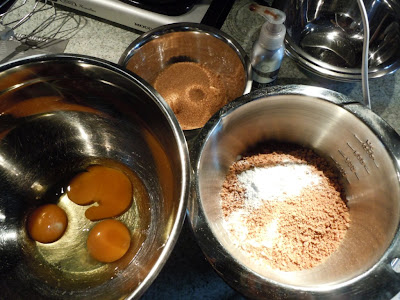 although i think silicone molds don't need to be buttered, i buttered these slightly, just to make sure i'd get the tarts off in one piece. 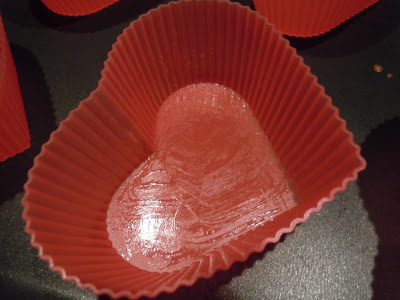 the almond aroma from the oven was quite strong, in a nice way. i have no strong feelings for runeberg's tarts and before certain someone came into the picture i really didn't bake them or eat them. things you do... 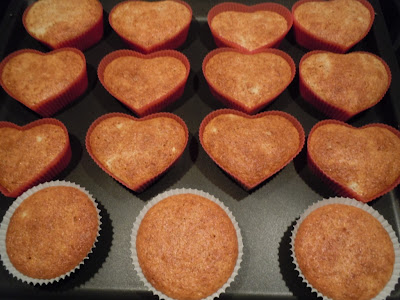 this batch made 12 hearts and 3 round one (paper forms). surprisingly, i kinda liked these, plain, no decoration. i did the one just to show they'd look if one bothered. there's been a thing or two on my mind lately so i forgot to get some raspberry jam for decorating That's strawberry on the first pic). on the other hand, most of these were going to the freezer anyway, so the jam would gone yacky anyway. 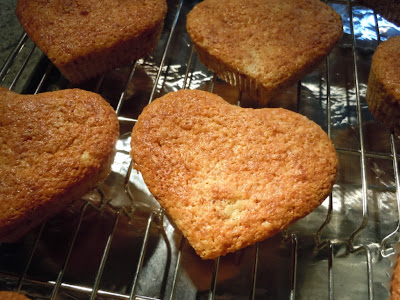 this is the more traditional form of the tart. 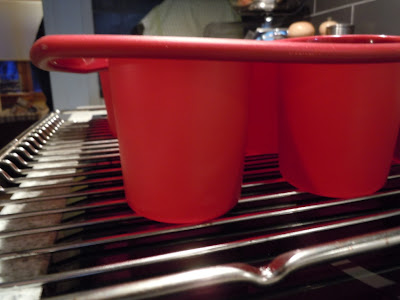 made some old-fashioned as well, they are tasty, but quite boring compared with the amaretti version, definitely in need of something on top. 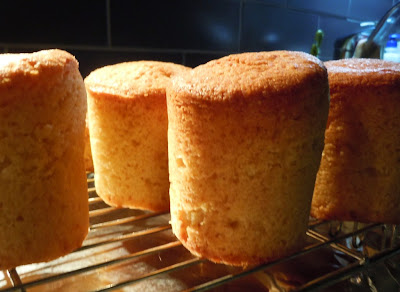 as i'm writing this i'm anxious as i take off tomorrow to somewhere i've never been to before. if i get a chance to post while i'm away, i'll let you in on where i am. if not...see you in about a week or so!


Lähettänyt liisamarja klo 10:00 AM No comments:

Email ThisBlogThis!Share to TwitterShare to FacebookShare to Pinterest
Tunnisteet: baking / other, dessert

as you're reading this i'm on a trip that's been in making for a decade, more on that once i get back home, it's soup time. i went and bough about 2 kgs of veggies with the intention to make soups for certain someone to eat while i'm away. he's been sort of learning to cook, and he promised to take pics of what he cooks while i'm gone...that should be interesting.

biggest part was to peel of of these, with wrist support, but then it really was just chopping and simmering... 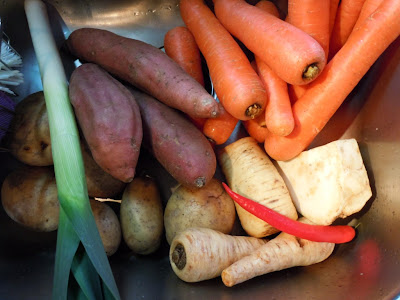 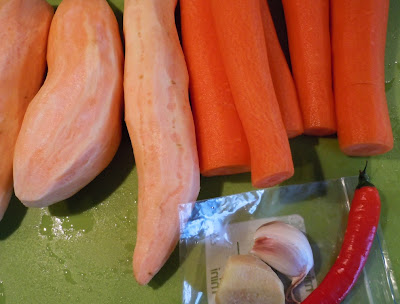 start by sauteeing the ginger, garlic and chili in oil on high heat, add carrots and sweet potatoes, keep sauteeing for a few minutes... 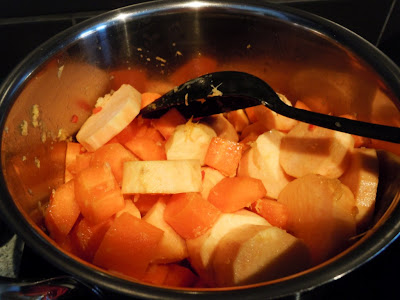 ...before adding boiling vegetable stock (or 2 tsp stock powder & water like i did) to barely cover the veggies, about 2 to 3 cups. 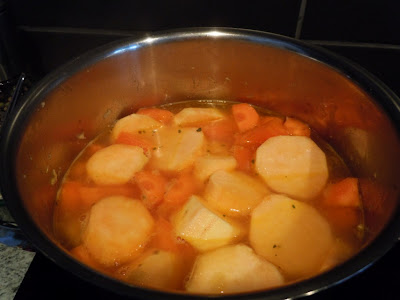 once the veggies are tender, after 15 mins or so, add the coconut milk and an immersion blender to puree the soup. 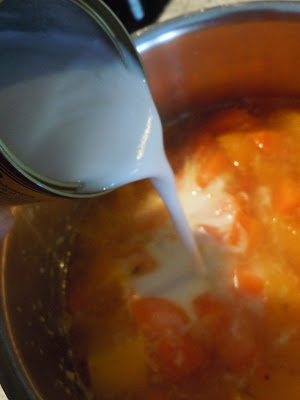 had one portion with turkish yogurt and green onions on top, 1 portion for lunch and 2 more for freezing. 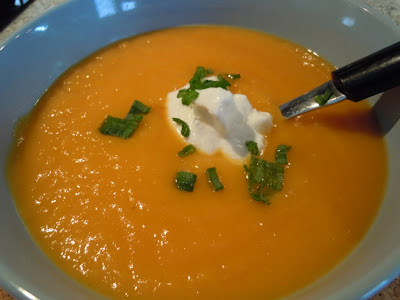 rest of the veggies went into a big pot, parsnips, carrots and celeriac diced into 1cm cubes, potatoes diced into a bit bigger cubes, the leek minced. sautee all veggies except potatoes and dark green parts of leek first on high for 2 mins, then add boiling vegetable stock to barely cover the veggies, let simmer for 10 mins before adding the potatoes (and some more stock) and simmering for another 10 mins, or until all veggies are done.

the latter soup went to freezer, after thawing certain someone can add sausage, ground beef, or nothing before warming the portion up. 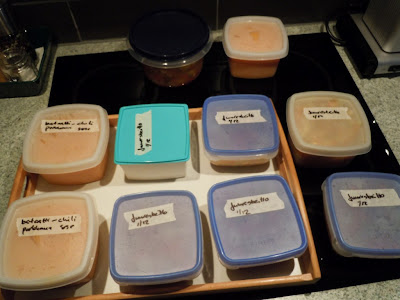 Lähettänyt liisamarja klo 11:00 AM No comments:

another take-along lunch...very easy and not too bad for you, lots of veggies, or all veggies if that is what you like. 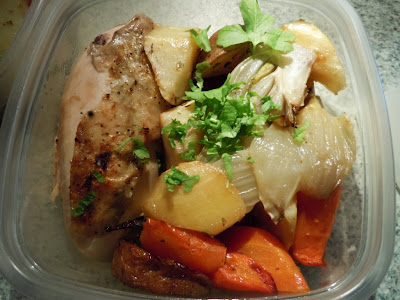 the difficult part was to grate the peel of one lemon, mix that with 1 tsp crushed black pepper and salt... 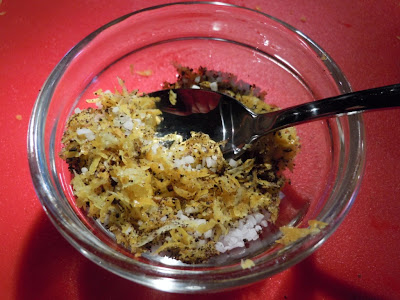 ...then rub that on the chicken, and put the chicken in one of those oven bags... 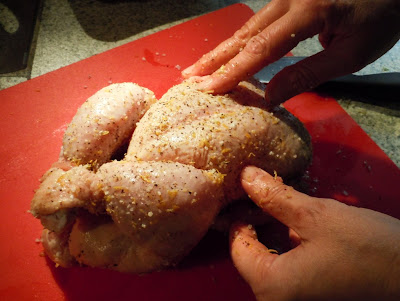 ...and place the bag next to roughly diced veggies, potatoes washed with peel on, carrots and parsnips peeled and diced, one fennel sliced into 1cm slices. 45 mins in 200C oven and you're done. 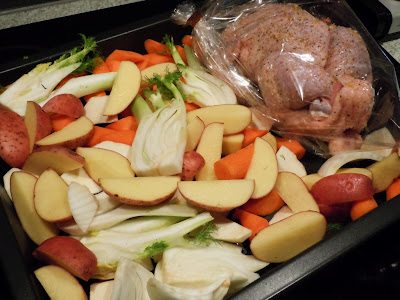 certain someone chose oregano as the herb. 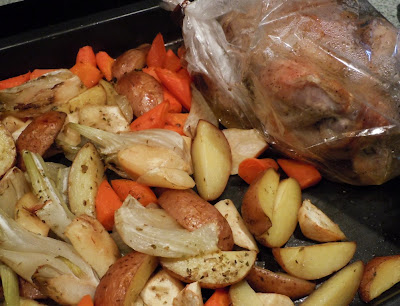 i got two lunches and some munches of this. 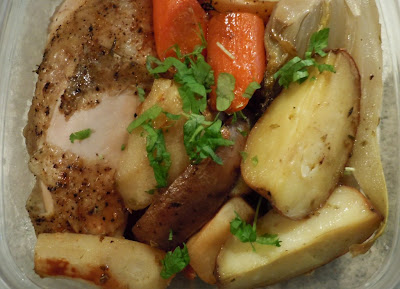 dessert was on the easy line as well, quark, 2 bananas... 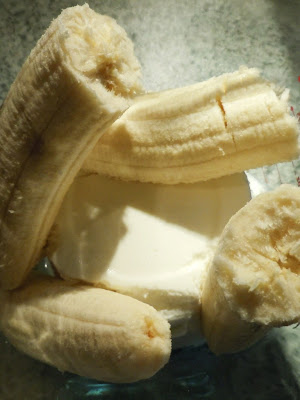 ...seeds of half a pomegranate, some milk and an immersion blender. 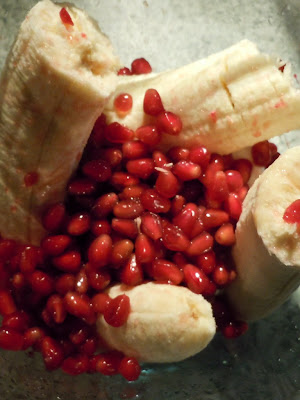 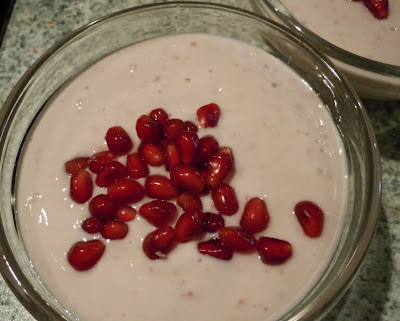