it's almost 3 weeks since i returned from my trip to india. my mind still seems to wander there, remembering details of the people, places, food and whatnot. it feels like my brain is still on overdrive processing all things indian. i have 1700plus pics to sort out...some of which i will post, eventually. i had the best hosts who took me to places i definitely wouldn't have seen if it wasn't for them. thank you so much for taking care of me!

first order of things indian, masala chai. i love it, had it first thing in the morning on most mornings. little apprehensive before the first sip but i got hooked right after it. since returning home i have tried to get the flavor right, took me several tries... 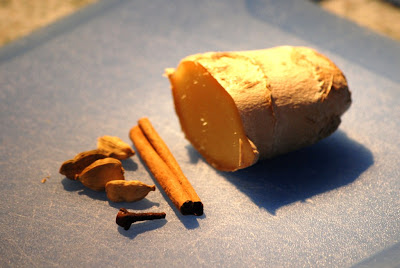 in the picture i've peeled the ginger, but it really isn't necessary. 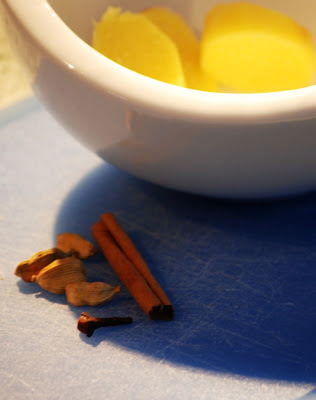 you can use any old way to crush / mush the ginger and other spices (not the sugar though). measure the water into a small kettle, add the spice mush and tea leaves and bring to a boil. once boiling add the cream and sugar, turn off the heat, leave kettle on stove for 10mins to infuse, then strain into a mug (or tall glass).

there are people who say that you really shouldn't boil tea leaves, but that was the way they did it in india (and lots of recipes on-line tell you to do the same), so who am i to argue. then again, the choice is yours, i guess you could add the tea leaves after turning the heat off... 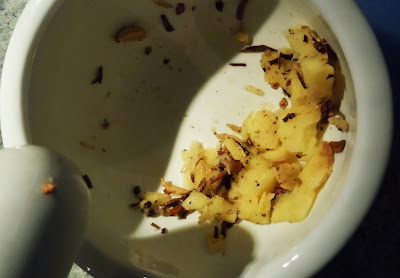 i also got into the habit of dunking toast, cookies and biscuits into the tea...i also gained 4 kg in two weeks...as much as i would love to have this every morning, i make it only as a treat, and i most certainly will not dunk cookies in it. well, not every time anyways. 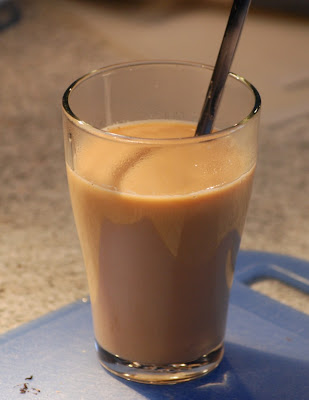 this is probably my favorite souvenir ever, i got it as a gift from my hostess. besides the fact that i had been wanting one for years, it is so pretty with the colorful spices, this one has engraving so everyone will know when and from whom i got it. thank you again! 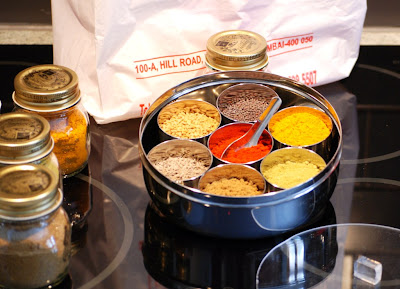 the spices came along the masala dabba, i placed them into airthigt jars once home. 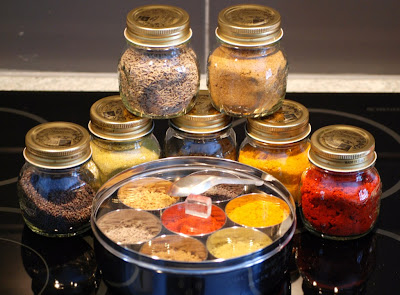 the spices are, from the top (clockwise) black mustard seeds, ground turmeric, ground coriander, ground cumin (jeera), cumin seeds, fenugreek seeds and chilli powder in the middle. i hope i got them right... 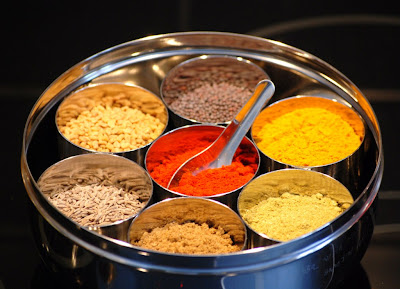 the spice package includes also kokum that i had never even heard of. i will use to make dry okra dishes, it prevents the okra from getting slimy, i'm told. 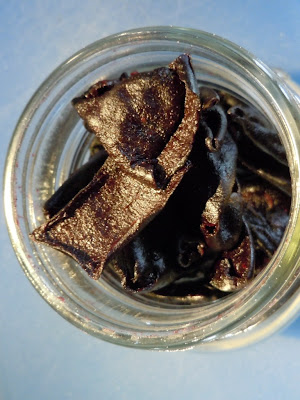 yesterday after work i felt (for the longest time) well enough to venture to the asian markets in helsinki. i was amazed what we get these days, fresh okra among other things. long way from trying to find ghee about 10 years ago, when no one even knew what it was...

in the indian market there were mixes for jalebi, gulab jamun, dosas, dozen different types of rice, huge variety those spicy indian snacks and spices and lentils. what i found interesting is that the prices were considerably lower than in our regular stores, and coconut milk was downright cheap. 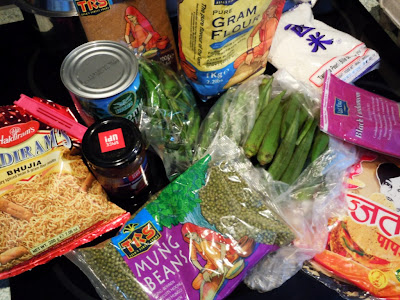 trendy as i try to be (hah!) i also got myself a pressure cooker...i'm a little nervous trying it for the first time later today, cooking indian, will post the results later on.