just took chocolate cakes out of the oven, recipe from martha stewart's baking handbook (who else!), will frost them later in the week, the certain someone has his b'day coming up. i used different size pans than in the recipe, therefore will have 2 cakes. not sure what kind of frosting i'll use, will try to remember to take pics of frosted cakes 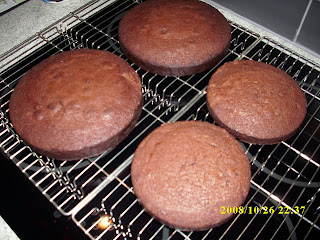 i spent yesterday making apple sauce. bought a slicing / coring tool that i'd earlier thought would be useless, but made all the difference with the apples. saw one in use on whateverradio.com blog by alexis and decided to try it. i had plans to do more apple sauce than i did, but i decided that 42 jars has to be enough. there is another fridge as full as this... 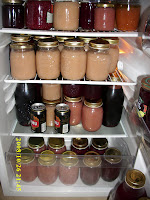 took the dog for a walk as well. i'm not particularly a dog person, but there seems to be things you do for certain someones. this particular dog puts a strain on my nervs, occasionally. the dog is organic, if the term can be used of an animal. by organic i mean the dog is not trained, kinda all natural... he was rescued as a puppy, first home being not a good one. difficult is an understatement of the first year with the dog, but it is calming down. a walk with it can be quite nice, provided there is no rabbits, deer or moose around. oh, the dog is terribly afraid of cameras, therefore the scared face 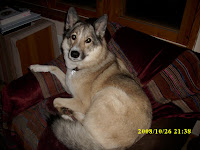 i live in the city in an apartment, the certain someone lives, with the dog, in the country in an old house we call the shack. workdays i'm at my apt, days off are spent at the shack where i do most of my cooking and baking. certain someone has remodelled the kitchen at the shack, which was very nice of him. the old kitchen, well, let's just say the stove didn't work properly and there were some issues with the oven. i guess it was the xmas turkey that almost didn't get done that prompted certain someone to take my pleas for an updated kitchen seriously. thank you for that.
once in a while we go to real countryside, up to the cottage at the lake and where my parents live. my brother and his family have moved back to that town some years ago, we go there to see them as well. my 2 nieces and nephew are growing up too fast, i would love to be able to spend more time with them.
today, before the walk with the dog, i put my variation of coq au vin on the stove. had an opened bottle of red wine, some bacon in the freezer, onions, carrots, garlic, thyme, button mushrooms and chicken legs. in a dutch oven, i browned the bacon bits and chicken legs, sauteed the finely minced onions, added the carrots, some fresh thyme, pepper and the wine and left them simmering on the stove for the duration of the walk. i had thought we'd be back in an hour but it took almost two. the coq didn't mind, it was amazing, if i say so myself. absolutely in the top five dishes i've ever made, almost better than bandit roast (there will be an explanation in the future). unfortunately, i really don't know what came to me, i forgot to take a picture of the coq in the pot.
i lovelove travelling, anything goes but some would say i'm obsessed with NYC, i keep going there again and again.
take care for now
Lähettänyt liisamarja klo 12:56 AM No comments: