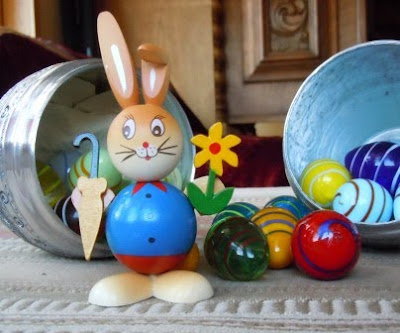 the bumblebees are already busy at the crocuses 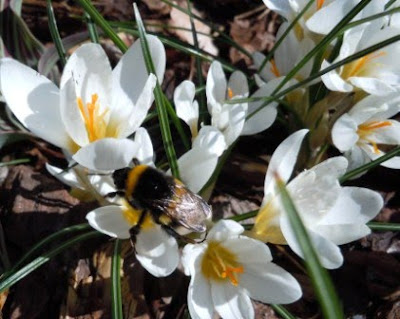 Lähettänyt liisamarja klo 10:10 AM No comments:

lemon risotto with asparagus and peas

as i finally got the "real" risotto rice, carnaroli, i decided that i would do all the fancy stuff that goes along with the real stuff...and turned to martha for the recipe... 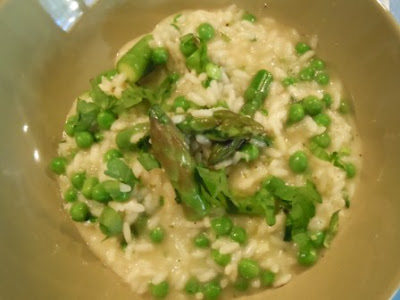 the recipe is from the martha stewart living cookbook, the new classics. couldn't find the exact recipe online, but there are several similar, just have your pick...here's what went into mine.

the carnaroli is from delideli at hakaniemen halli. i got some organic lemons in order not to get all the pesticides with the peel...and the parmesan! got that from hakaniemen halli as well, will not ever by the prepackaged version, ever. 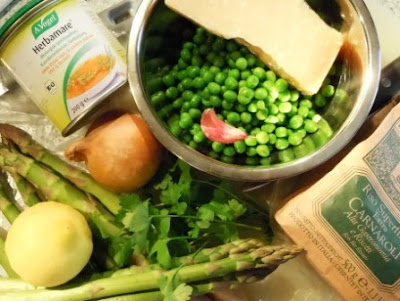 my very messy mice en place. with all the stirring going on with the recipe i thought this was more than necessary. 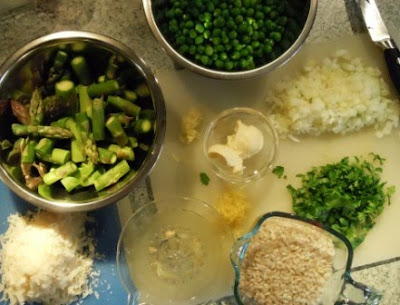 i even got the wine called for in the recipe (by chance!!) 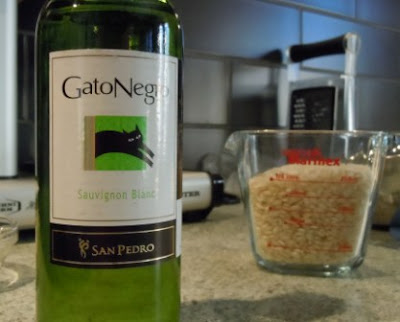 i still lack the experience of a real italian risotto but this turned out great, very fresh, lots of layers of different tastes. i bet it would have a whole lot better with lots more salt but i just can't put that much in...this would become a staple in my kitchen if not for all the stirring...too much work! 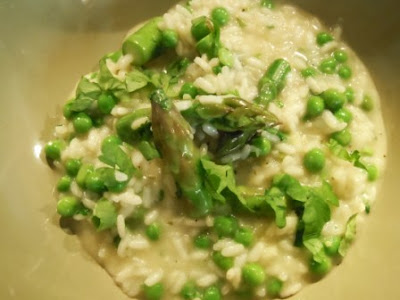 Lähettänyt liisamarja klo 9:19 AM No comments:

we were back form switzerland late on friday evening, but the weather has been too nice to sit indoors and post on the blog...sorry about that.

on sunday, however, i felt like it would be a good day to bake bread. 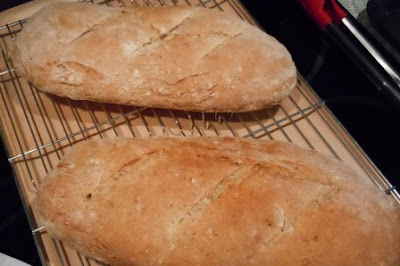 baking bread could do with the fact that i found the remains of the biga i used to bake ciabatta little over a week ago. i've read about making your own biga and baking with it. the fanciest versions take 14 days to get going, and you need to feed it at specific times...too much hassle for my taste. 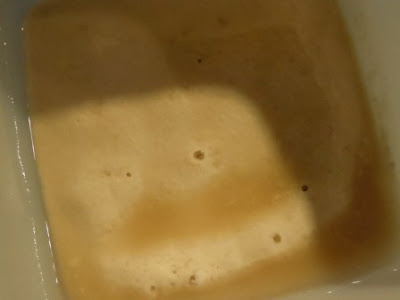 ...mixture of these two flours in fact. 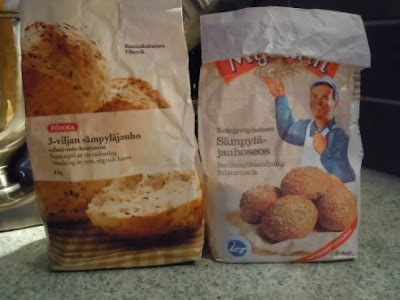 gave the dough a good workout with my kitchen aid. 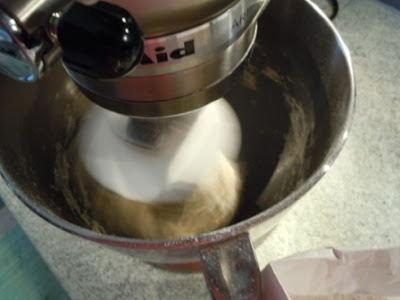 after the first rise i punched the dough and formed two loaves out of it... 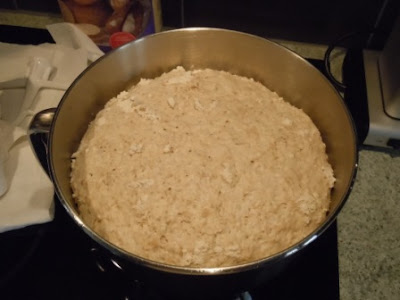 the loaves here after the second rise. i let them rise on these smaller baking trays and had the big ones in the oven getting hot. when the oven was hot, i just slid the loaves onto the bigger ones in the over. it seems the bottoms get a harder crust this way. i will keep on doing this until i get my pizza stone to bake on. 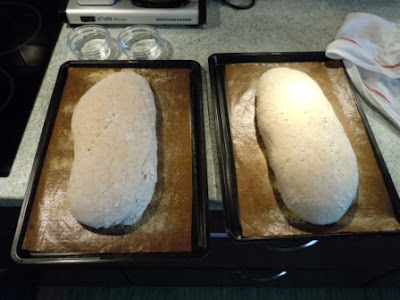 baked them in 200C oven with convection on. in the beginning threw some water on the bottom of the oven and placed 2 little bowls with water on both baking trays.

the crust was perfectly hardened and the inside moist. not sure if i've mentioned this before, but my meter on how good the home baked bread is, is how the bread tastes on day two, or three. sure, warm bread is always good, but let it sit for a day and it becomes soggy, soft and sometimes develops a nasty yeasty flavor. this one was nice even on day three, thank you saint honoratus, or something... 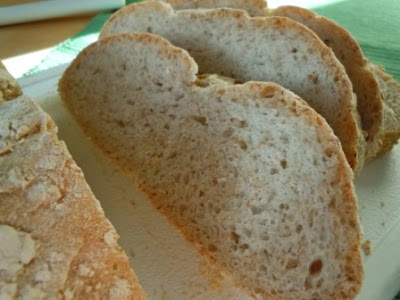 my previous attempt to make a hollandaise ended very messy. long story short, i had cooked and reduced the vinegar and spices, whipped in the egg yolks in a double boiler, seasoned the sauce (so good!!) when i took hold of the sauce pot with my left hand (important detail)...next thing i know, there is this huge pain, in my left hand, and because of the pain i let go of the sauce pot...there was probably a one fifth left in the pot, rest of the sauce was all over the counter and the floor. i was not a happy cooker.

anyways. yesterday i chose to make bearnaise instead of hollandaise. there were numerous recipes in (my numerous) cookbooks but i chose anna olsen's recipe for the fact that it looked the simplest...the recipe is from in the kitchen with anna (amazon sells it, too), but doesn't seem to be online. here is what went in: melted butter, egg yolks, lemon juice, white wine, tarragon, salt and pepper. 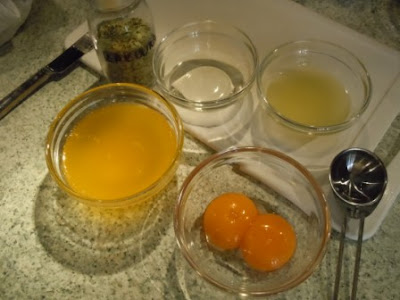 it's spring and time for asparagus... 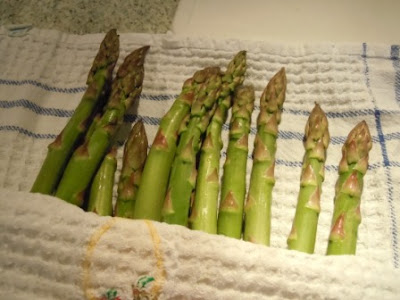 ...fried us nice steaks to go along with the green goodness. 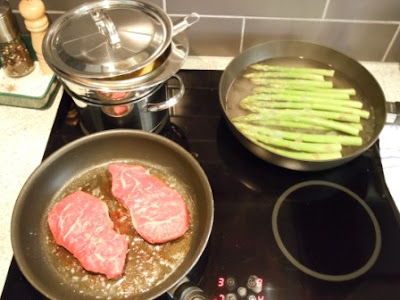 certain someone seemed to enjoys his dinner a lot. however, next time i will definitely use fresh tarragon in the sauce. i know tarragon has somewhat of a slightly bad reputation, but it does serve a purpose in the bearnaise, i think. just don't go overboard with it!

a lot of sauce you say? well, i figured that since i eat bearnaise maybe three times a year, i can have all i want when i do eat it... 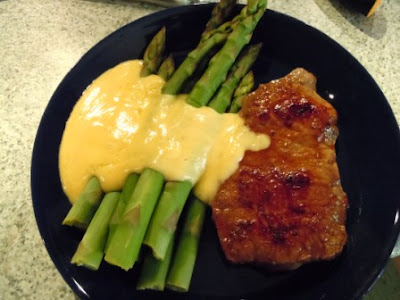 the swiss pictures are coming, please be patient. there are a lot of them and i still need to pick the best ones to post...
Lähettänyt liisamarja klo 10:25 AM No comments: