few weeks ago i noticed 2 boxes of quinoa that had appeared in the pantry. as i am (read, i try to be) on rampage to empty the pantry and use up almost everything before getting anything new, i took one box and a moment to think what could be cooked with it. as usual, i took the easy way, cooked the quinoa according to package instructions and dug out these veggies from fridge 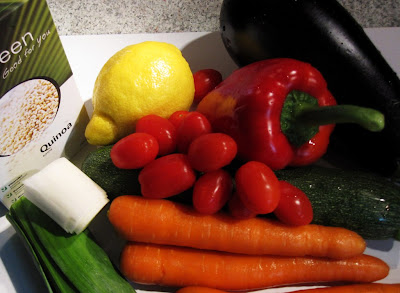 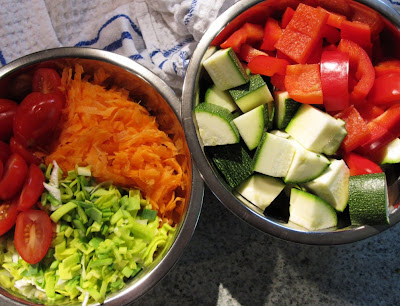 the cooked quinoa look a bit weird, i had thought it would look something like couscous but bigger grains...live and learn 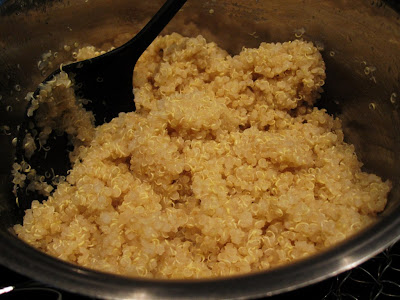 i roasted the eggplant first on it's own in 250C oven for 20 mins, then added the pepper and zucchini and roasted all together for another 20 mins 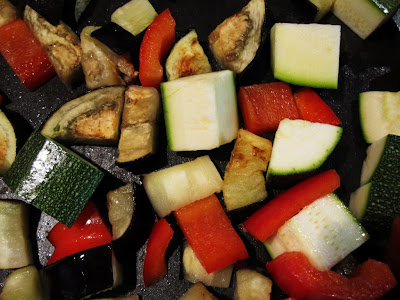 meanwhile, i placed the cooked and somewhat cooled quinoa in a big bowl and grated the peel and squeezed the juice of one lemon on top of quinoa, mixed well 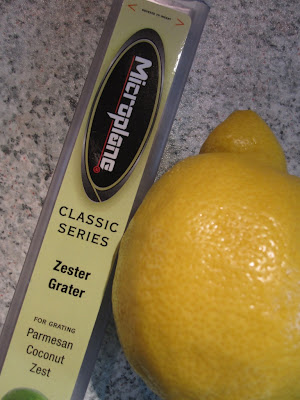 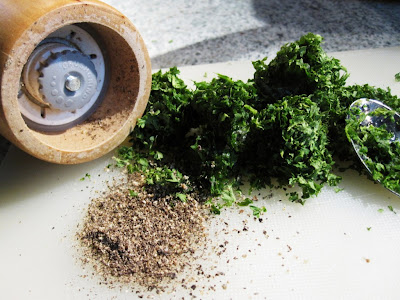 when served i added one tbsp of olive oil on top. there were leftovers and they tasted nice even cold. if you want it easier, leave out the eggplant and don't cook zucchini and bell pepper 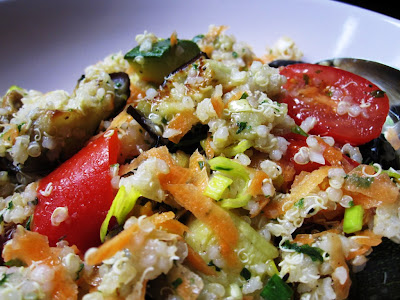 Lähettänyt liisamarja klo 9:31 AM No comments:

managed to get up at 5am and drove here in the rain. after today's excercises i guarantee my butt and stomach will ache tomorrow... did go out this evening and took some pictures but i guess i wasn't in a right mood, the pics went straight to garbage...

here are a few from last few weeks...first, my favourite, the peony. i will throw a fit if they only bloom while i'm away! 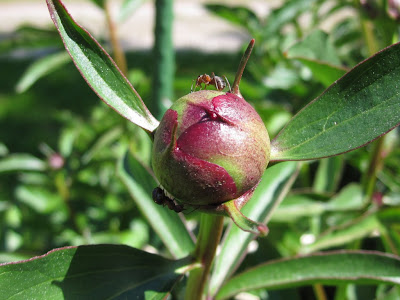 this little green creature seems to like the peonies as well, or maybe it is there for the ants... 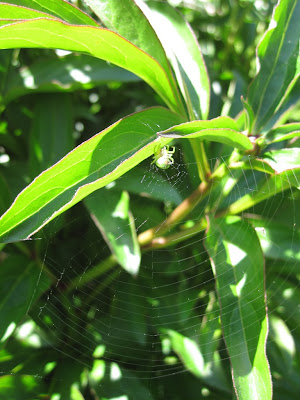 the dog eats his salad on the go 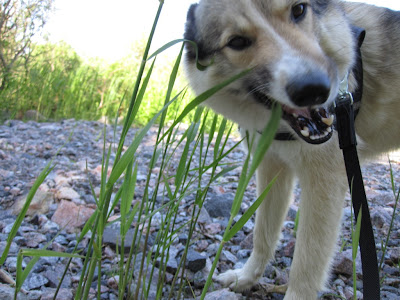 Email ThisBlogThis!Share to TwitterShare to FacebookShare to Pinterest
Tunnisteet: garden, nature, the dog

i was at the cottage over the weekend as the rehab part III starts on monday and the cottage is kinda half ways. i should wake up at 5 am tomorrow...it's been a long time since i've had to get up that early. well, actually, i think march 12th was an early start, that would have been the date of my unfortunate wrist surgery. (i might be able to on for ever on the surgery but i almost, kinda, decided that i need to think it'll be better with time...)(however, i'm hoping it's sooner rather than later!)

rehab III, you ask? rehab II was in late march when i was still in cast up to my armpit. decided to keep things simple and stay home for part II, too much hassle to travel with a huge cast...

now, my mom digs out curious pieces of meat from the freezer every time i go to cottage, nothing wrong with that, on the contrary. it's just that i ate so much, most of it something not good-for-you, not at all. like these pork ribs... 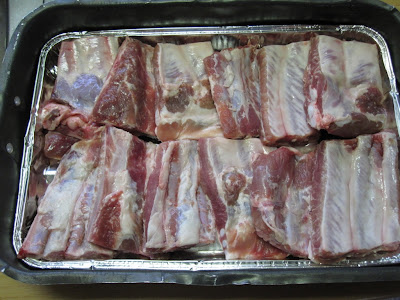 the original idea was to cook them in the oven until almost done, then drench them with bbq-sauce and cook some more until very well, fall off the bone done. we baked them in a wood burning oven that is very old, and that my dad has fixed a bit. it still works, perhaps not to bake pulla in, but this type of food, perfect 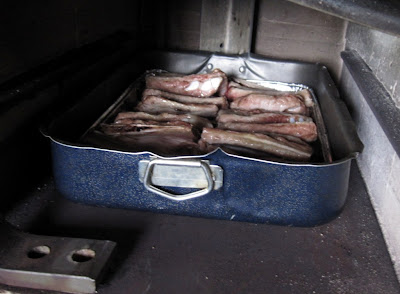 the smell from the oven was too amazing, i didn't want to spoil the perfect biggy moment with any other taste... mom and dad did add some salt on theirs 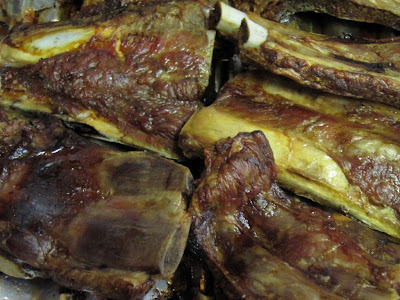 the fork and knife are in the picture only for show...this was mess-making finger food. my camera has suffered quite enough, didn't want to add pig-grease onto it, otherwise i would have taken a picture of the mess... 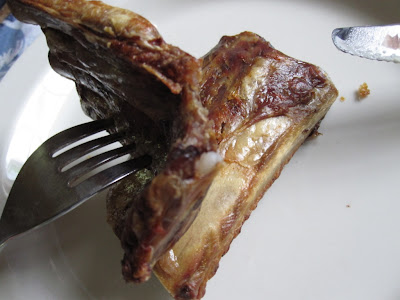 cabbage rolls? in the summer? are cabbage rolls summer food? what summer?? it was +12C this morning at the cottage.

the reason for cabbage rolls is very simple. saturday was cold and rainy, as well, and we thought that we might drive to town as saturday was a market day. they had lots of flowers on offer, some blood sausage (the only stall with a long queue in front...), more flowers, and one stall selling sausages, cured meats and cabbage rolls. i saw them, my mom saw them and my dad saw them. he was the only one to say it out loud "let's buy some". hmm, will i buy something that i can do myself...on a rainy weekend with nothing to do? next stop was the grocery store to get some cabbage, mom had minced beef in the freezer (why aren't i surprised?)

the wood burning stove again, might as well use it as it was hot and ready to roll. did you know that moms come handy when there are heavy pots to be lifted? i know, it's a disgrace, i should be able to lift my own pots. or at least use two hands to lift a cabbage 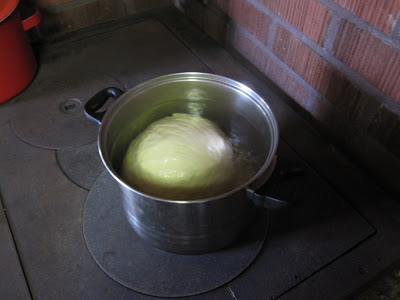 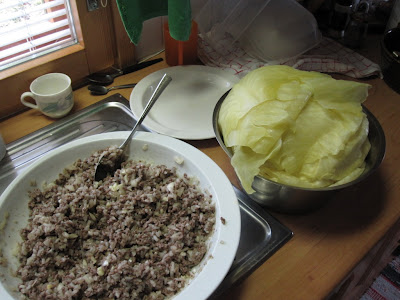 yes, the tiny yellowish dots on the rolls are butter, with dark syrup on top...going into the same oven 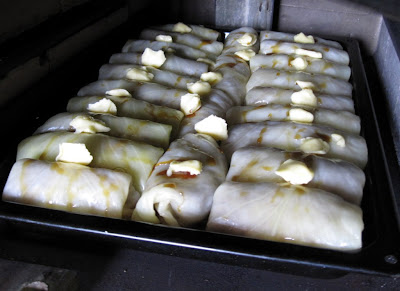 i have no idea how hot (or cold) the oven was but 2½ hrs later they were done. i had to take a sampler, with lingonberries (and let's forget what i had had lunch only a couple of hrs earlier, shall we?) gosh, my aim for rehab was to loose 6 kgs of fat by october. yes, fat, not weight. one can always dream...right now i'd be happy with loosing the 6 kgs in weight...hmm, maybe a miracle happens and...no? 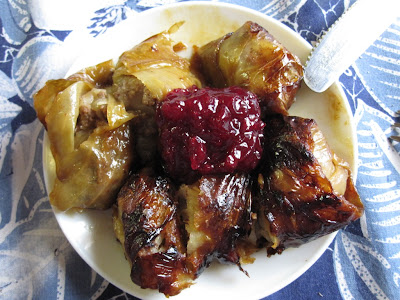 we are now in the curiosities department. this thing in itself isn't curious, what is curious is the fact that my mom still uses it. did yesterday morning, i saw it. she heats it up, you guessed it, on the stove. it looks like it has been electrical, but works fine when heated on the stove... 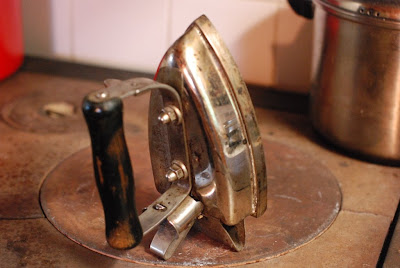 this little shirp (and siblings?) made a huge racket whenever i passed their house on my way to the outhouse (yep, outhouse. there is a flush-toilet in the cottage but only little girls (read my nieces) are "allowed" to use it. however, when it's early in the morning, late at night, raining, snowing, freezing cold (like below -5C) i consider myself a little girl. for the record, my dad does use the flush when it's below -10C...too much information? sorry about that, just wanted to share! oh, guests can use the flush whenever)

back to the shirps...on sunday afternoon i finally had a moment (you know, all the cooking, attending the fire in the stove and such) to take my camera and a stand to get a better picture of them peeking out of their house, maybe catch mama bird bringing bugs to these guys, only to find out they had moved, there was no racket no more... 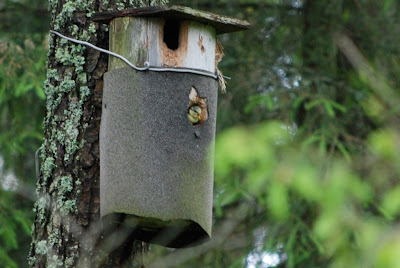 however, this house had birds in it, damn fast ones if you ask me. if i was any good with birds i would tell you what kind they are, but i'm not. what i can tell you is that these guys are different from the ones making the racket. i also suffer from amnesia 'cause i know dad told me what they are, just can't remember 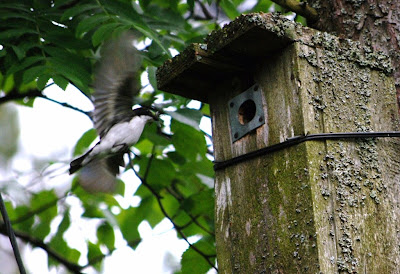 can you spot the mama bird? 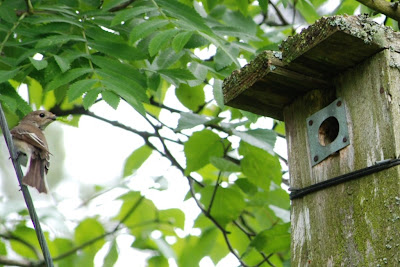 we do like these slippers, they keep the toes toasty in this wet and miserable weather, in the time of year some people somewhere call summer... 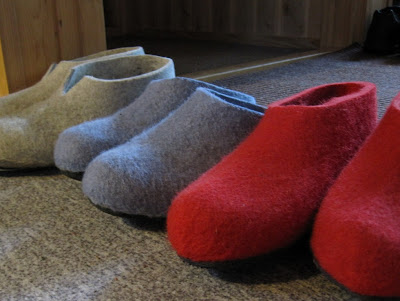