so much for it raining the whole day today... no sous chef for me, not surprised. i started preparing this beef pot roast/stew almost right after breakfast (for those of you not in the know, that would mean closer to noon than sunrise).

yesterday at the store i noticed some fine looking beef, namely shank (no bones) and decided that it would be great cooked long and lingering in oven. there is a pot roast recipe in my new cookbook fresh, but as certain someone specifically asks for low-fat whatever, i skipped the bacon from my recipe (but missed it the whole time!) 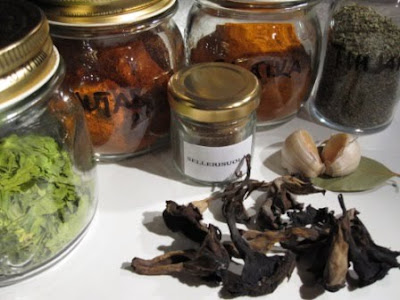 we have a lot of dried mushrooms, needed to figure out a way to use them. black trumpets have quite a strong taste, that's why i took only a few and soaked them in hot water for 15 mins before adding to pot. button mushrooms would work great, but feel free to leave them out if mushrooms aren't your thing. 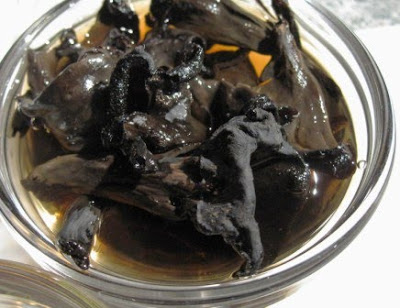 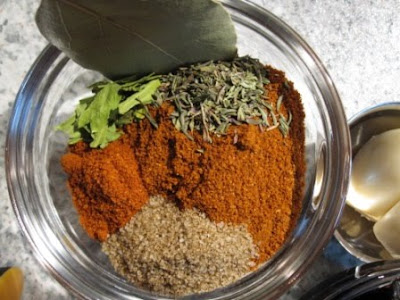 initially i thought of using a can of tomatoes, but i didn't have any, so i peeled 2 fresh ones. peels come off easy after you dip the tomatoes in boiling water for a minute, rinse in cold water after the dip 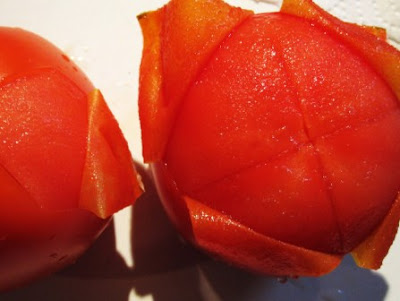 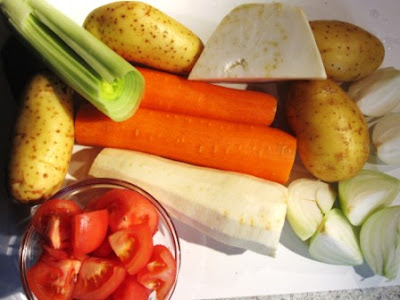 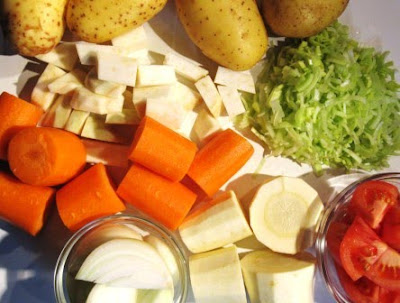 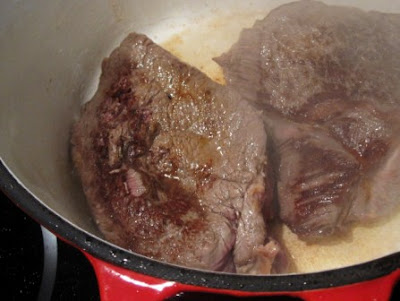 took the meat out before adding all the veggies (except potatoes) which got turned around while scraping all the brown bits from bottom of pot. 2 gloves of garlic was grated in at this point, all the spices went in now as well 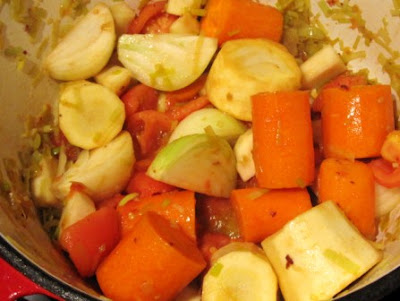 normally i would use red wine as cooking liquid but we only had big bottles of red (and neither of us felt like finishing the bottle) so i used a 2,5 dl bottle of chardonnay instead of red, i added some 2 dl of stock as well. if i'd been using canned tomatoes i probably would have had enough liquid without the stock.

after pouring in the wine, i added the potatoes (carefully washed, peels on) and linda snuggled the browned meat on top. the meat should be in the liquid but not covered all the way. then, lid on and into the oven for 3 hrs (or more if your meat is thicker, mine was about 3 cm thick). 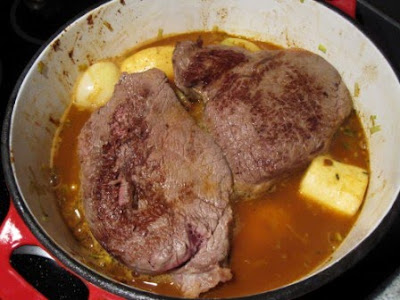 meat was turned after the first 1½ hrs of cooking, it smelled so gooood in the house! the potatoes were soft but not mushy because of the peel. celeriac and leeks had vanished and thickened the sauce, parsnip and carrots were oh-so sweet. you could taste the trumpets but they were not overwhelming. because of the tomatoes i thought of adding some sugar to balance their acidity but the sweetness of root veggies corrected that 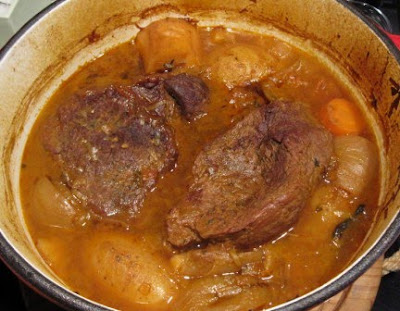 the meat was so tender and as i haven't had beef since i can't remember when, this really hit the spot. however, can't think of any reason why you couldn't make this with any other meat as well. did i miss, or even remember, the bacon at this point? well, let's say i didn't even think about bacon while eating this. though, we both agreed that this dish would be even better on a really cold winter day after it's been snowing for hours and hours and you come in from shoveling the snow to eat it... but there is no sign of snow over here, only rain. while i was prepping the stew, certain someone went out to chop some firewood. and why not, at that moment the sun peeked from behind the clouds, it's was light and pretty. but, only 15 mins later it was pouring down with rain... stubborn that he is, he chopped the firewood and came in soaking wet. later on, there was clear long enough for him to take the dog for a long walk.

so what to do about pulla? decided to take out my kitchen aid and make it do the work. the recipe for pulla is on every bag of all-purpose flour in finland, but for those of you somewhere else, here goes:

depending on which yeast you use, you either dissolve the fresh yeast to 38C milk, or mix the dry yeast with flour and add to 42C milk. i used dry yeast so here is what i did.

i mixed the yeast, salt, sugar and cardamom with 6 dl flour (i changed 2 dl of flour to whole wheat flour) and added the mixture to 5 dl of 42C milk and the egg in the mixer bowl, mixed with dough hook until combined before adding more flour. i added the butter towards the end of adding the flour. my mom does this mixing part by hand, always has & always will, usually i'd use the dough hooks of my hand held mixer, but kitchen aid is easier on my wrist.

i used only 13 dl flour, sometimes you might need even more than 15 dl. the dough should be elastic but not too hard, harder dough is easier to handle but the baked bun might be too hard as well (literally! my first batch way back when were so hard they could have been used as baseballs...)

you could add another egg for the recipe, and/or butter for a more festive version, and certainly use the whole 2 dl of sugar. i was trying to cut down on calories without sacrifying taste too much.

here is the dough before first raise, which happens in a draft-free place, bowl tucket under a kitchen towel 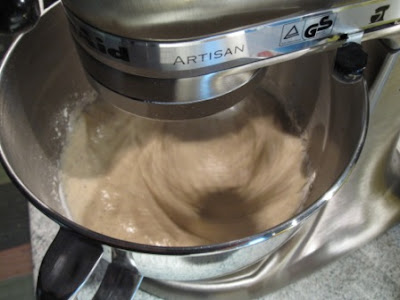 before first raise, whic happens in a draft-free place under kitchen towel, until dough is doubled in size 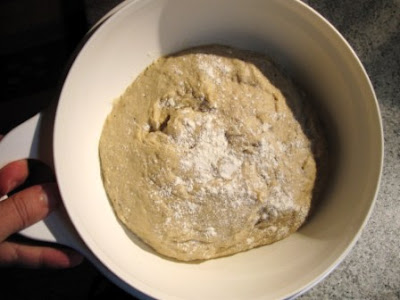 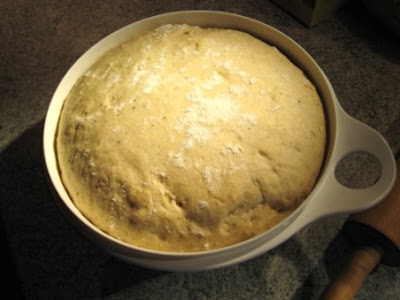 after the first raise you smack the dough a bit 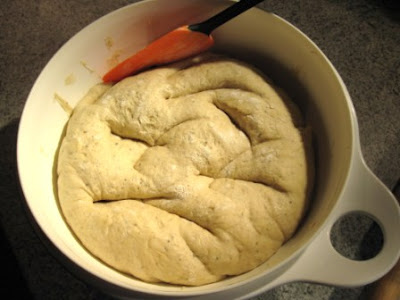 divide it in half, place one part on lightly floured work surface, leave other in bowl covered 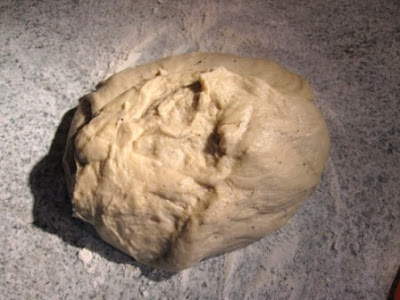 first flatten dough with the palms of your hands 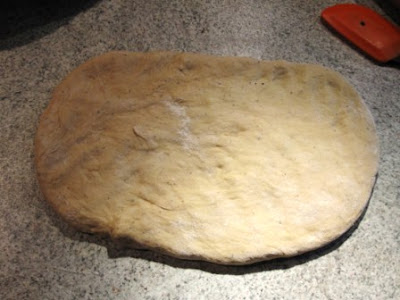 then, with a rollin pin, roll out into a rectangular measuring approx 60 cm x 35 cm, approx 1 cm thick i used oivariini (kinda butter & vegetable oil product), cinnamon and sugar here. first spread the whole dough with oivariini (or butter, or margarine, use your conscience as measure, i was trying to go healthy here and didn't use that much), then srinkled sugar and cinnamon on top. again, as much, or little, sugar as you like. not into cinnamon? well, hold on a sec and i'll show you an option 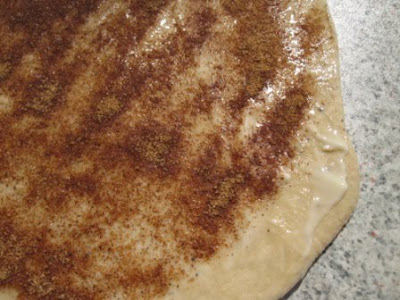 then start rolling from the long side, try to make it as tight as possible without squishing the dough, you should end up with approx 60 cm long, 5 cm wide log 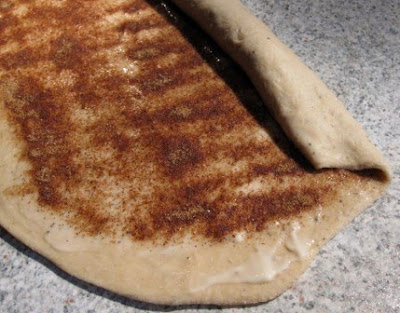 here is your option to cinnamon, coconut. you could also use sliced almonds, crushed nuts of your liking, vanilla pudding. i even tried chocolate chips once, perhaps not one of my best versions, but very tasty when fresh out of oven... 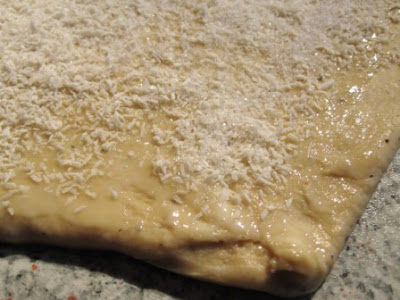 once you've rolled the dough, divide it into 12 equal pieces. bench scraper works great, or a dull knife. do the same with the other half, you'll get 24 buns. this time i just placed the pieces into paper muffin cups. this is before second raise, again under kitchen towel 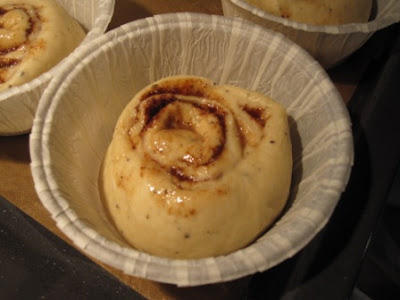 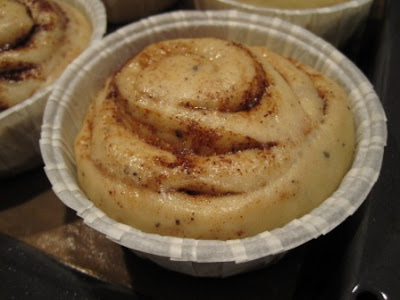 final product after 11 mins in 210 C oven. the flour bag recipe says to bake for 5 to 10 mins in 225 C oven. these were big guys, that's why the adjustment in baking time and temperature. cinnamon version here 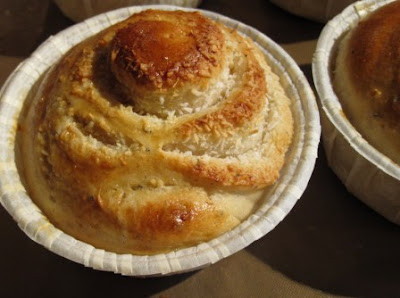 aah! i only ate two. honest! 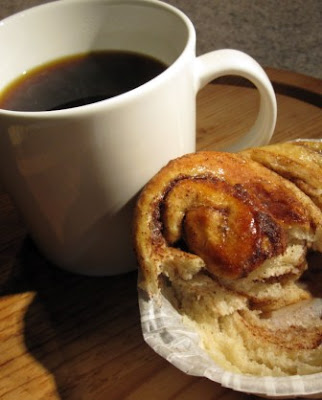 anna olson's fresh finally arrived today! i ordered it already in june, well in advance of it's september publishing date. usually amazon ships promptly after the publishing date, no idea what happened here, but i'm glad i finally got it. (M, you will get yours soon!)

quickly browsed the book thru, like i imagined, the recipes are from anna's tv-show fresh (that is now going on as re-runs, or should i say re-run's re-run's re-run...) not complaining, i like the show and it is kinda hard trying to write down the recipes from tv. there are definitely some that i need to try: spiced chocolate tart pear tart (mom saw this on tv and expressed her interest in trying one), plum clafoutis and club sandwich roll just to name a few.

i was almost tempted to pledge doing what julie powell did to "mastering the art of french cooking" (movie julia/julie) but as fresh is all about using produce that is in season, so thought i will pass. on the other hand, if i start now, i could do the book starting from winter, hmm... 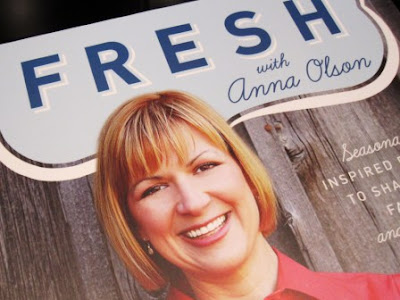 for the last week my cooking has been close to zero, unless you count brewing a pot or two of coffee cooking... i was ailing at home, certain someone picked me up from my apt and we went grocery shopping before coming to the shack. since the forecast says it's going to be raining tomorrow as well, certain someone won't be doing anything outdoors, therefore i'll have an assistant in the kitchen (he just doesn't know it yet...)


somehow the amount of my cookbooks came up today (he noticed fresh...), certain someone seems to think i have quite enough and that instead of getting new ones, i should use the old ones. yes, yes, yes, but i do go back to old ones every once in a while. like today, i wanted finally get the meat parts translated properly from english to finnish, no easy task since the carcasses are cut differently. i pulled three books, one in finnish and two in english (one of which was martha's cooking school).

the finnish book was valitut palat's (=reader's digest) ruokavuosi (based on reader's digest the cookery year) from 1975, that's 30 odd yrs old folks! mine is from that year, there is at least one revised version from mid 1990's. what surprised me is how relevant the book still is today 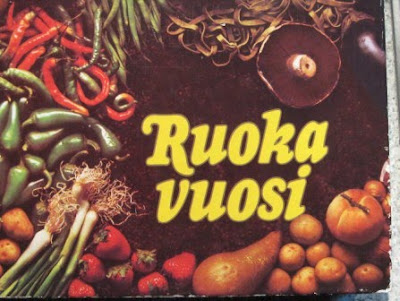 i got mine from mom eons ago (or did i borrow it and forgot to return?), and it's been well used over the year. not so much for the recipes but for cooking techniques and general information on how to handle, store and prepare different foods. there is even a chapter on what should be considered when designing a kitchen. as you can see, my issue is well read 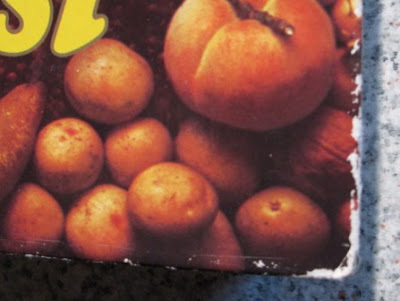 this afternoon, while enjoying my cup of coffee, i had a faint feeling that some pastry would be nice, even checked the freezer for some pulla, none there. 10 mins later certain someone asked if there is any pulla, not knowing what i had thought only minutes ago. so, i got an idea and casually mentioned that WE could bake some pulla tomorrow... he didn't outright throw out the idea, so i continued and said that he would have to help me in making and handling the dough... still nothing... is saying nothing same as saying yes? in this case, i think so! i would love to bake pulla (or anything!) but my wrist isn't well (still) enough for baking solo. well, we'll see what (if anything) happens tomorrow...

noticed the other day that i have new readers, dobrodosli!
Lähettänyt liisamarja klo 7:22 PM No comments: