the other moose roast

this moose roast couldn't be simpler, just peel and chop some root veggies and onions, throw them into a roasting bag (another brand here), tie and season the roast and place on the veggies, close the bag and cut off little bit of a corner to let out steam... 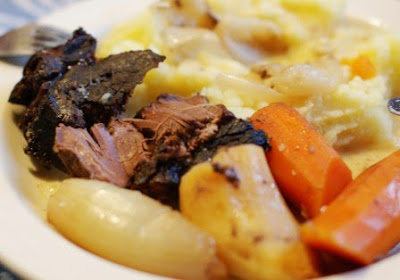 i went heavy with onions 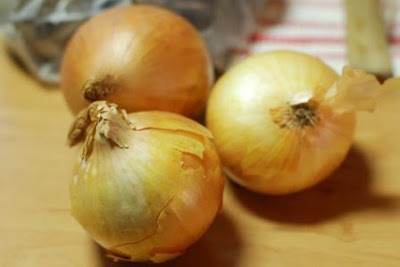 but also used carrots and parsnips. i seasoned everything very lightly (salt, rosemary), those who like salt can add some at the table 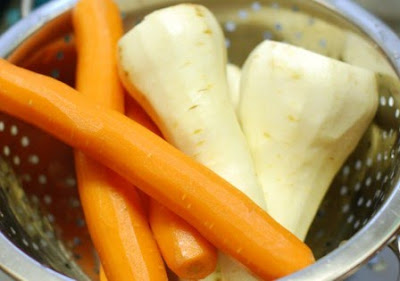 cooked in 180C oven for 2hrs, the meat was falling apart. i did roast some red beets as weel, but in a separate bag, they would have made everything reddish (not very appetizing...)

i do like using the bags, there's no messy oven to clean up, all the juices are gathered in the bag and are easy to pour into a sauce pan for making gravy, meats come out juicy (this time mine might have stayed a tad bit too long in the oven...) this kind of cooking works well with all kind of meats, and veggies, too.
Lähettänyt liisamarja klo 11:11 AM 2 comments:

mom always digs deep in the freezer when i'm going to the cottage...this time she pulled out 2 moose roasts, one i prepared at the cottage (more about that tomorrow) the other marinated in 2 dl of this... (rest of the wine was consumed with the other roast) 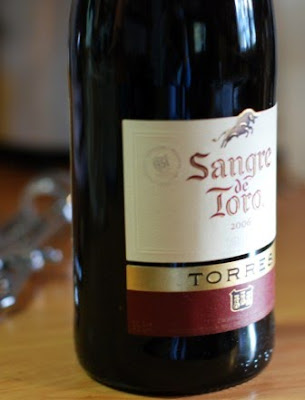 i had already soaked this retro römertopf pot for 20 mins before pouring in 2 tbsp of olive oil. i can't remember when and why i stopped using these pots (i have 2), they are very handy and reduce the hands on time considerably 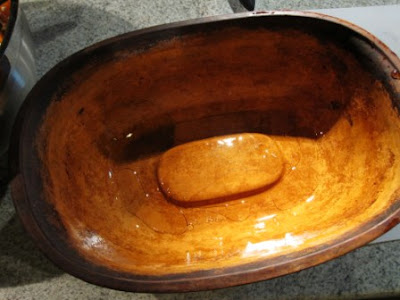 i did take a picture of the meat after it had soaked in the wine for 48 hrs, but let's just say that the meat wasn't that photogenic and leave at that. i made a mix (and a slight mess) of 4 diced carrots, 200 gr of white cabbage shredded (quite fine), one minced medium onion, 1 cup of rice, 3 grated cloves of garlic and 1 cup of vegetable stock. 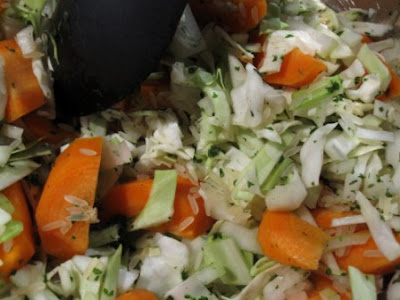 i made a nice bed for the tied roast, then seasoned the meat generously with crushed black pepper, closed the lid, placed the pot in a COLD oven and only then turned the temp to 200C 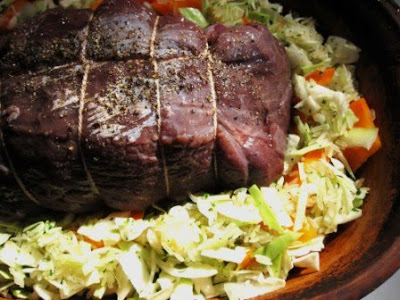 after 2 hrs the rice was cooked, the veggies tender and the inside temp of the meat was 80C 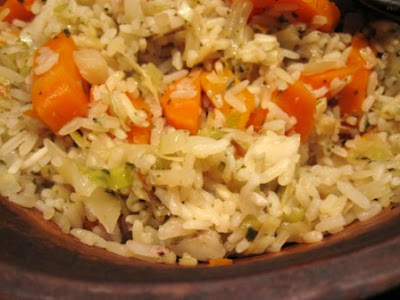 we had just finished the pike dinner so i certainly wasn't hungry when i took the pot out of the oven, but couldn't resist a bite to taste it... 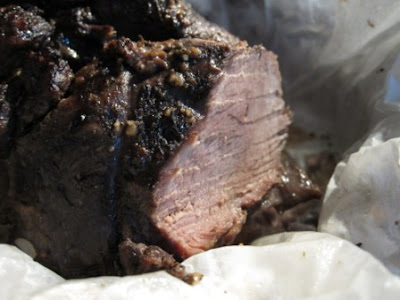 the whole batch made 4 lunches to go, and the cold meat is excellent on rye bread 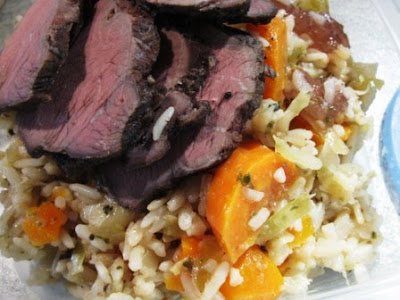 Lähettänyt liisamarja klo 11:29 AM No comments:

as i've mentioned time and again, my dad thinks pikes really aren't for human comsuption. i've tried to prove him wrong earlier and i wish he would have been at the shack yesterday for dinner to have some of this...pan fried (in butter) pike tails with mustardy butter and green salad 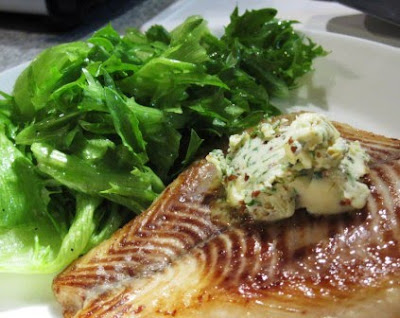 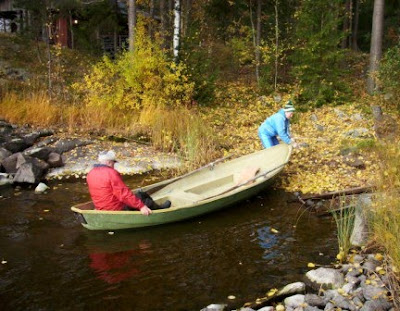 there had been a nice size pike in the nets, my dad would have thrown it back to the lake if we weren't at the cottage. could be the fact that they get so much fish from the lake that pike just isn't that tasty, don't know. we were happy to get this for dinner. 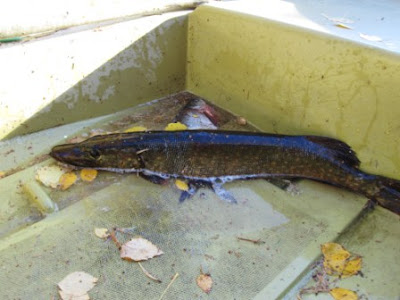 dad was nice enough to even filee the pike for us. not that i couldn't do it, i just wouldn't want my dad watching me do it...the dog was curiously watching the procedure 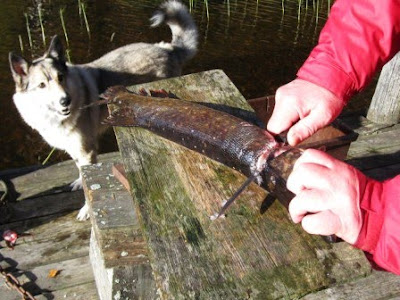 but then again, he did get to play with the head and the bones (a decision i regret since he wasn't smelling very nice in the car on the way back home) 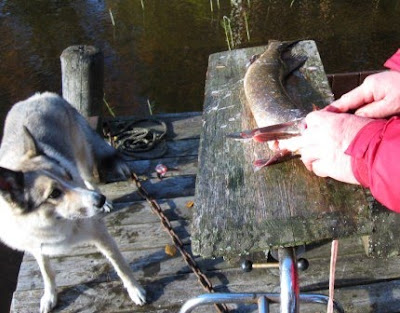 mustardy butter was made with a blob of butter, grainy dijon mustard and minced dill. change the dill to parsley/tarragon/thyme and this goes with ebverything. 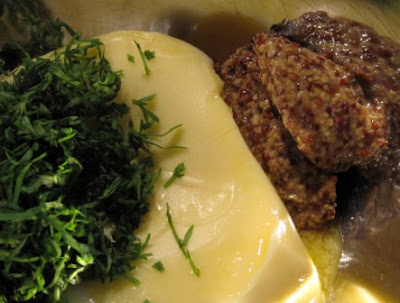 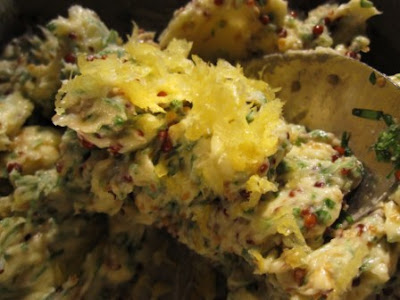 dad, you really ought to try this once! 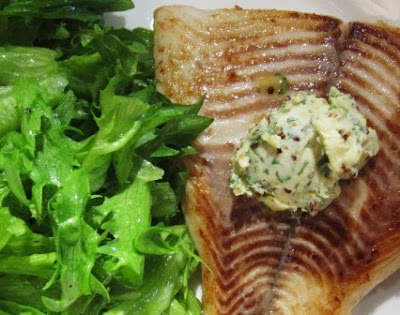 i was happy to have brought my red jacket to the cottage. the moose hunting season started a few weeks back, the season for birds (black and hazel grouse, and such) ends in a few days. there were shots somewhere in the vicinity, and had we had the shotgun with us, we would have got 2 black grouses as well. that is, if certain someone would have had the heart to shoot them. i don't think he would have, so, really, we wouldn't have had any... 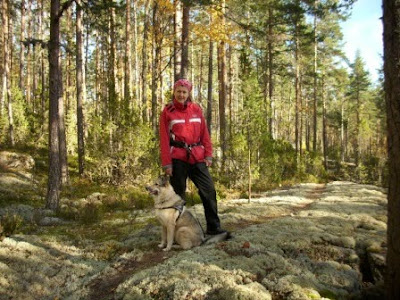 it seems my mom left some lingonberries for other to pick 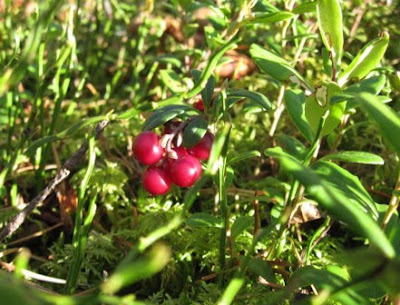 could be my photographic skills, or lack of, that the fall colors seem to bleak away 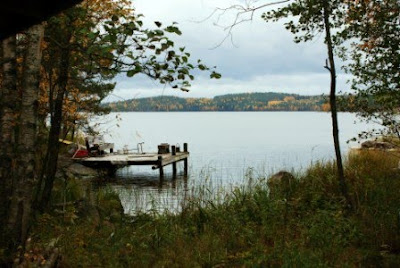 the dog then...where do i start. he snuck away on saturday night (i want to point out that i wasn't the one who left the door unlocked). anyways, the dog just pushed the door open and went on his (merry) way. next morning we found him sleeping at the door of the bigger house (as in we sleep in the smaller).

there is no other place we can let him run free (and that can happen only in autumn and winter, he'd do too much damage to the nesting birds in spring and summer) so him spending the night out wasn't that dnagerous. however, on sunday night we made sure to lock the door, the dog still tried pushing it open and was rather disappointed when he noticed that he would have to spend the night indoors.

the dog got to run all he wanted, one thing he didn't want was to get in the car to come home. but he's been asleep practically ever since we left the cottage yesterday afternoon... 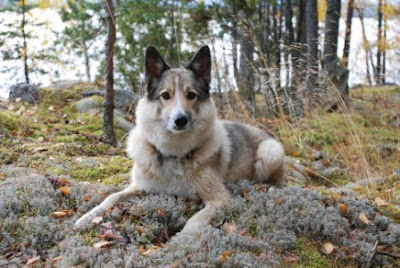 Lähettänyt liisamarja klo 11:31 AM No comments: