took a course in carpentry at karjaan kurssikeskus starting in sept 2006. had seen their info years ago, but always thought that it was too far (80 km), there wasn't time, etc. finally in spring 2005 decided to apply, to my surprise i was accepted. my initial idea was to go and see how i liked it, thinking that we'd work with handtools like chisels and planes. was horrified to learn that we'd be using big machines that could easily chop off my fingers! (i'm glad to say that after 2 years i still have all my fingers in tact!)

we started at the basics which disappointed me because i wanted to make a bookcase. little did i know of carpentry, little i still know. it is overwhelming what one needs to know of wood before even deciding what can be done with each kind of wood, how to cut it, which way to plane, in which order to approach a project... after the first few lessons i was apprehending all that and having second thoughts. all that made me forget everything else (the lousy situation at work, etc) and i noticed that forgetting everything else is actually a good thing. later on, no matter how tired i was from working (i still had nightshifts at that time) and whatever, once i got to karjaa all that was forgotten. must admit we all would have had a lot more progress if we'd actually concentrated on work the whole time. we had such a great group of people that sometimes we ended up talking too much...


here is what i got done in the fall 06 semester, a tiny chair, which my littlest niece immediately claimed as hers. the chair resides at the cottage. i wanted to put a dark stain on it but several people told me that since it is made of birch i should let the grains show. i ended up putting a light colored wax that protects it from yellowing over time 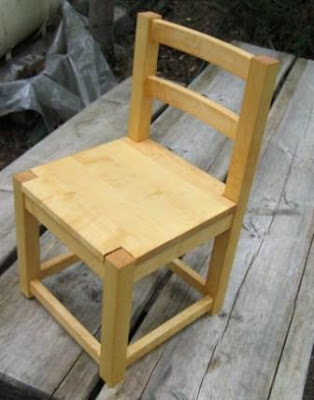 this nightstand was done in the spring semester 07. again, i wanted to put a darker stain on it, i guess this works as well. you can still see the grains but it's not too light colored to stand out among my other pieces of furniture. i had to put the hinges in the summer by myself at the shack. got them level but it would have been so much easier at the workshop 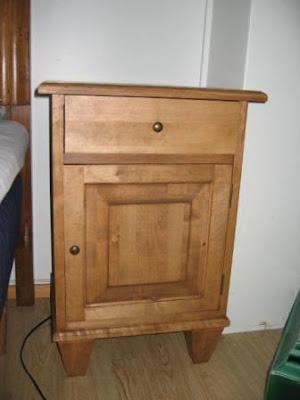 after the first year i wasn't sure i wanted to keep driving to karjaa for another year. the course was on monday and wednesday evenings from 5 to 9, plus one hour drive each way, plus one saturday a month from 9 to 3. there wasn't much time for much else. somehow i ended applying for second year with the intention that i'd take the exam in the spring of 08. i got in again and to start with in fall 07 decided to make my own desing called "breakfast cabinet". it took a while for my teacher to get my idea so don't feel bad if you don't. here is the first cuts with the circular saw 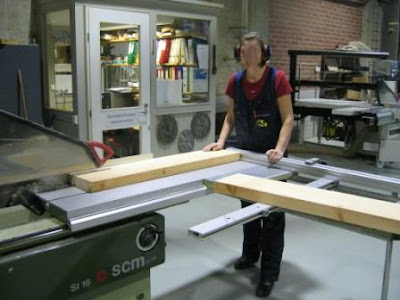 from left, our teacher, classmate, me 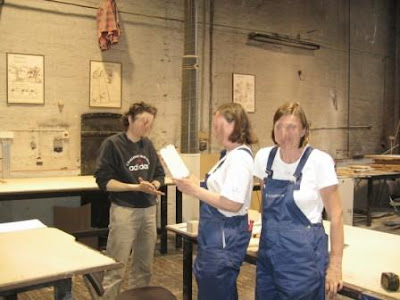 there were certain things that we needed to learn just for the exam, which consists of three parts: written exam on carpentry as a whole plus basics of running a business, a business plan (extensive plan on how i would start a small carpentry business, including financial plans) and hands on exam at the workshop (we were given blueprints of a table which we needed to finish in three workdays). there was one guy that finished in the afternoon of the first day with immaculate results. mine is here, finished the table as per the blueprints but it still needs a stain of some sort (it's only been, what 10 months!) and passed my exam and can call myself a carpenter. can't you see how proud i am! did reward myself with a trip to NYC 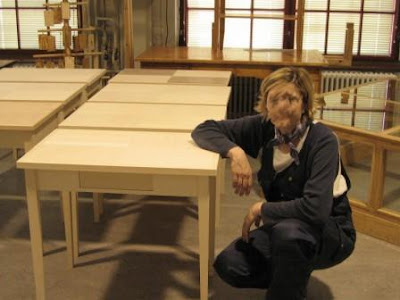 here is my breakfast cabinet, it still needs 3 drawers for the top part, some more assembly on the lower part, and i still need a workshop to do all that in. will finish it one day, you'll see. the idea for this piece is storage and a table for my tiny apt (the one i possibly move into later on after they redo plumbing in the building sometime in 2011, in the meanwhile i'm renting the apt out). the level part supported by the crocked leg (will be an actual leg with a mechanism to support the table) will fold down and look like a door to the cabinet. it kinda is, it just opens upwards instead of sideways. there will be shelves inside for dishes, cereals, etc. no matter what anyone else says, this one will get a dark, glossy stain. the chair and nightstand were made of birch so i kinda gave in because of that, but this is made of pine (no knots may i add!), the grain will show thru anyway 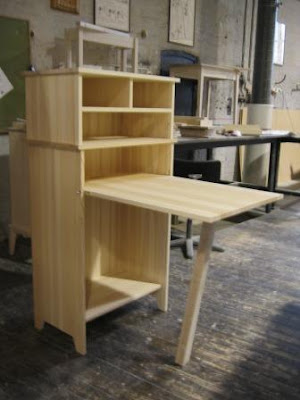 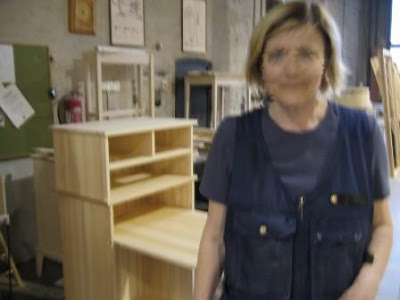 Lähettänyt liisamarja klo 9:57 AM No comments: