back to school - rye bread school

so you thought i was gone, locked up or something...nope, i've been so busy the last few weeks that at one point i wanted to go to dark place and hide from the world. this is going to be a long post, so bear with me.

anyways, on june 7th i got up dreadfully early, picked up a friend and arrived at päivin ruisleipäkoulu (päivi's rye bead school) at 8.30 to make these... 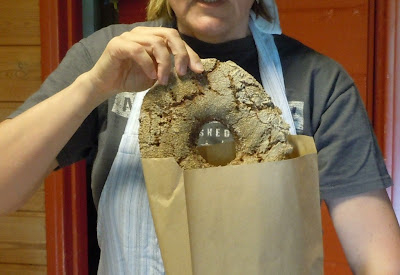 i had wanted to make rye bread for the longest time, setting up the bar way too high to even try. as any finn knows there is rye bread and then there is Rye Bread. i had seen the info on päivi's bread school and played with the idea of attending. i only got the final push once a friend told me that she had had a wood burning fireplace with oven installed in her house. at least she had to learn how to make rye bread, it was decided that we go (or did i decide...) and do something useful on our day off.

once we arrived at päivi's, we were told that certain things had been done the previous day in order to get the dough going...(we made these later in the day for another batch to be baked the following day). it all starts with a starter (how clever!) päivi's starter is from 1958 when her mom made it, at that time most farm houses made their own bread and the starter was, and still is, highly guarded.

päivi's measurements aren't for a two-person household, but rye bread freezes well. here we have "two hand fulls of starter" and 10 liters of warm water and some rye flour (the rye is from their own fields and is milled at a near-by mill as needed) this batch makes usually approx 30 or so round breads.

i remember my maternal grandma making bread, she used to have a barrel like this as well. at those days she would leave some dough in the barrel to be used as starter the next time she baked. rye starter can be frozen, too. 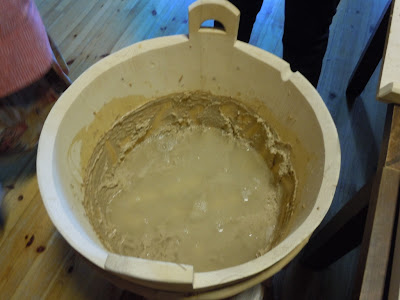 first the starter, water and rye flour are mixed (and mixed and mixed) by hand with a tool specifically meant for this task, there is a name for it, closest any dictionary (including the oxford advanced learner's...) could come up with a name was "contraption".

well, after you have mixed enough, you cover the barrel (there is a fitting lid), leave the dough to a warm place (next to a huge baking oven is ideal) overnight, mixing it occasionally. it should start bubbling in no time... 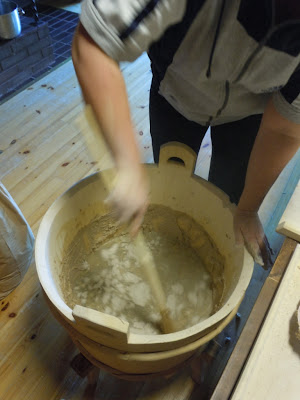 this is where we started in the morning, the dough had been doing its thing overnight and it was time to start adding flour to make the final dough. you add flour until there's enough...and wouldn't it be nice if there was an exact recipe? there isn't. you need to learn the feel of the dough to determine how much flour is needed. with 10 liters of water, we are talking about kilos of flour. 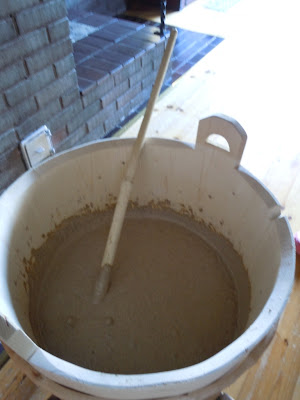 this very bad picture is of the contraption, this particular one is made of pine. someone saw a fitting branch on a pine tree and made it...now i have a job for my dad, find one for me! 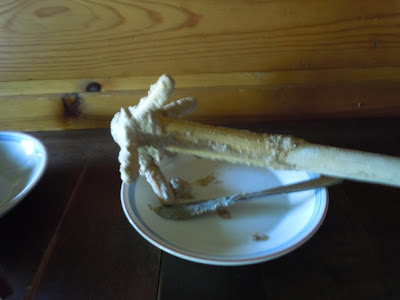 once the dough was "stiff" enough, it was blessed and left to rest for a while. 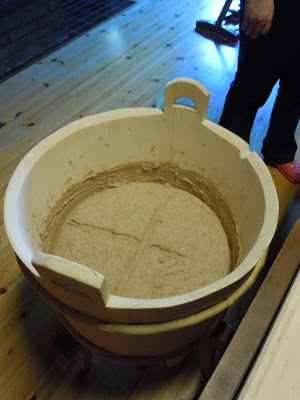 päivi had heated the oven already on the previous day. it takes a lot for that massive oven to get hot enough. one load of firewood (deciduous tree) was burned in the morning to get the temperature high again. the room was sweetly warm for winter, but once we got to work...no wonder summer isn't the time you bake a lot of bread. 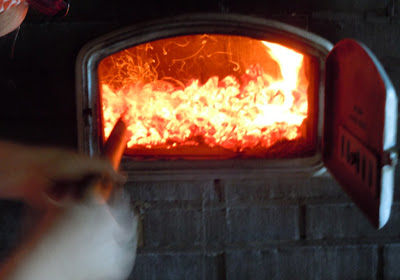 my friend and i both had our own baking stations. 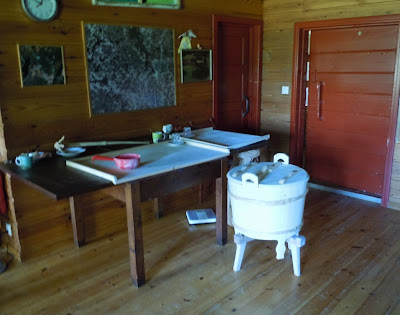 when the dough was determined to ready for baking, päivi showed us how we should handle the dough. as you can see, swift motions are needed. here is where the "stiffness" of the dough comes to play. the stiffer the dough is the easier it is to form, but the harder the bread will be on your teeth...päivi called our batch of dough "challenging" as in it could have used more flour... 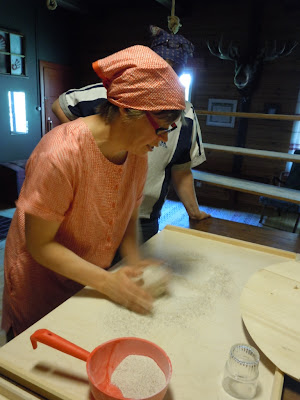 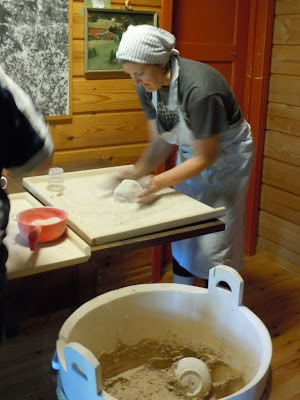 the idea is to form a piece of dough into a triangularly round shape, flatten it to an approx 2cm thick disk and make a hole in the center with the glass. päivi's example of how the bread should look... 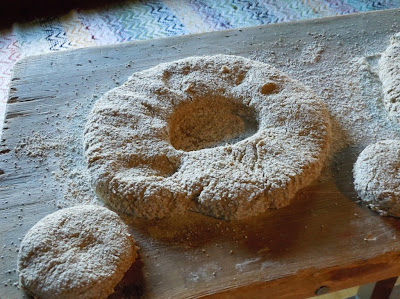 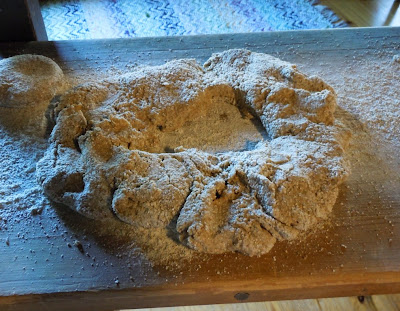 what i love about old farm houses is that they were built pretty with purpose in mind (in case i haven't shouted this earlier, i strongly don't like the modern concept of "form over function", when it really should be function over form. 'nuff said). this stand is eons old and has seen a bread or two.

the breads were left to rest again. they do raise a bit, but nothing like a wheat bread would. 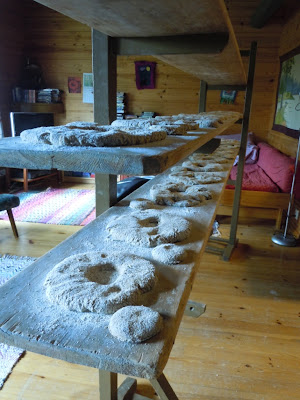 tools of the trade, sack of rye four, narrow peel to get the baked breads out of the over, wide peel to put them in, and the barrel where dough does it thing. 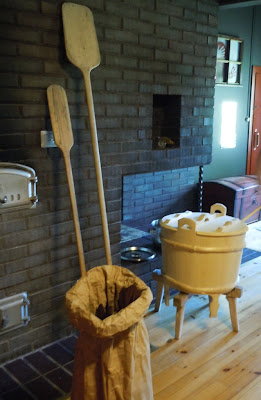 once the woods had burned to ash, it was time to clean the oven, first to swipe the tiny embers and ash into a specific hole in the oven and then wipe the oven with a very wet brush. 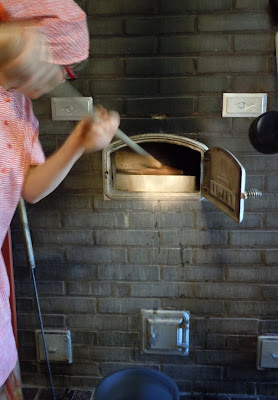 remember my sad first bread...it baked to look (almost) like a real bread!

the bread is baked at 220C until done...to determine doneness you knock on the bottom of the bread, easier said than done as it's rather hot in the oven. the first batch might take anything between 15 to 20 mins, the latter batches a lot longer as the oven cools down. 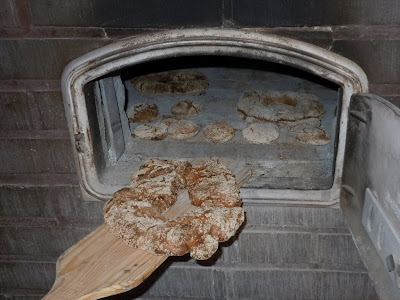 hot and fresh from the oven...you have no idea how good this was! the eclectic appearance of the breads had no affect on the taste, and the taste, of course, comes down to the starter and the quality of flour, and a proper oven. as of now i do not have access to a "proper oven" but once the weather cools down (what an oxymoron! it still needs to get warm!), i will try a batch in the old, regular, electric oven.

right then and there i knew that i had done right to wait with baking rye bread. this bread is proper bread, the way rye bread is supposed to be and taste. for foreigners, i'm sure, it will an acquired taste and pretty hard to come by. 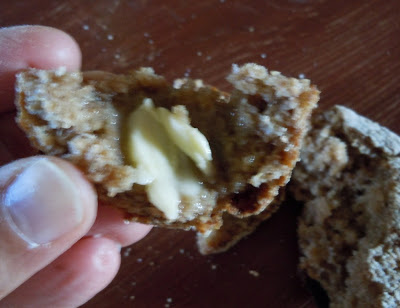 we got to take all this home with us! 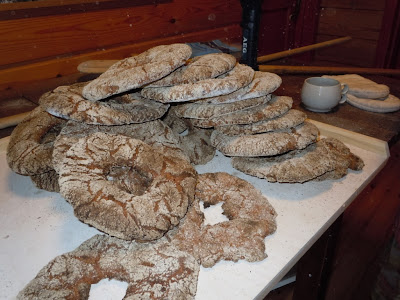 and what's even nicer...we were given some starter, too. i have mine in the freezer now, waiting. 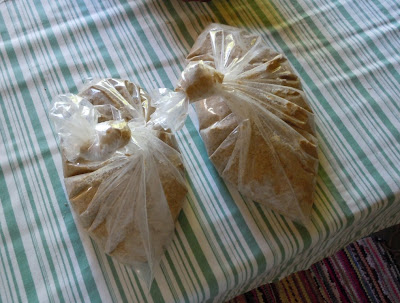 there were pretty things all around the house, set of old keys here. 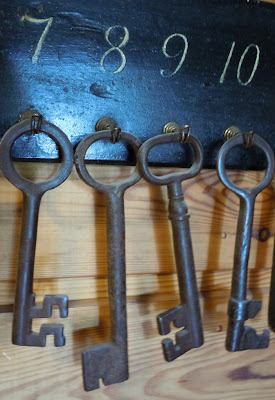 nothing pretty here, somehow my attire for the day made people laugh out loud...was it the matronly scarf around my head, or the apron... 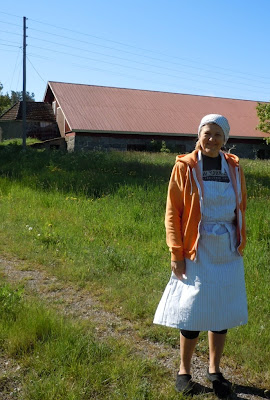 storehouse right across the main house at the farm. 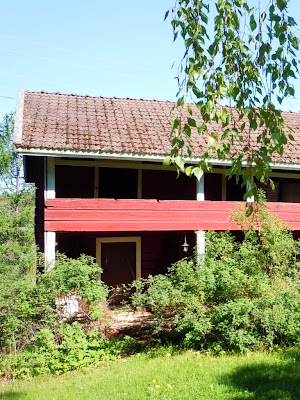 the man at päivi's farm had an art exhibition called "morganismi" around the property. his website is here. 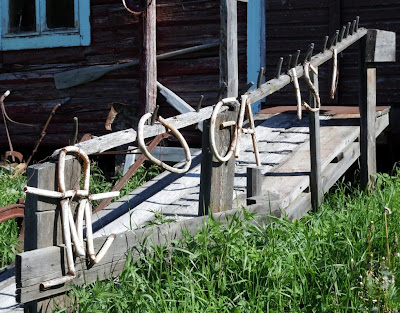 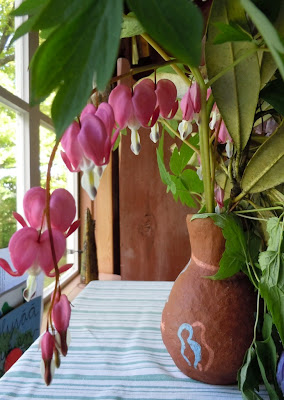 there is a thing or two that's happened since my previous post. at times i've been torn between blogging or sleeping, needless to say sleeping has won every time. all that my own doing, why make such a tight schedule. there is some much awaited vacation time ahead so blogging won't have fight with sleep, at least for a while.

ps. if you happen to be in nyc and you happen to go to union square on a friday, you'll find a stand where RUIS bread is sold. we happened to be there in april and got to taste their bread...amazingingly just like the back home. the company is nordic breads and they have retailers around nyc and they ship...we were told that in the beginning they had hard time trying to find proper rye flour, but now they have farmers upstate growing rye for them.
try some ruisbread with cold smoked salmon, or just plain with good butter, or with cheese and your favorite jam... and no, they don't know who i am, i just liked their bread.