we took a superlong, close to 3 hr walk with the dog in the afternoon and managed to do it in sunshine. sun has been melting a lot of the snow, still plenty more to melt, though. this almost over flowing brook near the shack leads to one of the lakes in the area. this brook is normally nothing more than a ditch, now it barely holds the water coming downstreams. we will have to go back to this place next week to see if the bridge, on which i was standing when i took this pic, is still passable, there seemed to be plenty more snow and water upstream 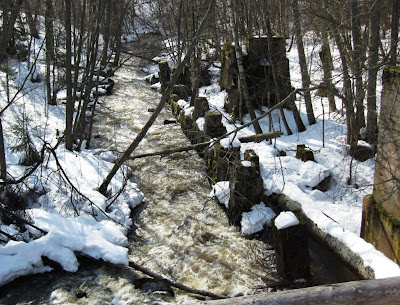 as much as i like the weather getting warmer, i hate the fact that in the spring i always seem to wear too much... it was +7C when we left for the walk but it was certainly a lot warmer in the sun 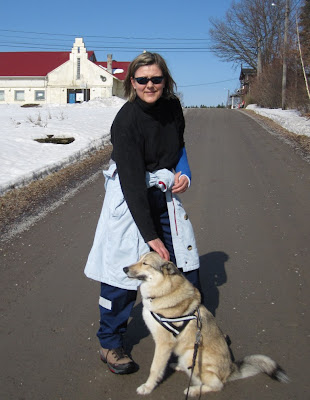 the daphne mezereum blooms before the leaves come out 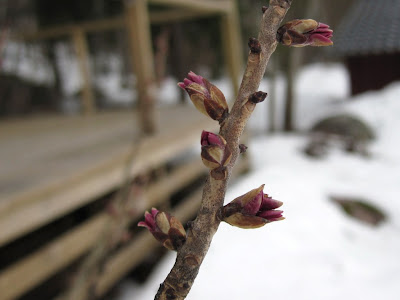 after such a long walk we needed something "fortifying"... limoncello with ice 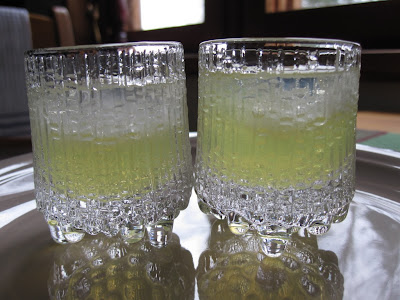 today it took exceptionally long to decide what i'd make with the chicken there was in the fridge, my mind was going blank on me. therefore, i took out my anna olson cookbooks, browsed thru them and decided on anna's chicken puttanesca. naturally, it would have been asking too much if i'd followed the recipe to a tee, had to twist it a bit.

as i had chicken breasts i used them instead of chicken thighs. i had some roasted peppers in the fridge so i added one, and switched the chili flakes for chipotle paste. there was no anchovy paste... 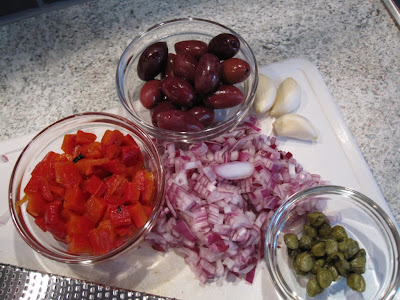 this might look like an ordinary roasted and peeled red pepper from a jar to you, but for us these are balkan peppers. the best i've had, so far, were in vukovar made by my then landlady from her homegrown peppers. i just wish i had paid more attention to what and how much she used to make the brine for her peppers... also, our landlady in pristina made quite nice ones as well. hers were a bit more smoky tasting and i'm sure certain someone still remembers how to peel a roasted pepper... he helped the landlady's son in law to peel bucketfulls of peppers! 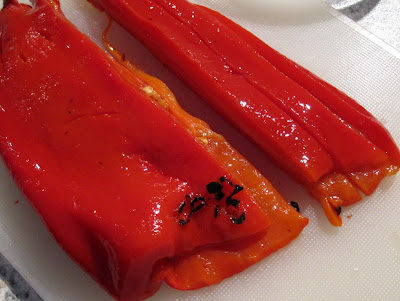 you must, by now, know how much i like my microplane grater? 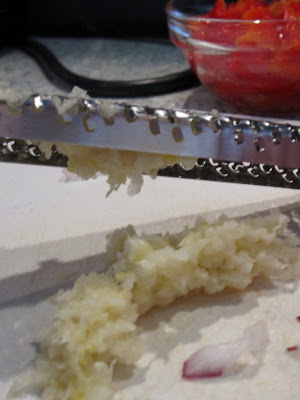 i'm not entirely sure why i bought this coconut oil...could be that the saleslady was good at her job...anyways and eventhough coconut isn't something i would ever use with this type of pasta sauce, i decided to try this oil for browning the chicken 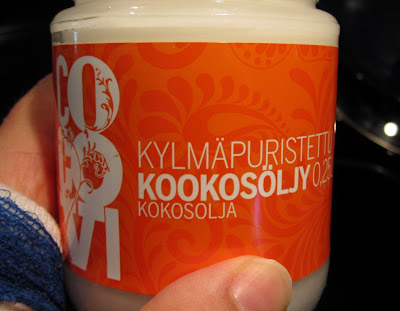 the oil worked great. certain someone tought that there was a hint of coconut taste in the sauce later, but i couldn't taste it. after browning the chicken pieces i took them out and sauteed the onion and garlic... 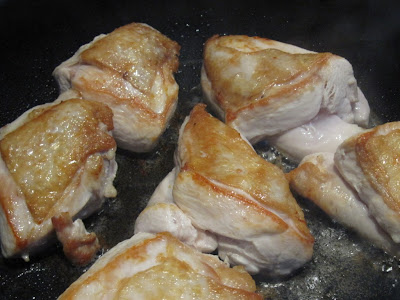 ...before adding 500 gr of crushed tomatoes and the roughly minced peppers, mixed well, put back the chicken pieces and cooked on low for 30 mins with the lid on 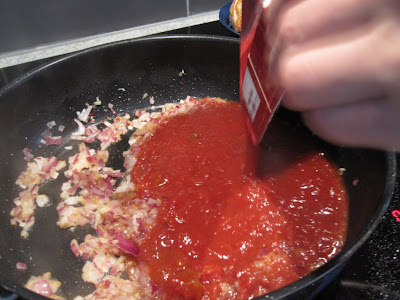 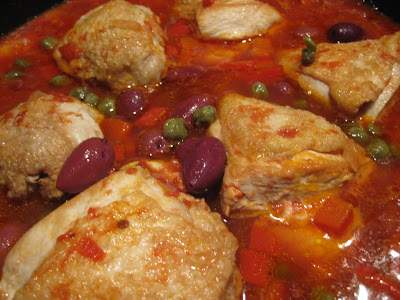 garnished with fresh basil on whole wheat pasta. gosh, this was good! on hindsight, despite the saltiness of capers and olives, the anchovy paste might have made this even better.

as for vegetarians, i see no reason why this couldn't be made without any meat... i'm thinking cubed eggplant browned in oil would work great with these flavours 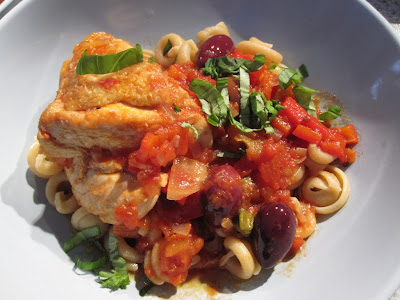 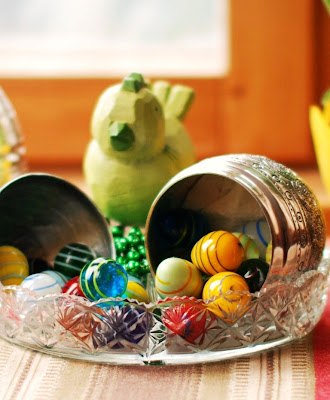 first, let me tell you, they replaced the cast on my arm today, there will be pictures of the raw flesh later... now, don't say i didn't warn you!

this next picture was taken yesterday around noon... it's the end of march... shouldn't it be spring already? however, i'm still convinced that spring, and summer eventually, will come. i'm more concerned as to how certain someone can manage the wait for his new harley... 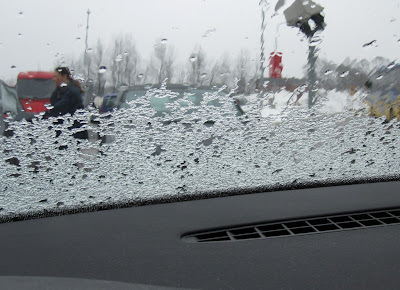 my ability to drive is not probably very high on the list of things you need, or even want to know but i will thank, again, my choice of transmission in my car all those years ago. there is no way i'd be driving a stick shift with this package. anyway, before my drive to my brother's i figured i needed something to support my arm, so i grabbed one of the pillows on my couch... a bit too fancy a fabric for a car, but the shape is perfect. i'm pleasantly surprised that my shoulders are doing fine despite the cast, i guess being a good patient and doing my exercises actually helps! 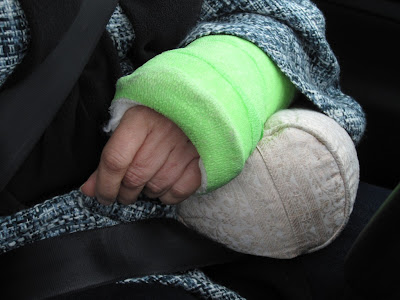 now would be a good time to skip two pics... if you don't want to look at what was revealed today at the hospital...quite a lot of padding in there 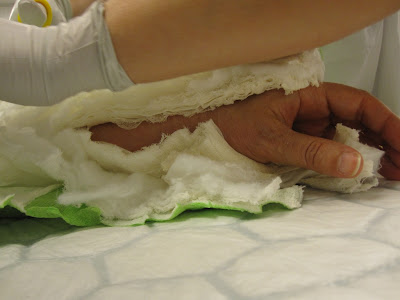 shortly after this picture, and after watching the stiches being removed, i asked if i could lay down...although, if you absolutely must pass out, hospital would be the perfect place to do it in 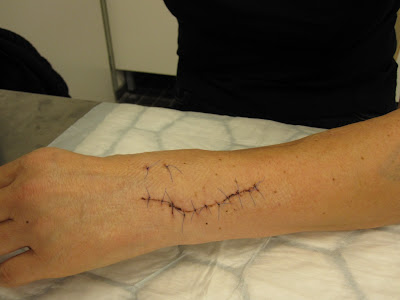 ta-daa! the new streamlined version of cast, it might even be possible to get a sleeve over this 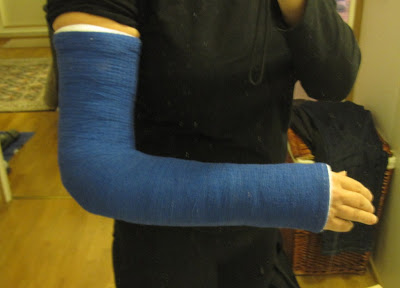 now that i've grossed you out, here's what i cooked, well baked for dinner 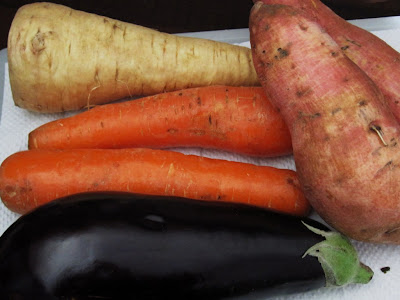 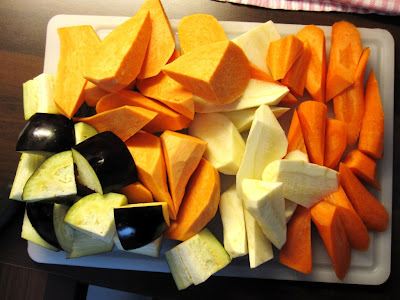 with olive oil and dried thyme 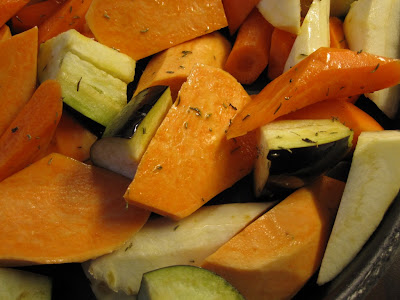 50 mins in 200C oven, so sweet, so jummy, and there's plenty left for lunch tomorrow. i haven't quite decided if i like these better hot straight from the oven or cold and mushed on a rye sandwich... 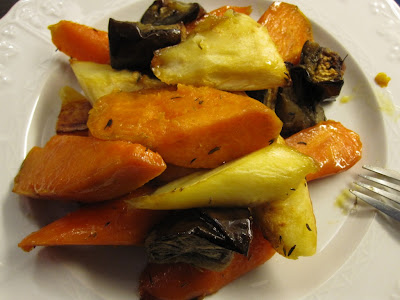 littlest niece ice skates. she and her club had a show today, she was one of the fairies in peter pan. my mom tells me that she did a splendid job as tiger lily, shame i couldn't be there to watch the show. i'd love to have seen her in full costume, wigs and all.

this picture is from thursday's practise. 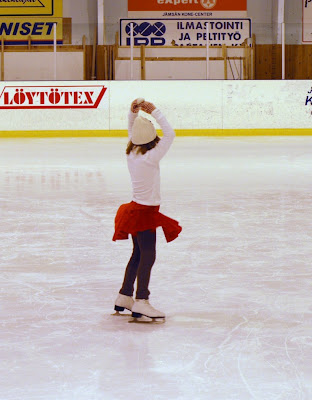 ps. no witches at the shack today... maybe it was the very wet weather or the dog barking outside. now i'm stuck with more chocolate eggs than is good for me...
Lähettänyt liisamarja klo 9:09 PM No comments: