jansson's temptation isn't particularly a summer dish as it involves an oven, but what the heck, it's cold outside so little extra heat in the house is a good thing! 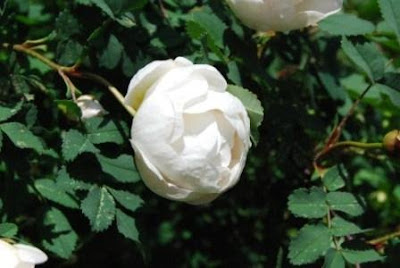 this is, or will be, the lovely pink peony 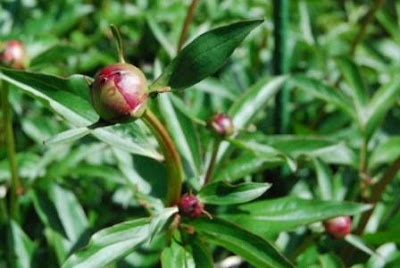 another slaw, this time i used cabbage, carrots, celery, spring onions and sunflower seeds, which add a nice bite 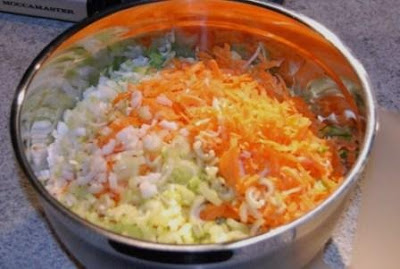 dressing was made of sour cream and mayo, plus some white pepper and salt, always good 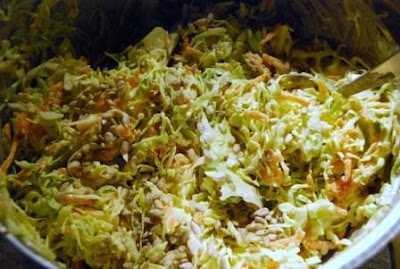 another all time favourite warm german potato salad. it's good also the next day, in case midsummer made you hung over... 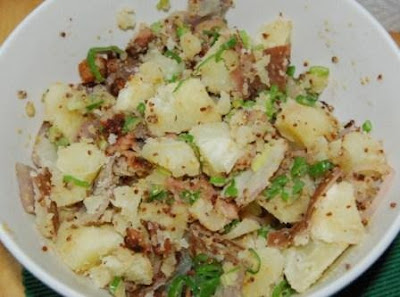 this is what you need for jansson's temptation, those are anchovies in the small bowl. the dish itself started out as "night food" and there are disputes as to who and where it originated, the US or sweden. there are not many occasions where i would side with the swedes, but this makes an exception 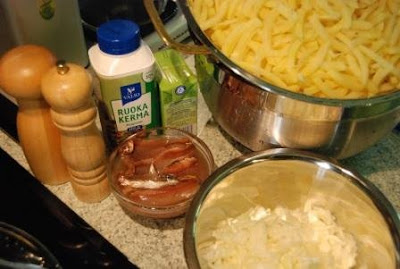 start by coarsly grating approx 1 kg potatoes, chopping one yellow onion, opening a tin of anchovies. place half of the potatoes on a baking dish, spread the chopped onion on top, add the anchovies, rest of the potatoes, pour the liquid of anchovies and 3 dl cream onto potatoes. i don't add any salt because you never know how salty the fish will be, sometimes (=when i remember) i put some white pepper in. bake in 200C oven for approx 40 to 60 mins, you'll need to taste the potatoes for doneness 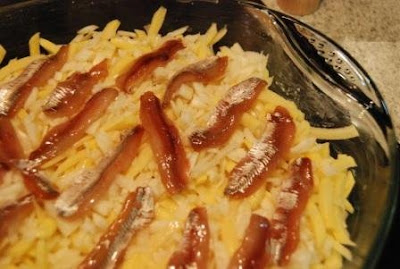 this dish demands pickled beets, these are last year's crop from cottage 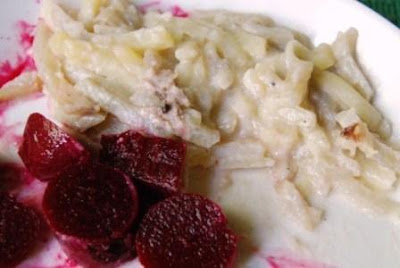 i've gotten hooked with the brown butter tart i've mentioned earlier. tried another version with nectarines, very nice. the nectarines have just a bit of tartness in them, goes well with the sweetness of the pastry and brown butter topping 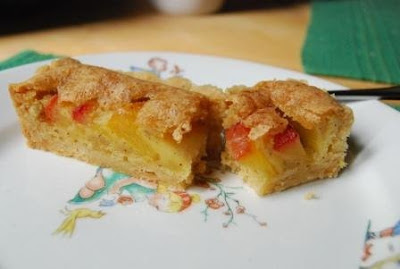 don't get me wrong, i'm not complaining about the weather, but it's mid-june and the temp is +12C, what kind of summer is that?

it was nicer a few days ago so i went to a garden center to get some potting plants and a rhodo for the corner where you turn into shacks yard. here it is, in case i have forgot to tell, i like pink. (i can't wait for the peonies to start blooming...) 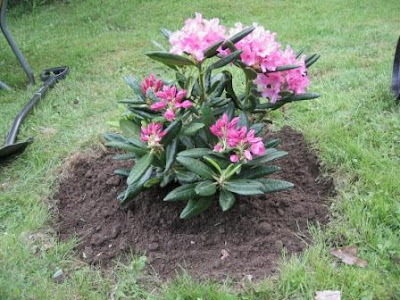 i got 4 different kind of plants for potting this year, reds and whites. this decision was made before i left for the garden center. i'm glad i did, i only have so many pots to use and the variety is just overwhelming, i would have gone crazy and taken whatever and too much. i had a plan on a piece of paper and i stuck to it, there is always a first! will post pictures of other pots later, they are not in their "prime" just yet. besides, it was getting late and the light turned weird 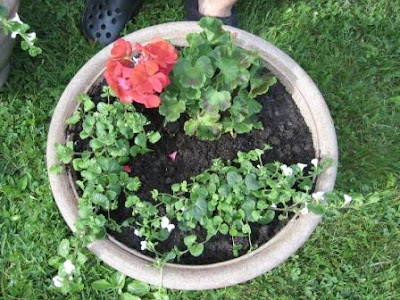 rhubarbs are going well enough to be harvested. the day started cloudy and chilly so i decided to bake a tart. as soon as i got pre-baking the crust done, sun came out ant it became hot and sticky. later on in the evening we got thunder, at least downtown we did. i used just the crust from the recipe in the link. i added some to the amounts thinking my tart pan was bigger in volume than the 9" one that is called for in the original recipe. that was unnecessary, but since i like the crust, it wasn't wasted. the crust is just the simplest tart crust ever, will definitely be using it with other fruit tarts 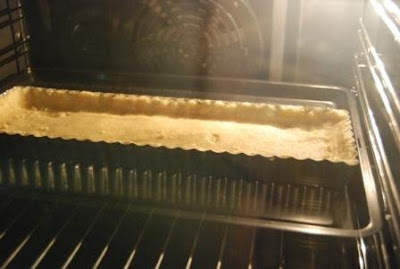 poaching the rhubard in little water and some sugar. i looked at different rhubard recipes to figure out how much sugar to use, but couldn't use that much as suggested in several of them. i measured the width of the tart pan and cut the rhubarb accordingly 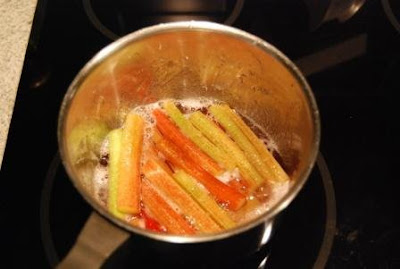 i originally wanted to make a vanilla custard type filling on which to place the rhubard, but i didn't have all ingredients to make one. i did have some sour cream and eggs so i made a "custard" of them (1 dl sour cream, one egg and 1 tps pure vanilla extract). first poured that on pre-baked crust then placed the poached rhubarbs on top adding the syrupy liquid last 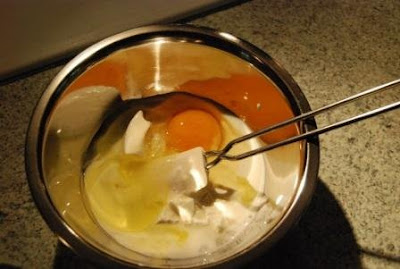 this is how it looks when done 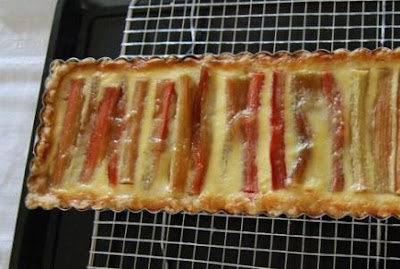 even though i didn't use that much sugar, the tart is really sweet but you can still taste tanginess of the rhubarb. the crust is buttery, crunchy, chewy and melts in your mouth. this is not something you eat more than one piece at a time, which makes it a perfect dessert. if you want to make it a fancy one, offer it slightly warm with some nice vanilla ice cream 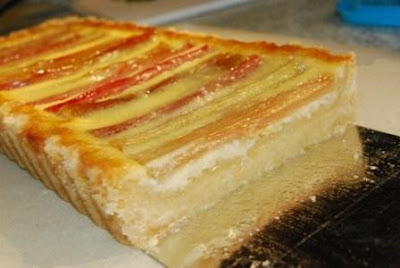 had some ground beef in the fridge and decided to make a pasta sauce of it: 400 gr of the beef, 1 yellow onion chopped, 3 gloves of garlic, 2 cans of crushed tomatoes, 3 carrots and 3 stalks of cellery in small dices, little salt and sugar and black pepper to season. start by sweating the onions, garlic, carrots and cellery, add the tomatoes and simmer for approx 30 mins. brown the ground beef and add to the tomatoes, simmer for another 30 mins, season to taste 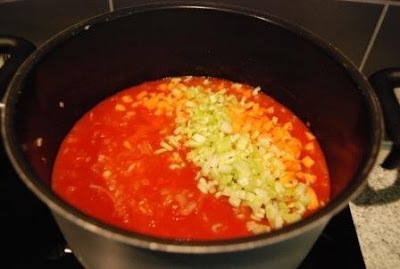 i have started buying whole grain pasta, which myllyn paras has some variety. here is the sauce and pasta ready to be served 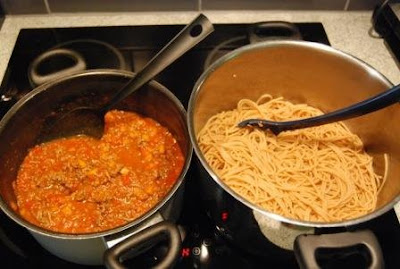 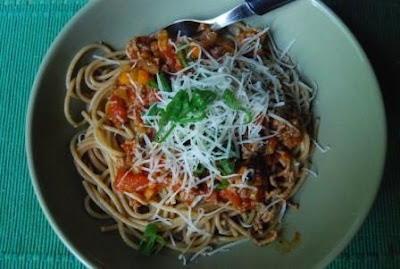 now that you've just eaten, i'll show you my compost bin... over the years i must have thrown away tons of organic waste that could have been composted. when you live in an apartment building that is kinda hard, unless your building provides a separate bin for that. nowadays, the law says that apt buildings of certain size must provide recycling bins, including one for bio-waste. my building has 5 different ones: paper, cardboard, bio-waste, energy waste and non-recyclables (not glass nor metal, though). the link offers plenty of information that everyone should know, and follow! i have this small bin in the kitchen for all scraps 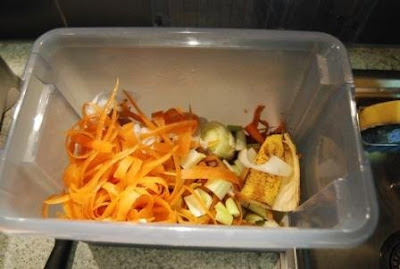 this is the big bin, composter that i bought to use at the shack. it was such a waste of waste! when ever i cook there's bound to be carrot and onion peels, egg shells, coffee filters, you name it. when you have a garden you always need mulch to improve the soil. this isn't physics, people have done this forever, ways before there were industrial fertilizers. being green in the modern world isn't always simple and easy but it's not impossible, but it's always better to do something than nothing at all!

you just need to make the choice and do whatever you can. sure, i drive all over, and i fly, but i do not toss out my used batteries with rest of my waste (nor should anyone else), i sort my waste, and try wherever possible to use the greenest product. one thing that really gets me, organic and green make-up from australia! c'mon people, it might be all that over there but not certainly here, on the other side of the planet. i need to calm down here, since i do know there is lots more i could do, like not buy that make-up, or out of season pruduce from south america. you have that choice as well, please use it 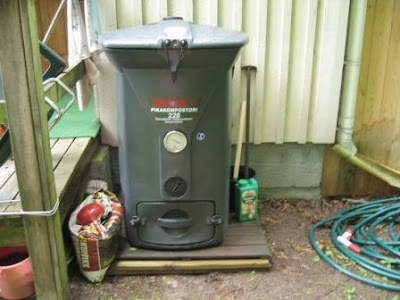 the bin is designed so that it remains warm enough during the winter for the composting process to go on. when the pointer is in red area, the compost is "alive and well". if not, there are tricks you can to do revive it 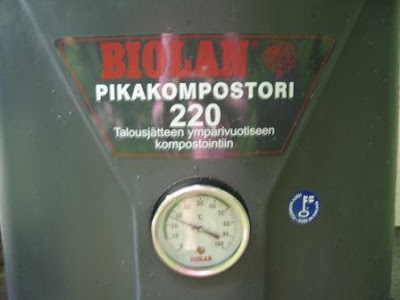 so far, my building doesn't offer bins for glass or metal, but those i store under the kitchen sink (both home and at the shack). here is the stash at the shack, it's time to get this sorted and taken to a collection point. i'm sure i have some at home as well 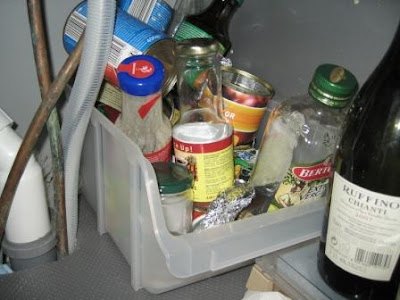 the dog, blissfully unaware of waste management issues of the world! 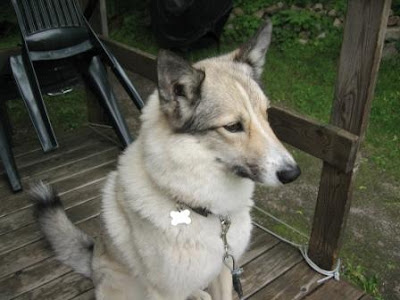 the spinach seems to love this wet weather and has therefore gone crazy. i'm off to pick some, again, and make some spinach pancakes, again, before work 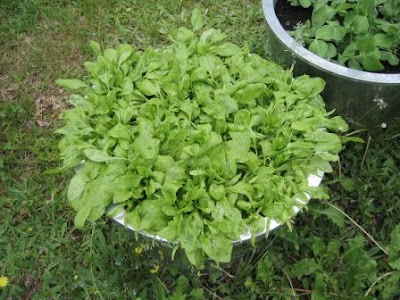 hope i'm not going to be late...
Lähettänyt liisamarja klo 11:26 AM No comments: