spring that is, some days it takes giant leaps. like monday, at 9.55 am these little ones were almost buried in the icy, slushy snow... 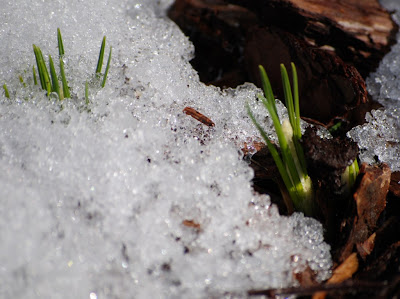 ...at 3.10 pm they were all exposed to the warming sun and the snow was but a memory. 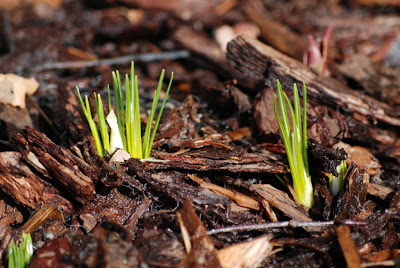 4 days later they are all out and beginning to bloom. 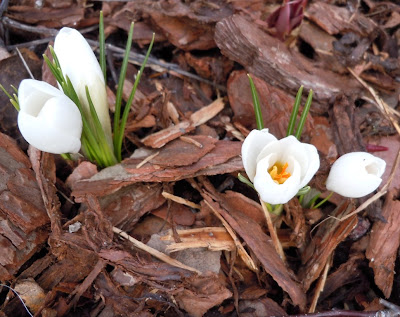 the dog is enjoying the warming sun, and keeping ferocious guard in the yard (poor squirrels). 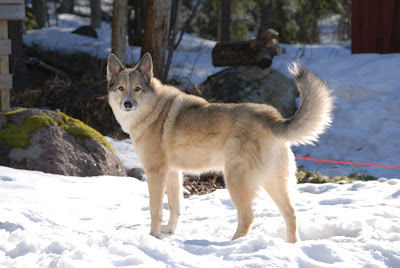 most of the herb garden is exposed, i think the sage and both the thymes (lemon and regular) survived winter, lemon thyme is very fragrant already. made me want to cook lemon chicken... 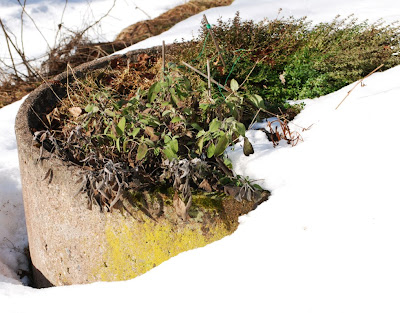 these tulips with funky color leaves are finding their way above ground, too. 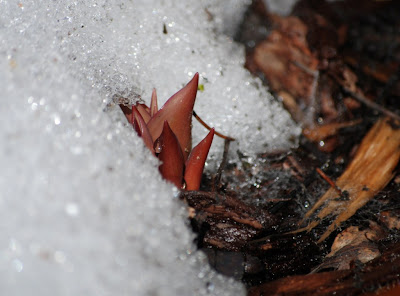 the dog couldn't care less about the tulips. 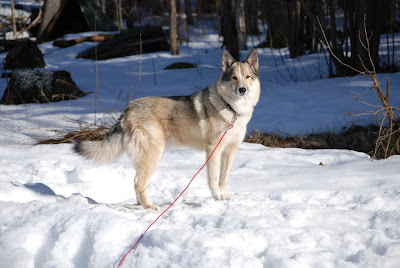 i found these by the house and vaguely remember planting some bulbs there, oh, four or five years ago. never seen these before, could be they bloom so early for such a short time that i've missed them! 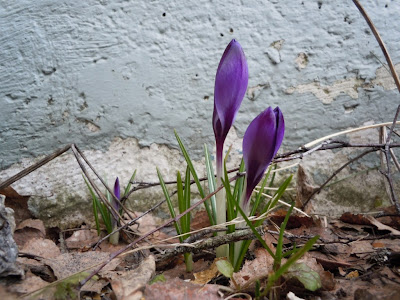 these are the buds of a tree onion. i found them on a brittle dry stalk and half buried them in the soil thinking they might have better chance of growing there. 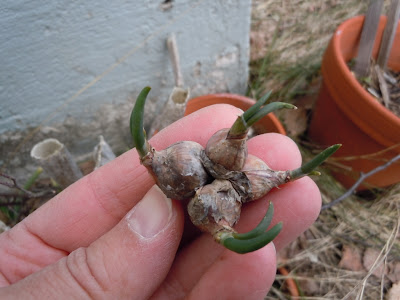 i wish i had had my camera ready to film how the dog "makes a bed" for himself in the snow. it is quite amusing and not a task he takes lightly. there is a lot of jumping up and down and scraping the snow before laying down. 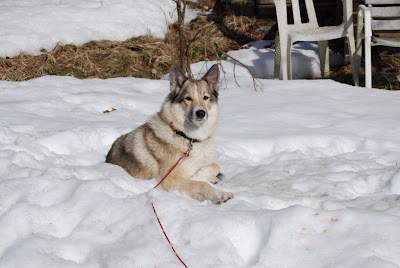 there are still a few places along the walks where the snow is almost belly-deep for the dog. had i known how deep the snow still is, i would have avoided that particular route. the dog was very happy in the snow (lots of deer and rabbit smells around) but my poor butt was aching for tramping in the snow. 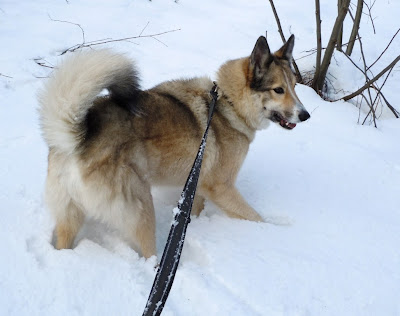 Lähettänyt liisamarja klo 10:44 AM No comments:

Email ThisBlogThis!Share to TwitterShare to FacebookShare to Pinterest
Tunnisteet: nature, plants, the dog

the other day i felt the need to have jansson's temptation for dinner but felt lazy. normally i would think that getting something pre-cut is a waste of money as you'll end up paying a lot more for potatoes and onions (needed in jansson's), but like i said, i felt lazy... 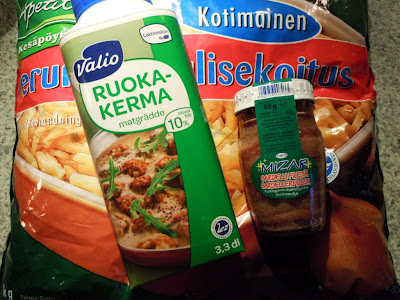 ...therefore got a 1kg package of frozen potato-onion mix from the store's freezer (jansson's is such a staple dish in finland, they sell the mix a lot, and the recipe is printed on the package). i thought i had a tin of anchovies at the shack but all i could find were a jar of "sardells"... closer inspection proved that they are the same, just prepared different. in a tin the fish would be packed in salty, vinegary and oily brine, which is ideal for seasoning jansson's. the jar lacked the vinegar, but i decided to use the oil anyway (duh! there wasn't anything else).

first poured half of the semi frozen potato-onion mix into a dish, spread the tiny fish on top... 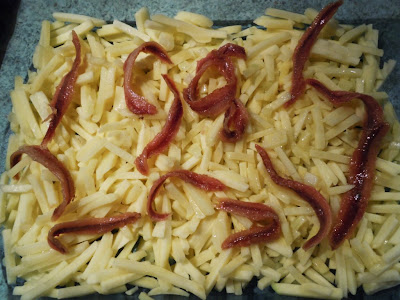 ...then poured in the other half of the mix, made it somewhat even, poured the oil from the jar all over, then poured the 3dl cooking cream all over as well. 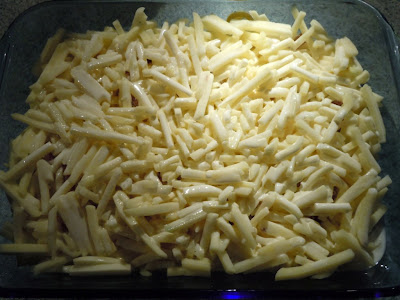 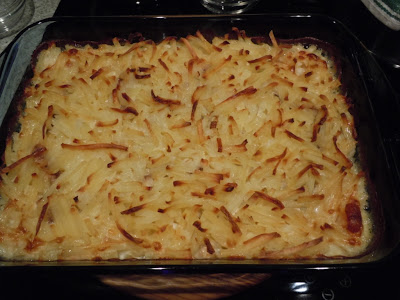 ...you get this bubbly goodness. 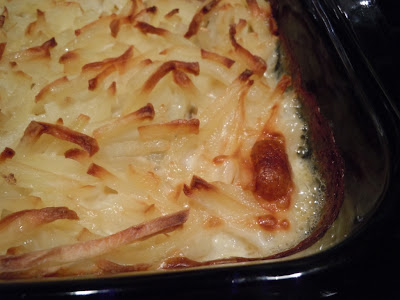 you'd be wise to wait a few minutes before digging in, you really don't want to burn your mouth (like i did). for me, you absolutely have to have pickled beets with jansson's. i know people who will eat jansson's with lingon berry jam, but it really doesn't need anything. if you think you don't like fish, well, by the time the dish has been bubbling away in the oven, the tiny pieces of fish have gone to mush and you almost don't even see them...love this dish (it's good even cold). 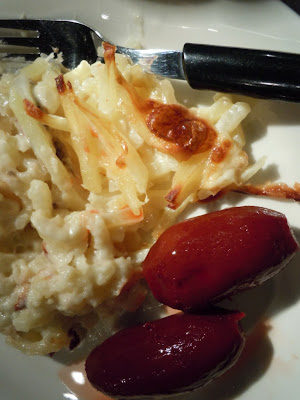 Lähettänyt liisamarja klo 11:12 AM No comments:

year of a tree

i wanted to record what happens around a tree during one year. i had been walking past this tree numerous times with the dog and thought it would make an interesting subject. my plan was to take a picture of the tree every time i passed it with the dog, from the same spot.

in the beginning, there were a few occasions on which i had to turn back to get the camera (quickly learned to check i had it with me). sometimes in the winter it was too late and dark to get a picture at all, and sometimes it was raining way too much to take out the camera. the dog quickly learned that we had to stop at this particular spot and waited patiently (a small miracle).