today it felt like spring is really here, we were busy working in the garden at the shack. well, there isn't much to be done with one hand but something anyways. will show all about the garden-work tomorrow.

for breakfast we had mushroom-tomato-mozzarella omelette, with basil 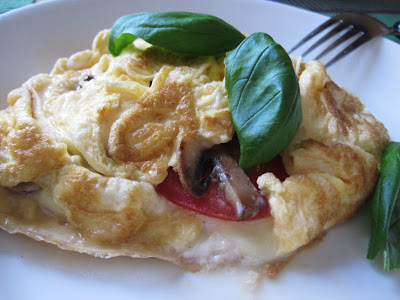 yesterday at the grocery store certain someone said he'd like some salmon so that's what we picked. the salmon file became our dinner tonight 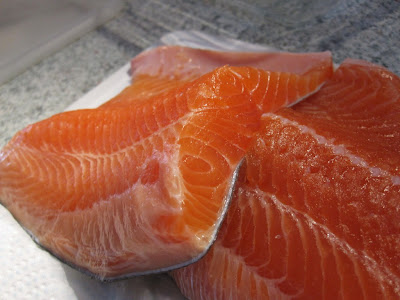 this was going to be as easy as it can get... took out some teriyaki sauce 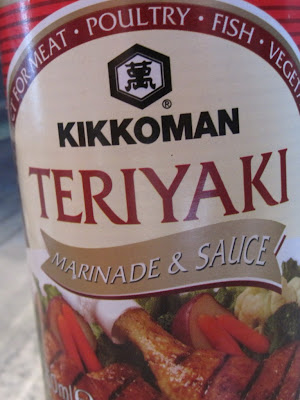 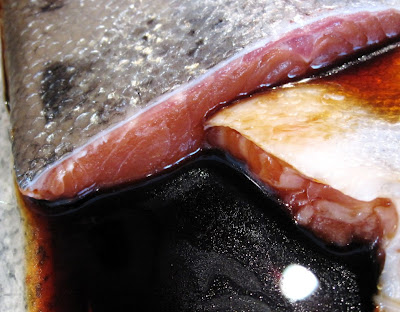 after couple of hours of marination, the salmon had got some deeper color 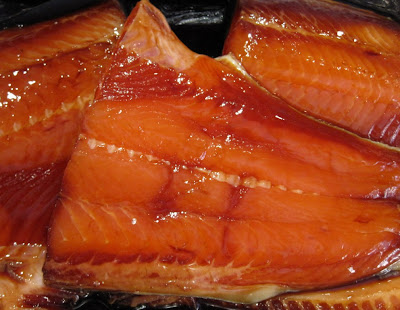 heat up the pan on medium high, seared the salmon flesh side first and then turned the pieces over and the heat to low. after 3 minutes i turned the heat off and put the lid on, as i didn't want to dry out the fish. this way i got perfect doneness, not too dry but still flaky 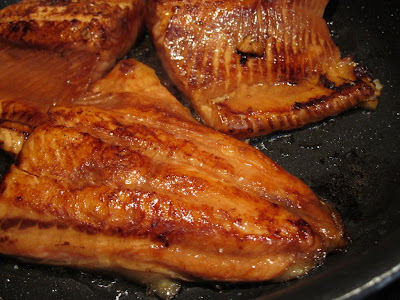 boiled some brown rice and steamed some broccoli to go with the salmon, served the rice and broccoli with sesame oil. i only drank half of that beer... 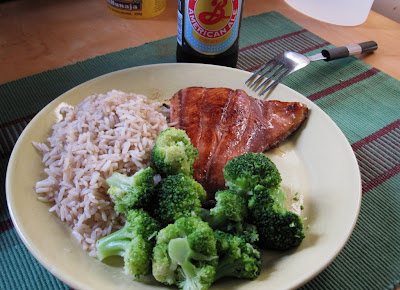 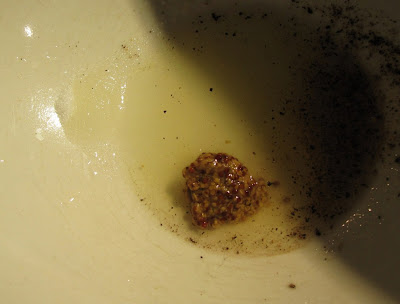 then just whip and there you have it! i usually make the dressing in the bowl i'm serving the salad in. one dish less to wash... 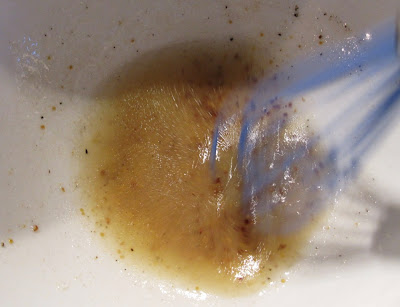 we got one apple tree pruned today and my neck is aching for all the looking up...
Lähettänyt liisamarja klo 8:55 PM No comments:

finally got rid of the huge cast yesterday and got this tiny one. it seems that i've also gotten rid of what used to be my left bicep. i must admit it wasn't that huge to start with but now it's nonexistent 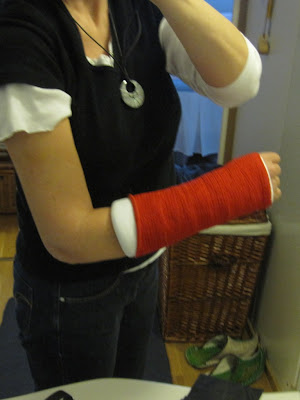 ok, the picture isn't that sharp but you get the idea. i had been positively surprised as so far there had not been much pain to speak of, just little discomfort with swelling. i'm afraid that the pain will start now when there is more movement. my elbow is rather stiff, but that was to be expected not being able to move it for almost 4 weeks, i'm sure physiotherapy will take care of that.

this little red number will be removed after two weeks... although i'm not sure it's still red at that time...
Lähettänyt liisamarja klo 1:09 PM No comments:

Email ThisBlogThis!Share to TwitterShare to FacebookShare to Pinterest
Tunnisteet: wrist

we had some lamb in the freezer but there were also 2 mallards that the great white hunter (certain someone) got last fall. we thought it was time to do something with the birds. also, although i don't have anything against chopping and such, i wanted to keep preparations to a minimum, therefore the menu was quite simple.

for a starter i made pears with blue cheese. found an inspirational recipe in the martha stewart living cookbook, the original classics, click here for that recipe. as there was only three of us for lunch (certain someone's mom was the third) i didn't want a huge starter, therefore not a whole wheel of camembert but just a tiny bit of very mild blue cheese. let me make one thing clear, the brandy was for the dressing, not for the cook 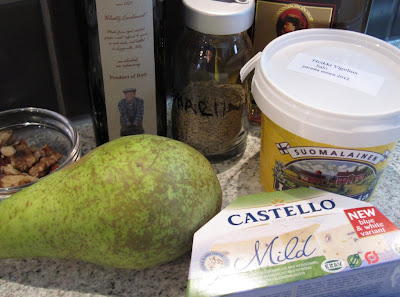 started by peeling and dicing one (very ripe) pear, then sauteed it in 1 tbsp butter (who said this would be light...) for a couple of minutes on medium heat, then added 1 tbsp of brandy and sauteed for another minute.

meanwhile, i tore up some romaine lettuce, divided it on 3 plates, placed 2 slices of blue cheese on each plate, then divided the diced pear among the 3 plates. then returned the pan to medium heat, added 1 tbsp of honey and 2 tbsp of balsamic vinegar, brought that to a boil and poured on pears.

some of you might have noticed the walnuts in the previous picture... well, my intention was to garnish the plates with them but i sort of forgot... 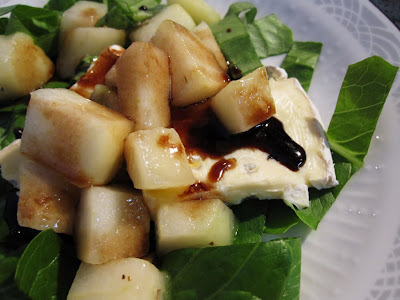 these dried funnel chanterelles got soaked and used in a risotto 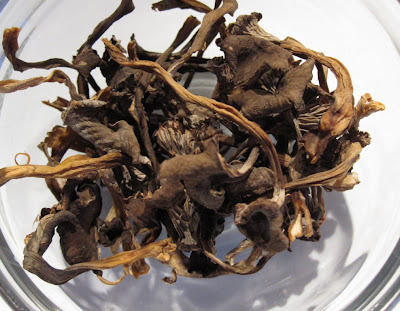 these went into my risotto, the soaked mushrooms, red onion (yellow onion would have looked nicer) butter and white wine, among chicken stock, etc 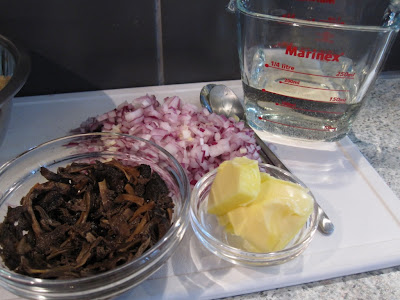 cooked the risotto almost according to package instructions, quite nice if i may say so myself (could also be the amount of butter and cream in it...) 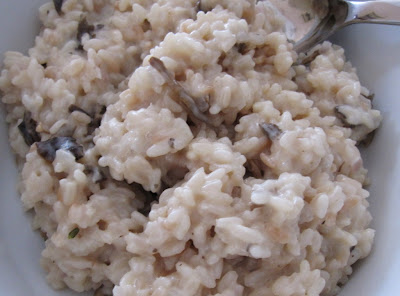 and now the main event, the mallards. certain someone had plucked them before freezing but they still needed some tidying up. i had not eaten, let alone cooked mallard before so this was adventurous 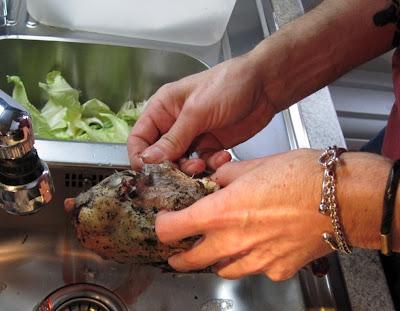 i had checked several cookbooks and we decided on first browning the birds on pan in butter, then cooking them in 200C oven on a roasting pan with an onion, carrot and some brown stock, turning occasionally and basting with the stock. the only seasoning was some salt and pepper inside the birds 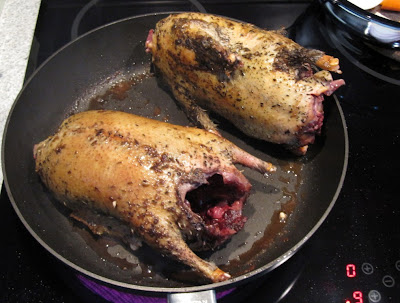 i have no idea how it should have looked, ours turned out like this. i think for an ultimate presentation all the stubbs of feathers should have been removed before cooking. but as we were not going to eat the skin anyway (it was there just to make sure the meat would not dry up) it was fine. the meat tasted like very mild game, and was very tender, so i guess we managed to cook it fairly well. certain someone may try his luck again in august when the next season for mallards and such start 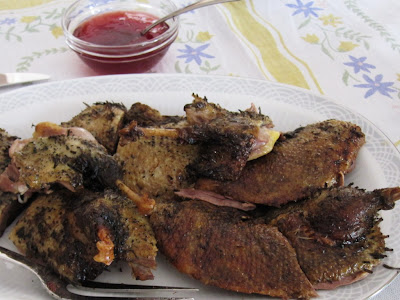 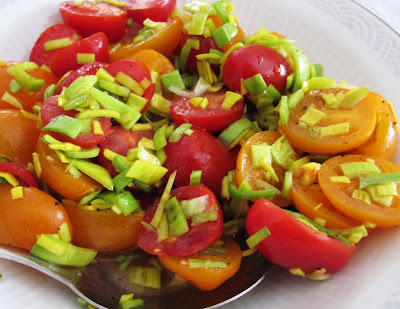 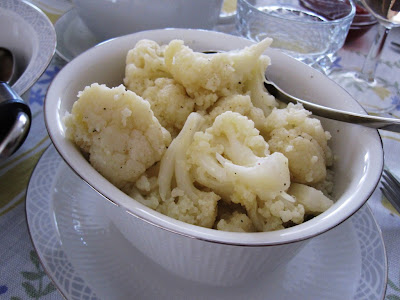 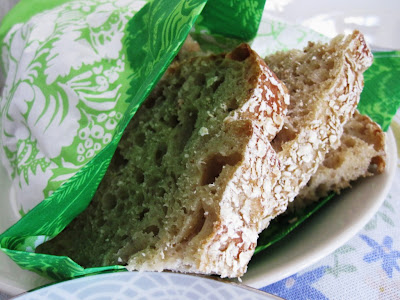 it is so good. if you think you don't know how to bake a bread, give it a try, you'll amaze yourself, honestly 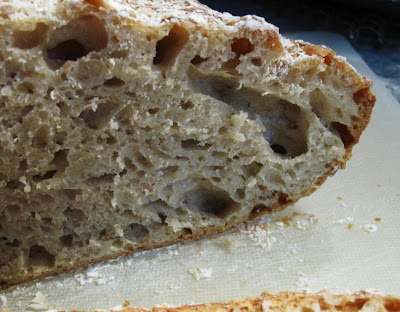 the chocolate cupcakes (slightly warmed in the oven) and old-fasnioned vanilla ice cream, and port wine 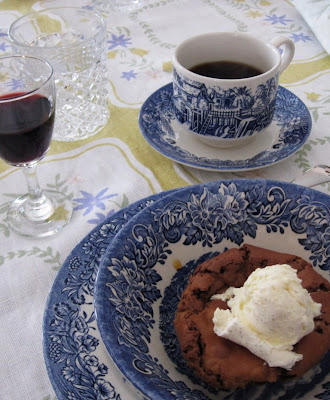 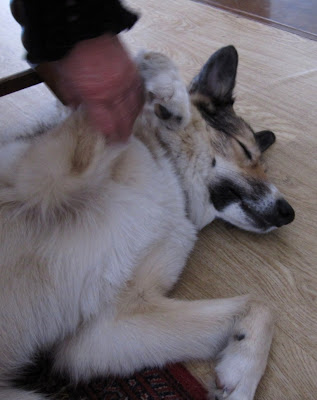 the easter bunny made a surprise (and compassionate) visit 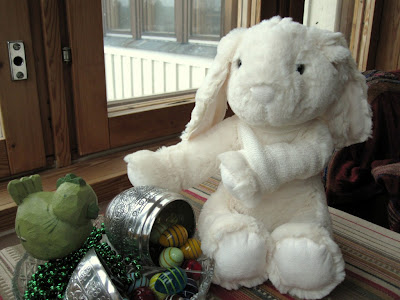 Lähettänyt liisamarja klo 10:04 AM No comments:

what do chocolate cupcakes and shrimp cocktails have in common? nothing that i can think of, other than i made both yesterday...

the cupcakes are from the cupcake book that i got at xmas. this particular recipe isn't on the web, but it's very close to marthas brownie recipe i've been using, little less butter, little more flour. the recipe said it would make 12 cupcakes and that's what i was prepared for.

silly me, i thought the author being british, that one cupcake would be a normal size cupcake, not one of those monstreous american cupcakes... so instead of 12 i got 17. well, served me right for not reading the foreword before starting 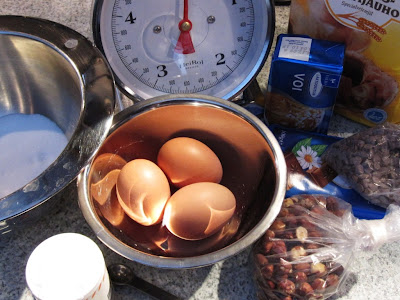 i felt you really needed to see this goodness up close... (not telling you how many i ate still warm from the oven) and the smell, it was pure heaven! 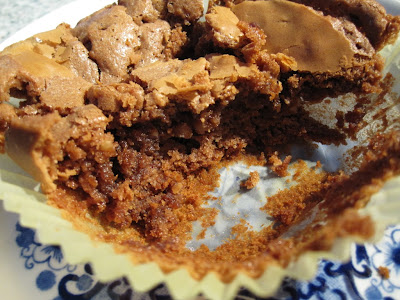 well, you can't live on cupcakes alone (though i'd be tempted to try...) so i made us a "light salad" for dinner. first crossed the avocados (one for each) with a knife, then carved the meat out into a bowl, poured the juice of half a lemon on top and sprinkled on some chili powder and mixed well 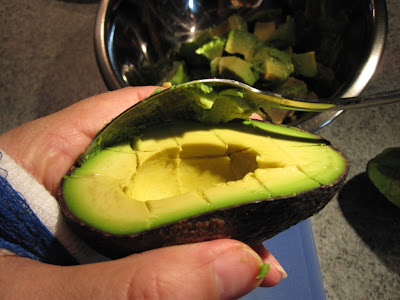 then placed some greens on plates, placed the now empty avocado peel in center and filled it with sour cream dressing (2 dl of sour cream, chili powder to taste, 1 tsp ketchup), placed some shrimps on the dressing, bigger shrimps around the peel of avocado and avocado cubes here and there. isn't it pretty? it would have been perfection if i'd had some fresh dill to garnich with 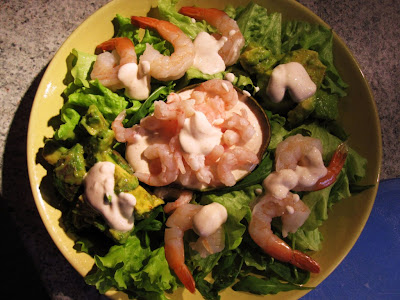 does this really need words? 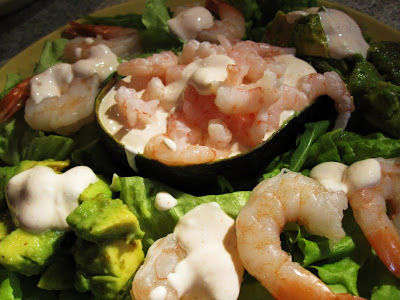