got the little cute green bird as a gift, it's from pentik, as are the glass eggs which i got last year. metal eggs are from indiska, also last year. 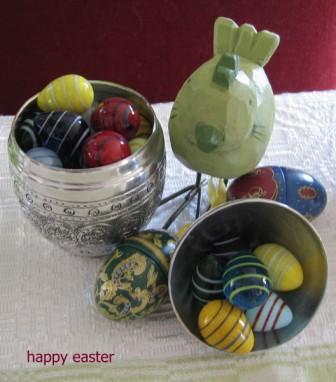 was supposed to work this easter but my left wrist got sore, well it's been sore since january, anyways, sore enought that i went to the doctor's. got 1 week off, we think it's carpal tunnel and since pain killers are out, i've been treating the wrist with felden, and now the wrist is turning yellow... been also wearing a rehband support wrist band, which is great but limits movement 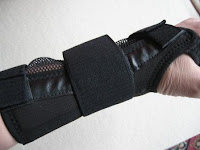 because of the wrist easter menu wasn't as elaborate as i would have liked it to be. this is what got done with one and a half hands, medley of kitchen machines and very little effort


for starters, hummus and oven baked eggplant and spanish peppers. hummus was easy enough: 1 can of chickpeas, tahini, garlic, lemon juice, some chili and jeera, salt and black pepper, olive oil into a blender and prrr, there it was. inspiration was from jamie oliver's book the naked chef. eggplant and peppers were done under the broiler in the oven, tossed with olive oil, tiny bit of garlic, salt and pepper, splash of apple sider vinegar. both hummus and eggplant/pepper salads were made the day before, hummus got smoked paprika and eggplant/peppers some parsley as garnishes. most difficult part was peeling the peppers and you all know that ain't hard 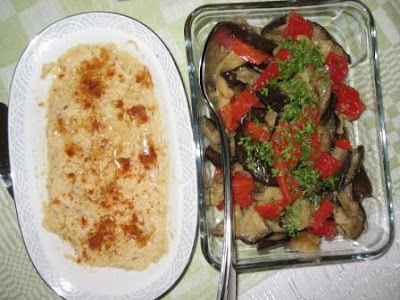 now the lamb... hmm, as a rule i don't eat lamb, don't like the taste too much, but my lamb, it turned out ok even for my taste. i ate it, took seconds, but there is a limit of how much lamb i'll eat, not like some other foods (ice cream and chocolate come to mind first!) this leg of lamb (finnish, from roslund) swam overnight in lemon juice, olive oil, mint, garlic (loads of it), thyme and salt. another adaptation from jamie oliver. usually i put meats in a roasting bag to keep the meat juicy. this time i didn't use one and was pleasantly surprised, the meat turned out just perfect. later on, i did realize the real reason why i like the bags, the oven needed a scrub... 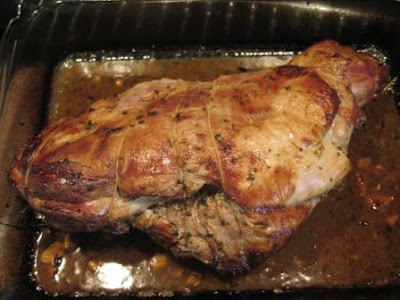 the lamb got company from roasted potatoes, carrots and parsnips 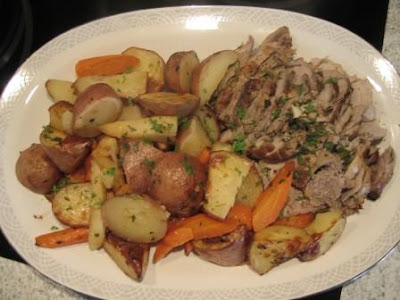 dessert was a very retro and super easy fruit salad, just open a few cans (pineapple and peach), dice a pear or two, add some orange, grapes and a banana (or any combination of fruits you like or happen to have) and a spoonfull of grandmother mami's secret indredient, brandy. when i was a kid we used to go to my dad's parents for sunday dinners, fruit salad was one of the foods i remember from that time. oh, and mami's pork chops, and stroganoff... just to name a few 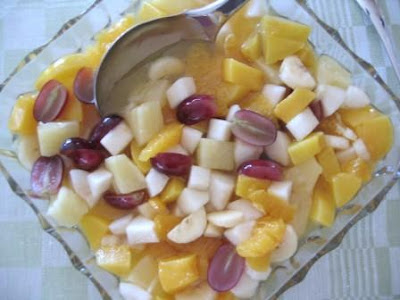 later on, this sour lemon cake from the latest issue of donna hay magazine was served with coffee. this must be the easiest cake, just put all ingredients into a bowl, mix, pour into cake tin and bake 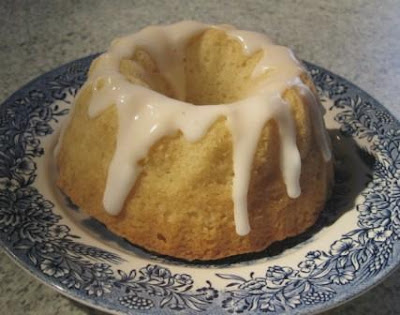 this was earlier from the week, salmon soup with a tad of thai. started with fennel, leek, potatoes that were boiled in fish stock. when they were almost done, lemongrass and tom yam pastes were added, heat was turned off, 1" cubes of salmon added to the hot soup. as with any fish, you don't wat to over cook it, the salmon cooked perfect in 10 mins in the hot soup, delish! 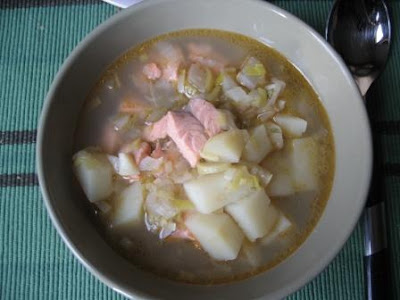